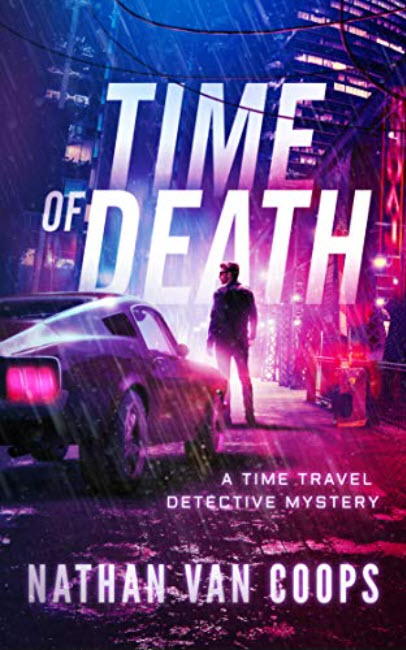 A young widow hires Greyson Travers, a private detective, to investigate the suicide of her husband. Since she does not believe her husband would commit suicide, she thinks it was murder, but she has no proof. Travers has a great reputation for solving crimes, so she hires him to figure out what happened.

What she does not know, of course, is that Travers is a time traveler. Rather than figuring out what might have happened, he simply goes back to the time and place of the crime and watches it happen. What could be simpler?

He quickly realizes that the crime is much more complicated than it appears, and there are other time-traveling criminals involved.  He quickly finds himself ensnared by the mob and some very dangerous characters who use time travel to commit crimes.

Greyson Travers is the son of Ben and Mym Travers of Van Coops’ In Time Like These series of books, all of which I found highly readable. It is not necessary to read those books before enjoying Time of Death. It stands alone, and the author slowly introduces the concepts of time travel of the In Times Like These universe without it getting in our faces.

I have read all of those books, and if you’re interested, here is a summary of my reviews. You can click on the titles to jump right to them.

Time of Death is basically a murder mystery and it deals with a heist.

There was only one issue I had with the plot. The mob figures in the story have the ability to travel in time, but they organize this weird heist to collect cash from a casino. Seriously, if I were a time traveler, it would be so much easier to get rich, without hurting anyone, without cheating anyone else. Why not go back to 1980 and buy some Apple stock? Then come back to 2022 and enjoy the fruits of that decision. Oh well, there would be no murder mystery then.

I enjoyed all of Nathan Van Coops’ books, and I rated them all between 2 and 3 stars. They are always very readable and fast-paced. Time of Death is a fairly short book and a quick, fun read.