The Warp Clock is the fourth book in what I now call the Ben Travers Series of books. The others were:

In The Warp Clock, Ben Travers comes back with a vengeance. 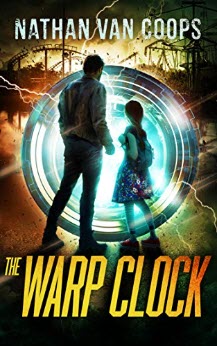 After the so-so The Day After Never, which ventured into foo-foo time travel, Van Coops is back with a time travel thriller about time travel all the way.

A group of convicts and criminals has banded together in a set of remote timestreams using decommissioned time gates from the Chronothons. They are working on changing history mostly with the objective of enriching themselves, but under the pretense of making the world a better place. They are kidnapping historical figures, like Hitler and Genghis Khan, putting them into an arena a-la-Colosseum and making them fight each other for their lives, to the pleasure of the onlookers. It’s not a happy world. Ben and Mym, and their daughter Piper, are trapped in this nightmare of a world from which they can only escape through a tricky sequence of – you guessed it – time travel jumps that make your mind bend.

It’s all worth it. The book is written in the first person present tense, which gives it a rapid-fire feeling. The action drives forward from sentence to sentence, giving it a truly breathless pace.

Of course, there is also Dr. Quickly and a cameo appearance of Cowboy Bob in Montana and his housekeeper Connie. The old band is back together.

I would not recommend reading this book out of order. If you’re interested in the Ben Travers series, you really need to start with In Times Like These, where Time Travel 101 is the course and anchors are the lesson. Then work your way up. The Warp Clock, as the first book, would likely leave you confused or lost.