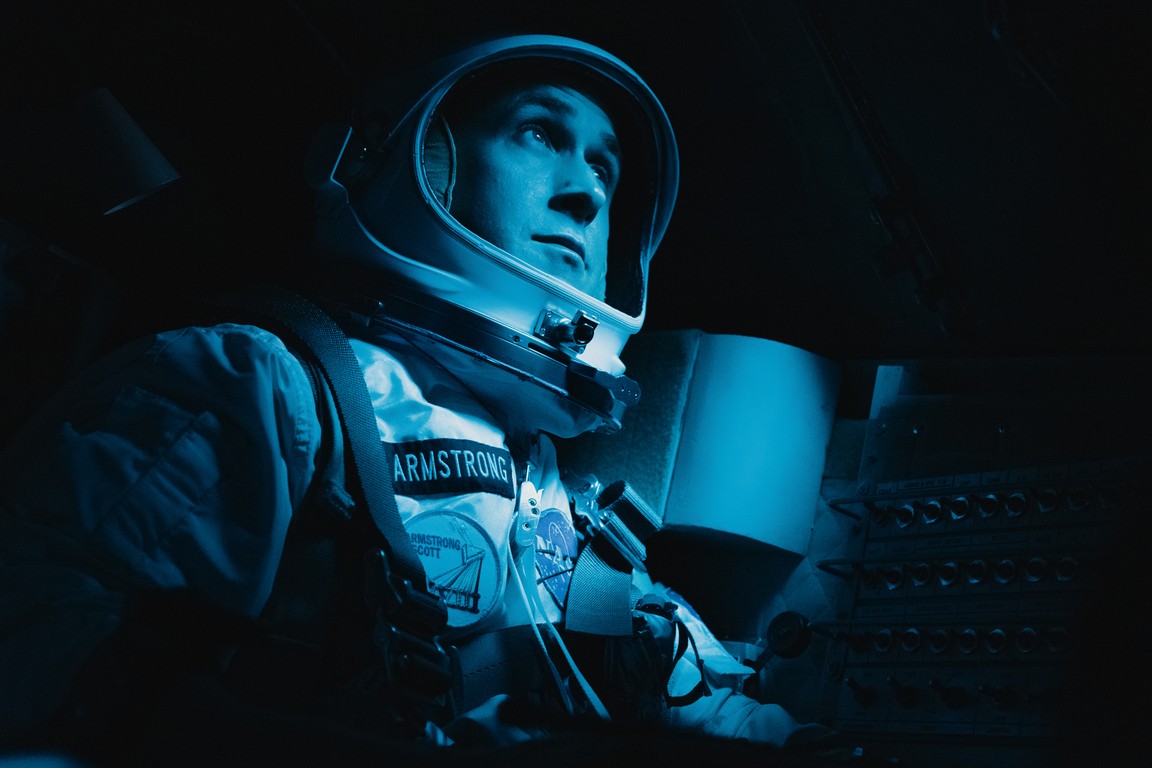 First Man follows Neil Armstrong from 1961 to 1969 on his journey to be the first man to step on the moon.

We are in the space capsule with Armstrong and his fellow astronauts as they are launched, and we are in the homes and at backyard BBQs of the men and women in the early space program.

In the media, and in our nostalgic memories, we think of going into space as a romantic endeavor. Watching First Man changes this, as we witness the tremendous forces acting on the fragile human body as it is strapped into a couch on top of a gigantic rocket. We see the fear and the emotional and physical stress in the eyes of the astronauts as they embark on missions where a million moving parts have to hold together, and a million sequences of events have to work perfectly, over a period of many days, and where any failure of any type results in catastrophe – and death of the astronauts.

Armstrong was a cool dude who did not get rattled, either by a crash during a test flight of his experimental craft from which he bailed out literally a fraction of a second before it exploded, nor by the fury and agony of his wife who chastises him when he does not want to face his boys before leaving on his historic journey. History has shown that Armstrong’s steel nerves and calm under pressure made the mission successful.

I was a twelve-year-old boy who was allowed to stay up all night on July 20, 1969. Armstrong stepped onto the moon in the wee hours of the morning local time in Germany. And I remember being in awe, and being inspired, and looking forward to a life where I knew I would eventually be able to travel to the moon as tourist and visit the Apollo-11 landing site as a historic museum exhibit. It is now over 49 years later, and I realize that I had no idea that the Apollo landings would not just be the first landings on the moon, but  possibly also the last ones – in my lifetime.

I enjoyed First Man a lot. I have come criticisms. This is a movie review, after all:

I liked the flying and technical scenes, and I didn’t care too much about all the stuff at home and in the back yard. The acting was okay, but didn’t blow me away.

We saw a lot of footage of shake, rattle and roll, first in 1961 when Armstrong did a test flight in an X-15 where he literally skipped outside of the atmosphere by accident, then during the Gemini launch, then when the capsule went into an uncontrolled roll, and finally, when Apollo-11 launched. There was too much footage of launches from the point of view of the astronauts, but no re-entries, no landings, no recovery on the water, all the good stuff. The missions jumped forward days at a time skipping sequences that would have been interesting to me. There wasn’t a single shot of the large, looming moon during the journey there, nor any expression of awe by the journeyers. The real action that I was there to see went by too fast.

We caught glimpses of the life of Neil Armstrong and his family, but we didn’t get a good enough look at the space program, and that’s what I went to see when I bought the ticket for First Man. It was a long movie, at 138 minutes, and those minutes could have been used more effectively.

That being said, I am glad I went.