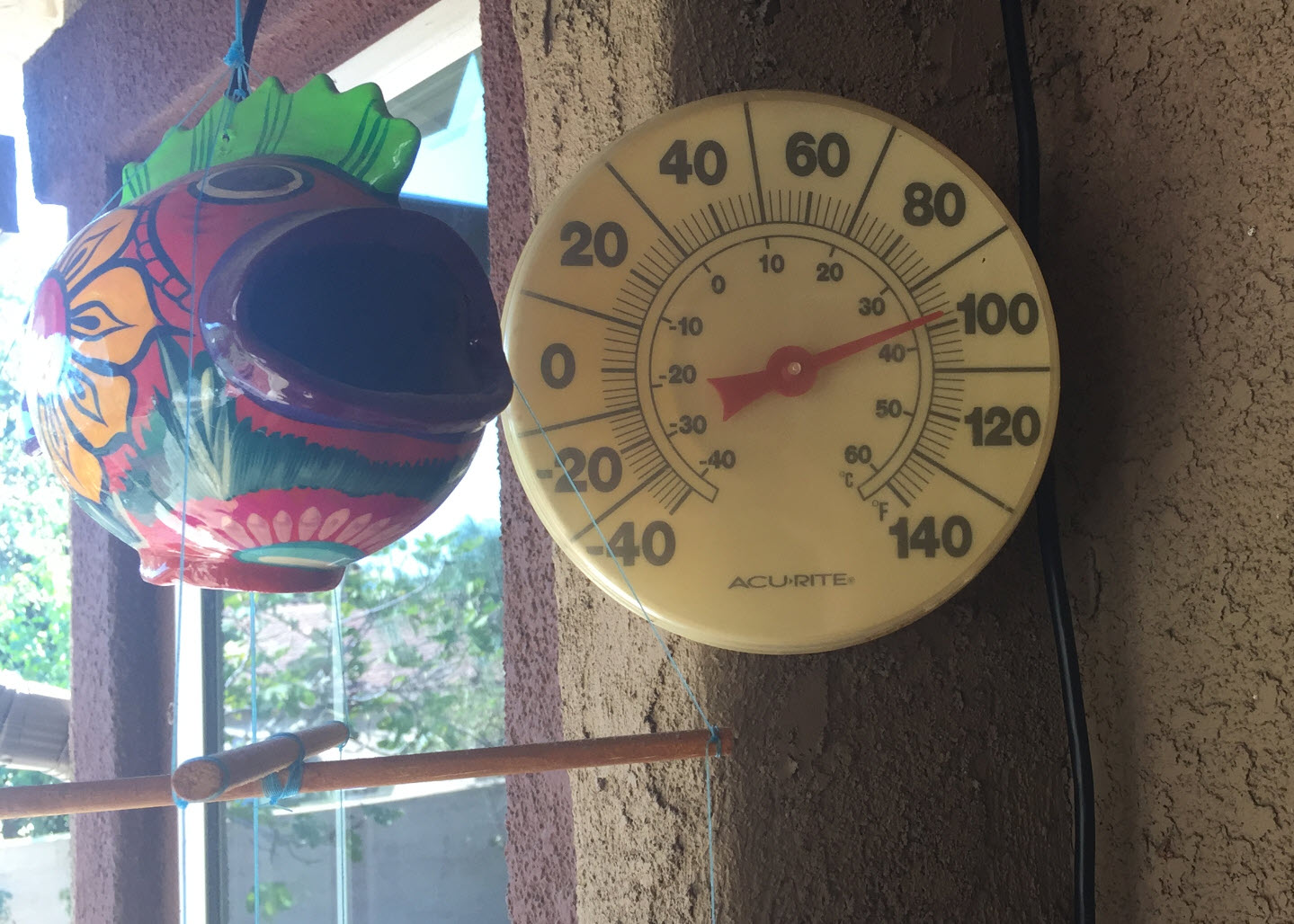 Looking out our window this afternoon to our shaded porch, it was 98 degrees F.

And it has nothing to do with our not raking leaves in the forests.

Most of California is desert, not forests, anyway. 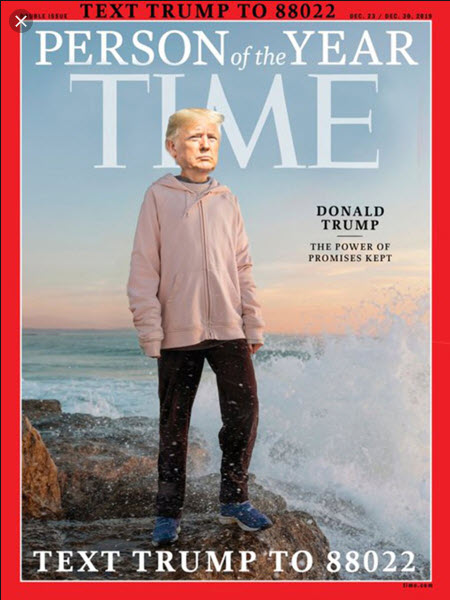 I was in disbelief. I googled and fact-checked. This really happened.

When Trump was passed over for Time Magazine’s 2019 Person of the Year in favor of Greta Thunberg, a 16-year-old Swedish student who has risen to international fame for her powerful climate activism, his campaign eventually edited Trump’s head on Greta’s body on a fake cover of Time Magazine, framed in a Trump campaign text message.

I have two questions:

Why doesn’t Trump invite the girl to the White House, congratulate her on her success, get to know her, and ask her questions about how he could help her with her mission? That is what any president in the history of our country would have done.

There are thousands of scientists all over the world who study our climate and of course climate change. The overwhelming consensus is that humans play a significant role in global warming.

There are some people that want us to believe that the world isn’t warming right now, partly because the way we are measuring temperature is not right. For instance, some people argue that thermometers are mostly distributed in the northern hemisphere and there are not very many in the south, so while we’re thinking the earth is warming, we’re not actually sure it is. To me this seems like a crazy, far-fetched idea. It would imply that all those thousands of people measuring temperature around the world haven’t taken that into consideration and are deliberately ignoring this fact.

Whether the earth is actually warming or not, the glaciers are definitely disappearing. That even I can see with my amateur eye. Take any glacier picture from 10 years ago and from today, and you can see the difference pretty obviously, and it seems to be happening in the southern hemisphere, too. If it’s not temperature that’s melting the glaciers, what is?

Two points: The CO2 level took hundreds of thousands of years to go from lower levels to over 400 ppm, and then back down again. Our latest grand change took 50 years. That gives me pause.

Second point: 800,000 years ago, when we had CO2 levels of 400 ppm, the seas were 50 feet higher. Most of Manhattan would be under water, all of Miami, all of Boston, all of Los Angeles, and much of San Francisco, San Diego and Seattle.

The so-called climate deniers argue that somehow scientists are in a conspiracy. They are falsifying findings to make money.

I am not buying it.

.@EPAScottPruitt says #climatechange is good for us. Would he say that to:
-families who lost their homes due to extreme weather?
-communities displaced by rising sea levels?
-parents with children who suffer from asthma worsened by air pollution?https://t.co/OvsnOzsUIn

He is willing to risk world stability for his own benefit.

After pulling out of the Paris Climate Accord, Trump and Pruitt have been announcing that this would create lots of American jobs.

On Meet the Press on Sunday, Pruitt said that since the fourth quarter of last year to most recently, we have added almost 50,000 jobs in the coal sector.

This statement is completely wrong. There are only about 51,000 jobs in the entire coal industry in the U.S. Last month, 400 coal jobs were added. The entire U.S. mining sector added 7,000 jobs last month or 50,000 since the 4th quarter of 2016. Perhaps that was the figure Pruitt was quoting, but he carefully misquoted it so the numbers were vastly inflated.

Trump and Pruitt seem to be building up fossil fuel industries as massive job creators, which is just flat wrong. In comparison, just look at Tesla, just one company, which has over 1,800 job openings in the U.S. right now. Tesla is not known for its exciting benefits and great wages, but their high-pressure jobs in factories must be at least as good as coal mining jobs. If you had to pick a job, working in a coal mine or working for Tesla, which would you pick?

Coal is dead. It’s a dead industry, and no amount of deregulation is going to bring it back. Trump and the EPA can do whatever they want, we’re going to be buying less and less coal, and coal jobs will continue to disappear. The people are deciding, not Trump.

If you think science and education are expensive, try ignorance.

Just glance at this chart and you can see several phenomena:

Rex Tillerson used the fake email name Wayne Tracker (his middle name is Wayne) within the Exxon email system for dialogs about global warming and how it could affect Exxon’s business. Of course, we have seen smoking gun documents from within the fossil fuel industry for decades about global warming, just like we saw tobacco documents in that industry in prior decades, before we all got smart.

Now you can’t smoke in public buildings anywhere in the United States. We have come to accept the reality that has been there all along, even though the tobacco lobby obfuscated it for decades and fought against it.

My question is: Why would Tillerson use a fake name? Is it because the CEO of Exxon can’t be seen discussing climate change issues within Exxon?

We have elected a clown president. With every new day it looks like we have also elected a crook president. We are still waiting for the truth to come out. Regarding climate change, Trump’s election may actually be a good thing, in the long run, because there is no way this issue will remain obfuscated with the international flood lights now shining on this issue from all directions. Climate change will be settled once and for all, and if the president and his cabinet are a bunch of crooks, as it is starting to look, they’ll eventually all be thrown out and the country can heal again.

They railed about Clinton being corrupt, and as I learn more I tend to agree, but for Trump to call Clinton corrupt….

Well, we all have heard about the kettle, haven’t we?

We now have put Scott Pruitt, who has made a career of suing the EPA as Oklahoma’s attorney general, who is a climate change denier – contrary to his own recent statements – in charge of the EPA.

We recently saw an executive order to allow dumping of coal mining waste into streams, reversing an Obama order to the contrary. Supporters argue that this is not a new order, but simply a return to standards that were in place since 1983.

Ok, so we’re rolling that clock back to 1983, and we’re not so bad, because Reagan allowed it too?

This is all done for a few thousand coal mining jobs in the United States.

Great. We’re bringing jobs in coal mining and fracking back to the United States. China, Europe and even India are rapidly implementing renewable energy technologies. For instance, in Holland, all trains now run on wind energy. China just canceled 103 coal plants. China leads the world in implementation of solar energy.

Chinese children go to school 260 days a year. Americans 180. American children will be able to learn more about Noah’s ark when Betsy DeVos gets to implement her pet projects and bring “God to our schools.”

Climate change, we’re told, is responsible for heavy rains and drought alike. Whether temperatures are unseasonably low or high, global warming is the culprit. Snowstorms, hurricanes, and tornadoes have been around since the beginning of time, but now they want us to accept that all of it is the result of climate change.… Liberals have lost all credibility when it comes to climate science because their arguments have become so ridiculous and so obviously disconnected from reality.

Perdue is a former veterinarian and former governor of Georgia.

Make sure you give it a good read, and scroll down slowly, all the way to the bottom. This is a good visualization for those who argue that “the climate is always changing” like some of our illustrious members of Congress.

Mr. Trump and Mr. Pruitt, your viewpoints are opposed by 97% of the world’s scientist and a majority of the American public.

Human activities are largely responsible for climate change and severe impacts are already underway. The sooner we act, the lower the cost and risk will be.

You’ll go down in history as the administration that wrecked the planet – and the country.