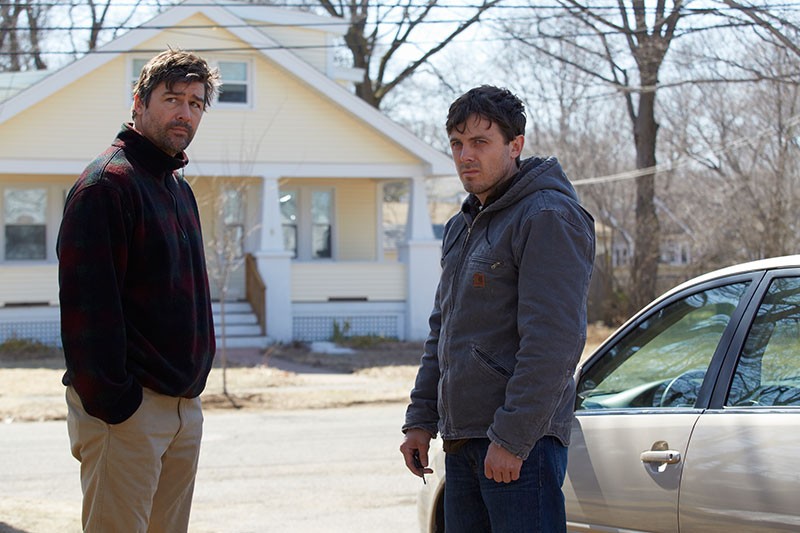 After this brother Joe’s sudden death, Lee Chandler (Casey Affleck) finds out that he has appointed him as sole guardian of his nephew Patrick (Lucas Hedges). Lee is a janitor in Quincy, south of Boston, about an hour and a half’s drive from Manchester, his home town. When he returns to take care of his brother’s funeral and will, the is thrown back into his former life, with all the vengeance and violence that former life can muster.

The movie tells the story of the Chandler family’s misfortunes in frequent flashbacks, and gradually we come to understand why Lee is so stoic and void of emotion in his pathetic life as a bachelor in a one-room basement apartment, unclogging other people’s drains.

His nephew Patrick is 16 years old, has two girlfriends at the same time, plays hockey, basketball and is part of a teenage band. His life is full, and Lee’s life has no room for him.

This film is rated with 97% on the Tomatometer, so I expected that it would blow me away. I found Affleck’s acting intense and as I walked out I thought he’d get an Oscar for it. But Trisha, who watched it with me, didn’t agree at all. She pointed out the he had one face throughout the entire movie, the one in the photograph above, and that set the mood. No Oscar. Thinking more about it, I must agree. His mood was as gray at the winter in Manchester, Massachusetts, and the entire movie was gray and drab.

But then again, that’s what Lee’s life was like after his brother died, and perhaps that’s the story. I’ll let you be the judge, since despite my low two and a half star rating, I recommend you watch it.