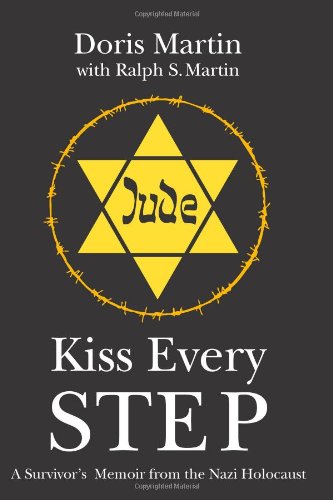 A few weeks ago, on a sunny Sunday afternoon, I walked into our local Barnes & Noble in Escondido for a little browsing. Near the door was a little old lady with a display easel and a stack of books. She looked up at me, held one of the books, and said “This is my book!”

It took me a few moments of talking with her before I realized that she was Doris Martin, and she pointed to herself on a photograph of prisoners in front of a cattle car in Auschwitz.

Doris Martin is 90 years old, and she spends her afternoons standing in the lobby of our book store telling her remarkable story of survival. I had the honor of buying a signed copy of her book, and talking with her for a few moments. She was 13 years old when World War II started.

It won’t be long now before all eye witnesses of this terrible time in the history of humanity will no longer be alive. I am grateful for every book they wrote, every story they told, and every tear they shed. Because those stories need to be told, as an everlasting lesson to those of us lucky enough to be born decades after the maelstrom of evil we now call the holocaust.

I find it despicable that there are actually people around today, called holocaust deniers, that claim the entire thing didn’t actually happen. It’s a spit in the face of every living Jew, it’s a trampling on the graves of every one of the 12 million Jews that were slaughtered, and it’s a terrible insult to those who lived through this awful time and survived to tell the story.

Doris Martin is one of those. She spent three years in a labor camp in Ludwigsdorf as a young girl. The book tells the story of her parents and her siblings, a Jewish family lucky enough to have all members survive the war and reunite afterwards. The odds must have been one in a million. Perhaps they were the only ones.

Kiss Every Step is a book everyone should read. It illustrates what happens when a minority, in this case a religious one, gets ostracized and cast out of society, initially through subtle regulation, soon through brutal discrimination and racism, and finally by outright, open, unfettered, blatant murder.

Unfortunately, and frighteningly, traces of this are happening right here, right now, in 2016 in the United States of America. Watch out!

Link to the official website of Kiss Every Step

Other posts related to the holocaust in this blog:

Book Review: The Rise and Fall of the Third Reich – by William Shirer

Book Review: All the Light We Cannot See – by Anthony Doerr