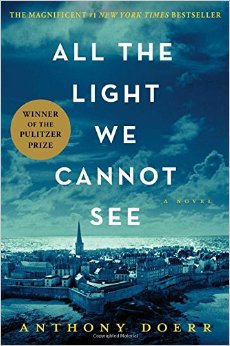 In Paris before World War II, Marie-Laure is a blind French girl. Her father is a locksmith at a Natural History Museum in Paris. He dotes on her, teaches her to be self-sufficient and buys her hugely expensive Braille books of Jules Verne.

Werner and his younger sister Jutta are German orphan children, living in an orphanage in the Ruhr area of Germany, the industrial and coal mining district of the country. Werner is brilliant with electronics and technology. When the Nazis rise, they notice him and he gets a scholarship for one of the best schools in the country. The Reich invests in its youth.

These two protagonists grow up separately before and during the war, and through a series of plot twists, their paths cross in 1944, just as the Allies land in Normandy and start taking France back.

Hitler’s “Thousand Year Reich” lasted a total of twelve years. He is single-handedly responsible for tens of millions of deaths in Europe, and for turning Germany and the surrounding countries into wastelands of destruction. Hundreds of millions of people’s lives were turned upside down and very often destroyed as a result of the war. Marie-Laure and Werner are common people caught up in the maelstrom of destruction.

Through their stories we see the pain those times inflicted on the people. After the war was over, we follow a few of their friends and relatives all they way to today’s time, and we witness the scars.

My own parents were born in 1935 and 1936 in Germany, children in the war. They could have been Marie-Laure and Werner. I am fortunate that both of them are still alive. When I talk to them today, and ask about their childhood, their eyes do not remain dry, and the pain and suffering is still trapped within them. Their lives never had a chance to unfold, and their entire adulthood, their middle age and their old age are characterized by coping with what was done to them when they were children.

All the Light we Cannot See tells a timeless story, with deep insight, of a brutal time, and a dark age in history. It’s unlike any World War II book, yet, it’s the World War II book that everyone should read.

2 thoughts on “Book Review: All the Light we Cannot See – by Anthony Doerr”