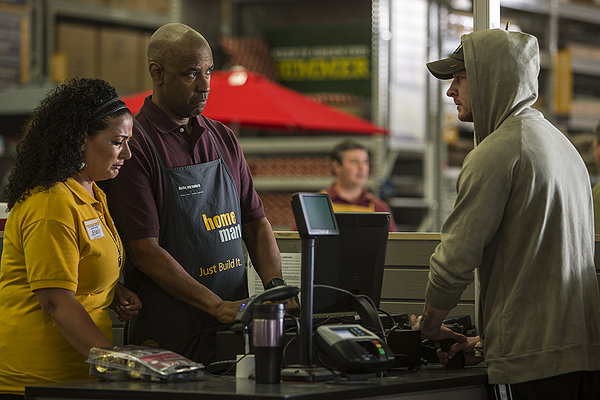 McCall (Denzel Washington) is a mysterious loner. He lives a quiet, simple life of a working man. He works at Home Mart (which looks exactly like a Home Depot), spends his free time reading classics and frequents a diner when he can’t sleep at night, which seems every night.

But occasionally skills show through that are far from the ordinary. McCall helps underdogs and he stands up against predators. In the picture above, the guy with the hoodie (did it have to be a hoodie?) is holding up a cashier at Home Mart and after he gets the money from the cash register, he asks for her diamond heirloom ring. McCall happens to witness the event, assesses the situation, and advises the cashier to give up the ring. Not long after, Hoodie finds out that this time he has messed with the wrong guy.

Teri (Chloë Grace Moretz) is a hapless prostitute that keeps showing up at the diner night after night. McCall doesn’t see the prostitute, but a helpless, lost and very young girl. When he finds out she is under the control of ruthless Russian gangsters, he takes his savings and decides to buy her freedom. With an envelope of cash, he walks alone and unarmed into the gangster den. When the Russians don’t take the offer, they also find out that they have messed with the wrong guy.

This starts an all-out war between one man (it’s like Rambo) and the entire Russian mafia, reaching from New York all the way to Moscow.

I don’t know too much about the Russian mafia, thank goodness, but the way it is portrayed in this movie scares me. It is organized in a military fashion, supported by the highest levels in Russia, utterly brutal, and with complete disregard for the rights we Americans take for granted. Seeing entire warehouses full of American cash on pallets ready to be shipped to Russia, money from drugs, prostitution, and extortion of all types illustrates the magnitude of the operations. I don’t know if this is really going on, but if it is – it’s staggering.

I happened to read the article Killer Business – An investor turned activist outfoxes the oligarchs in Russia in Time Magazine of March 2, 2015, page 100, just a few days after watching The Equalizer, and that article confirmed my assumptions.

Russia appears to be a completely corrupt nation, all the way to Putin, its president, who many assume to be the “richest man in the world” simply because the oligarchs all pay him off so he props up their criminal activities, at home in Russia, sucking the Russian people dry, and in the west, sponsoring the activities of the Russian mafia.

This is a topic for another post someday. Back to The Equalizer.

Highly entertaining, this is a Rambo-like movie with more subtle sentiment but plenty of action and violence, stacked with really bad villains and a flawless hero to root for.

And finally, I’ll never see a Home Depot in exactly the same way again. Now I see all the weapons.

One thought on “Movie Review: The Equalizer”