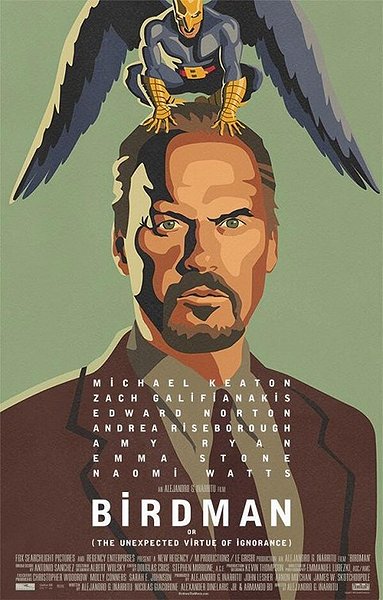 What does it mean when grab my iPad about 20 minutes into the movie, put it on pause, and pull up Wikipedia to figure out what it is I am watching?

It means the movie sucks.

We watched this today because it was nominated for and won so many awards. 93% on the Tomatometer doesn’t hurt, either.

But all the hoopla didn’t help me any. I just didn’t get it.

Birdman is a black comedy that tells the story of Riggan Thompson (Michael Keaton) a movie actor who was famous for portraying an iconic superhero, the Birdman. Now jaded and lost, he struggles to produce and direct a Broadway play, in which he also has a major role. He brings in Mike (Edward Norton), a brilliant yet volatile character actor. The struggle to make the play work almost destroys him. And yes, he has superpowers. He can telekineticly move objects and levitate himself. You go figure it out.

While the main characters did tremendous acting – thank goodness – the story, the premise and the plot were flat-out stupid. Why did he have superpowers? This added nothing to the plot and simply confused me. I kept waiting for when this would get good, but it simply never did, up to the last frame.

I would give this one star only, but the acting was just too good. So two stars it is.

Don’t waste your time and money.