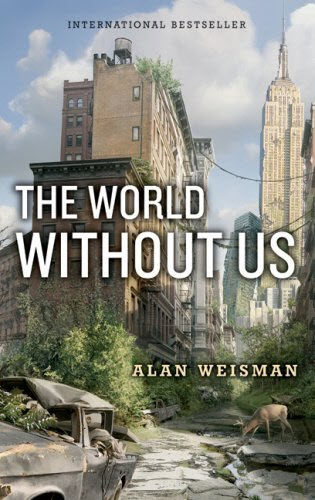 Imagine all the people in the world disappeared today. Gone. I recognize this is a hypothetical scenario, one that has a low likelihood of happening, but — it could happen. An Ebola-like plague could sweep the world and eradicate the human race in a matter of a few weeks. There have been doomsday books, like Stephen King’s The Stand that were based on just that premise. My favorite book about this subject is Earth Abides by George Stewart. Both novels start out with just about all people dead, and one single survivor eventually finding another one, starting the long process of building a new world from scratch and from the ruins of the old world.

The World Without Us is not a novel. It is a speculative work taking on many of the controversies of our society, including overpopulation, climate change and runaway pollution. Every chapter explores, from its own viewpoint, what it would be like if humans simply were no longer here.

Here is an example. What would happen in New York City if humans disappeared. Surprisingly, the city would come to pieces very quickly, must faster than other places out west.

Schuber peers down into a square pit beneath the Van Siclen Avenue station in Brooklyn, where each minute 650 gallons of natural groundwater gush from the bedrock. Gesturing over the roaring cascade, he indicates four submersible cast-iron pumps that take turns laboring against gravity to stay ahead. Such pumps run on electricity. When the power fails, things can get difficult very fast. Following the World Trade Center attack, an emergency pump train bearing a jumbo portable diesel generator pumped out 27 times the volume of Shea Stadium. Had the Hudson River actually burst through the PATH train tunnels that connect New York’s subways to New Jersey, as was greatly feared, the pump train— and possibly much of the city— would simply have been overwhelmed.

650 gallons of natural groundwater run into that one subway station every minute, and pumps must keep running 24 hours a day to keep it try. When the power runs out (and that’s another chapter), in a half hour the water would be high enough to flood the tracks and trains could no longer pass. In 36 hours the entire subways system would fill up. Weisman goes on:

Even if it weren’t raining, with subway pumps stilled, that would take no more than a couple of days, they estimate. At that point, water would start sluicing away soil under the pavement. Before long, streets start to crater. With no one unclogging sewers, some new watercourses form on the surface. Others appear suddenly as waterlogged subway ceilings collapse. Within 20 years, the water-soaked steel columns that support the street above the East Side’s 4, 5, and 6 trains corrode and buckle. As Lexington Avenue caves in, it becomes a river.

This is just about one of our great cities.

There are 441 operating nuclear power plants in the world. Without the regulating eye of humans, many of these plants would go through some form of catastrophic failure and eventual meltdown. Imagine 441 Chernobyls around the world. Check out this map and find how close you live to one? Hey Australia! Safest place on Earth in case of a meltdown.

This map is from 2005, I could not find a newer one, but given how long it takes to build such a plant, and considering that they are not building many more, it’s pretty close.

The World Without Us was published in 2007. Given today’s pace of development, and pollution in China (check out this link and be shocked), and runaway fossil-fuel-burning, things are much worse than described by Weisman in 2007, when there were only 6.5 billion people on the planet, rather than seven.

We’re adding one million people to the planet every four days.

The World Without Us reads like a fast-paced thriller, where the bad guys are out the make the world go away. As I read the book, I realized that I was in it, and it wasn’t a thriller, it wasn’t a novel, it was a giant reality show, and my life, and the life of my children, and their children, was on the line.

Don’t you understand what I’m tryin’ to say
Can’t you feel the fears I’m feelin’ today?
If the button is pushed, there’s no runnin’ away
There’ll be no one to save with the world in a grave
Take a look around you boy, it’s bound to scare you boy

Choose not to read this book at your own peril.