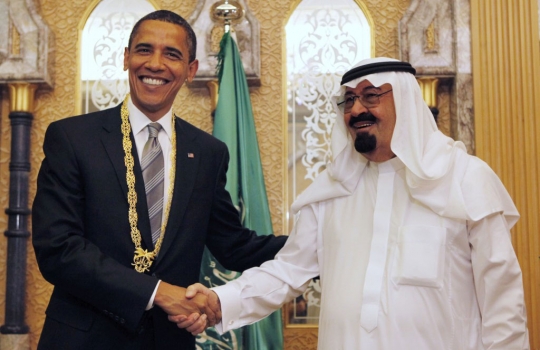 Senator John McCain called King Abdullah “a vocal advocate for peace, speaking out against violence in the Middle East”.

John Kerry called him “a brave partner in fighting violent extremism” and “a proponent of peace”.  He tweeted: “King Abdullah was a man of wisdom & vision. US has lost a friend & Kingdom of #SaudiArabia, Middle East, and world has lost a revered leader.”

Vice President Joe Biden announced that he would be personally leading a presidential delegation to offer condolences on his passing.

Why are our leaders fawning over an unelected leader of a country which publicly flogs dissidents, beheads people for political “crimes,” oppresses half of their population (females), funds terrorism, restricts free speech, and punishes atheists for not being Muslims?

Abdullah was a tyrant and abuser of his own people.

We should be despising him, not eulogizing him. What’s wrong with us?

One thought on “The King is Dead”