Remembrance – the English title, is probably the least descriptive.

This movie is about World War II, the Nazi concentration camps in Poland, what the war did to Poland and its people. It is also about undying love, and the moral obligations to life.

Based on the true story of Jerzy Bielecki and Cyla Cybulska, the German drama is directed by Anna Justice. It tells the story of Hannah Silberstein, German-Jewish woman from Berlin held in a concentration camp in Poland, who falls in love with a captured Polish resistance member named Tomasz Limanowski. 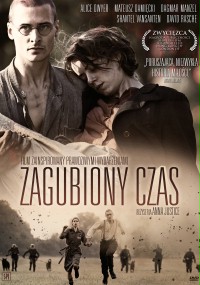 Tomasz orchestrates a daring escape for the two of them, and thus effectively saves her life – and his. But being free does not mean being safe. Poland is war-torn, and there is no safe place to hide. Quickly the couple is separated again, and eventually both come to believe the other to be dead.

In 1976, thirty years later, Hannah is married to an intellectual in New York City. They have a college aged daughter. By pure chance, she sees a television interview of Tomasz in Poland – he seems very alive indeed. Her old quest to find the love of her life is rekindled, and it brings turmoil over her family.

Germans know how to make movies that seem realistic. In Hollywood movies Germans would speak English with German accents. Here in Die Verlorene Zeit, we are treated to German when the Germans speak in the concentration camp, Polish when the Poles speak, and English, for the scenes that take place in New York. There are English subtitles for the Polish and German dialog. This approach to the language not only makes the scenes realistic, but it also puts the viewer into the middle of the action. What would it be like to be a Polish prisoner, donning a German uniform, pretending to be a German, but only knowing a few words, when your life – literally – depends on it? How does a German woman hide in Poland when she does not speak the language?

As is done by so many World War II movies, the terrible plight and suffering the Nazis put millions of Germans, Poles and Russians through boggles the mind. How could they inflict so much injustice on so many people for so long? How could they destroy so many lives – destroy by killing, then destroy by separating families, and lovers?

The injustice of war, the crime of atrocities, comes to vivid life in Remembrance. It reminds us of the depth of the human spirit, and the seeming inevitability of fate.