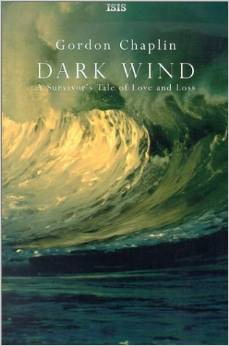 Dark Wind was first released in 1999, and I have a hardcover version. I was reading several sailing books at that time, since I had just completed a sailing course.

Gordon and Susan are avid sailors and they go on a long cruise, kind of a midlife thing, from Boston down to the Caribbean, through the Panama Canal, to Mexico, on to Hawaii and then the Marshall Islands. Eventually a typhoon hits and disaster strikes.

The entire story is a self-indulgent jumble of rationalizations, some story telling, journaling and general rambling. I am sure for Gordon Chaplin, his daughters, his friends and his family, this will have some meaning. For the rest of us, we really don’t care.

I learned a few things about sailing, like even though you may have sailed all your life, you might not be ready to cross the Pacific. There are maritime gods that might not favor you. There are dark winds out there.

This is overall a dark book. It conveys a sense of gloom from the beginning and that gloom never really goes away, until the end. The characters of Gordon and Susan don’t seem happy, even though he tells us they are living the best times of their lives. The words don’t match the feelings.