Check out this video and PLEASE tell me that this is a parody!

Then read down into the YouTube comments below (which I have often warned here never to do) and see how many people support these idiotic statement made in this video. Even if the person posting this video does it as a parody, these people commenting certainly don’t get it.

How can there be people in the United States, moving a mouse causing movement of cursor on a computer screen hosted by YouTube, sent to their house via satellite from some data center in Sweden, that do not believe the earth is a sphere? Do these same people use GPS in their cars?

Then there is our friend the dumbing-down-America in chief, Donald Trump. He is going to make America great again. Just trust him. He’s gonna do it. And he’s gonna build a wall, and Mexico is gonna pay for it. Because he’s a business man. He knows how to build great buildings.

And then tell me this video is a parody, so I can rest again. 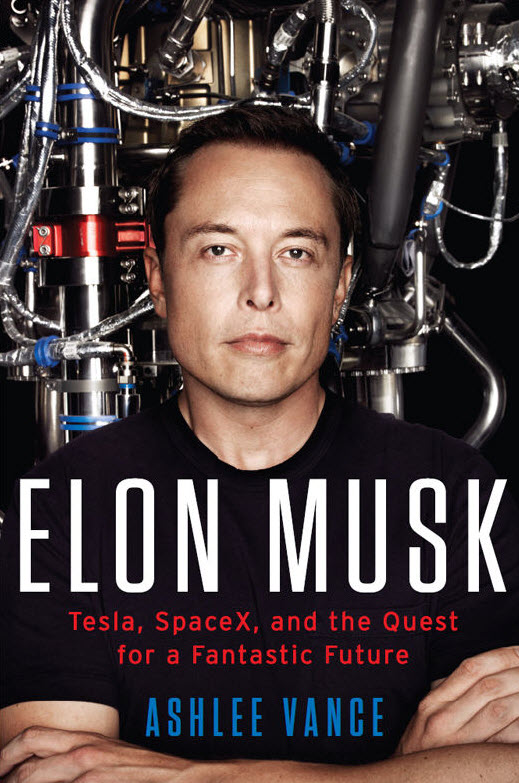 The subtitle for this book is Tesla, SpaceX, and the Quest for a Fantastic Future.

There are not many people in history that have created a billion-dollar company. The odds against are astronomical. Elon Musk has created several billion-dollar companies, and right now he is running two of them simultaneously. That is utterly astounding. What does it take to do that?

This biography describes who Musk is and how it came about that he was able to accomplish what he did. It starts with his childhood in South Africa, his rocky upbringing and unfortunate family circumstances. He landed in Canada with the proverbial few dollars in his pockets and started working hard, taking menial jobs and trying to be creative. And he made it big. He is now one of the icons of high-tech business in the world. And he has only just started. As I write this, he is only 44.

The biography of Elon Musk is required reading for anyone who wants to start a business.

I have started a business, and run one, and am still running one. Elon Musk started his first business after mine was already established, and he built Tesla and SpaceX long after I was already rolling along. There is a lot I can learn from him.

Reading this excellent biography by Ashlee Vance was a good start.

Today is a sad day for future space exploration. A supply mission of SpaceX to the International Space Station ended in catastrophic failure a little over two minutes after launch. The unmanned vehicle exploded. Here is a tweet from Musk, the CEO of SpaceX:

SpaceX was planning on starting manned missions by 2017. Whatever the failure was today, I suspect that the 2017 date will now be pushed out. I was rooting for the success of SpaceX. This is a major setback for them.

Here is the video of the event. The silence at the end is deafening:

During this morning’s browsing session of the blogs I follow, I came across this post from Self Aware Patterns, which led me to a brilliant article about the realities of space travel titled The Tyranny of the Rocket Equation by Don Pettit, a NASA astronaut and flight engineer. I say brilliant, because his writing is simple and succinct, and he explains complex engineering challenges in everyday language for the likes of me to understand.

If you are not into science and engineering, you won’t want to read the NASA article. However, I know that a good portion of my readers are engineering and science buffs. Every one of you will enjoy Pettit’s article – unless you are a rocket scientist yourself, in which case this is Rockets 101.

The majority of the human race will never know what it’s like to launch – and then land – in a space shuttle. Fourteen humans died trying it. No human from here on forth will ever again experience the space shuttle. It’s now a historic vehicle. But the trusty old Soyuz capsule still flies and is currently the only human rated spacecraft available to reach the International Space Station (ISS) and return from it. I got a kick out of Pettit’s one sentence description of what it’s like to land in a Soyuz capsule:

The Soyuz goes thump, roll, roll, roll; aptly described by one of my colleagues as a series of explosions followed by a car wreck.

Most of the article deals with the complexities and the physics involved in rocket science, and its practical limitations based on today’s technology. He compares the shuttle’s external tank with a soda can:

The common soda can, a marvel of mass production, is 94% soda and 6% can by mass. Compare that to the external tank for the Space Shuttle at 96% propellant and thus, 4% structure. The external tank, big enough inside to hold a barn dance, contains cryogenic fluids at 20 degrees above absolute zero (0 Kelvin), pressurized to 60 pounds per square inch, (for a tank this size, such pressure represents a huge amount of stored energy) and can withstand 3gs while pumping out propellant at 1.5 metric tons per second. The level of engineering knowledge behind such a device in our time is every bit as amazing and cutting-edge as the construction of the pyramids was for their time.

The stunning revelation is that the external tank has proportionally less material than a soda can, yet it flies into space. No wonder things did not go so well when the Challenger O-rings failed.

This article was first written in May 2012, before SpaceX made its major headline and surfaced as a viable player in the rocket world. I appreciate all the more the successes of SpaceX after reading The Tyranny of  the Rocket Equation.

I still remember clearly when I was 12 years old in July 20, 1969, watching the first moon landing on TV. I was in Germany then, so it was around 2:00am. I had special permission by my parents to stay up. Even as a 12-year-old I was aware that I was witnessing history, the first steps of man on another world. Over the next few years there were several more landings, and the photographs taken are now etched into our thinking of the 1960s. When Apollo 17 left the moon on December 14, 1972, I was not aware, and neither was anyone in the world at the time, that we had seen not just the first people on the moon, but the last ones, for a very, very long time. I am now 55, and I speculate that I may not see another human on another world in my lifetime.

In the 1940s science fiction writer Arthur C. Clarke forecast that man would reach the moon by 2000. He was 30 years off on the pessimistic side, but he too didn’t think that would be the end of it.

Neither did I expect that in 2012 the U.S. would be without the capability to launch humans into space and bring them back safely. Only the venerable Soyuz capsule, which first flew in 1966, is still available to carry U.S. and other nations’ astronauts to space and to the International Space Station. It is, after all, a Russian – Soviet era – space craft that is the most cost-effective and safest space vehicle ever designed. Today, the U.S. is paying Russia $450 million a year for the service of the Soyuz.

There is a push in the current administration to privatize space transportation. SpaceX is poised to make the first fully commercial flight to the International Space Station later this year. A lot hinges on its success. Of course, NASA never actually built spacecraft itself. Those were built by companies like Boeing and Lockheed Martin under “cost-plus” contracts. But NASA controlled all major aspects of the program. This is shifting. When SpaceX successfully reaches the International Space Station, it will be the first time an organization that is not a nation-state is making such a flight.

We expect now that it won’t be until 2020 that the U.S. will have capability to launch humans into orbit again.

I consider this situation a failure of vision by the last several U.S. administrations, including the current one. We have lost a critical edge of technology that we had held onto for a long time. We don’t show the will to succeed anymore, the will to win, and the will to excel as a nation, other than slapping around third-world countries in the middle east.

We seem to be fine focusing on controlling our deficits – and we’re terrible at producing results with even such prosaic visions and goals.