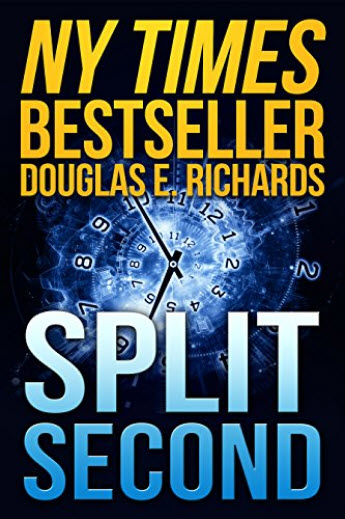 A brilliant physicist discovers that he can transport matter back in time, but only by 45.15 millionths of a second. That does not seem like a capability a that has any practical applications. However, as soon as the physicist sends an email to a close associate asking him to check his math, he and his girlfriend are abducted by a black operations team.

While that does seem like really bad news, it quickly gets worse, when the government team gets attacked on route by another force, which results in a gun battle that kills everyone but the girlfriend, who barely escapes. She hires a private detective to help her figure out what is going on.

What could possibly be so important that the government is literally willing to kill for it in cold blood?

Douglas E. Richards knows how to write page turners. His heroes are the most brilliant in their fields in the world. His villains are the most ruthless.

The concept of time travel in Split Second is based on leaving a copy of an object in the same space, while the earth moves to a different space in a given time interval. The earth rotates in 24 hours, which means that any point on its surface moves faster than a jet plane toward the east. The earth also circles around the sun in 365 days. The sun circles around the center of the galaxy once in about 250 million years. And our entire galaxy moves in yet another direction in space. Physicists have determined that this means that you and I move about 242 miles per second. This means that we, and any object, move about 58 feet in 45 microseconds. With the technology these guys invented, you can make a duplicate of any object and have it appear 58 feet away from where you copied it. It’s all very complicated and makes for a good story.

But somehow the author glossed over the minor point that the direction of the duplication always needs to trail the movement of the earth in the universe, which is in a constant direction. So as the earth rotates, this can be up, or down, or towards the west or east or anything in between. It can’t be controlled.

Yes, this is science fiction and you just have to accept that there is some magic tech involved. However, it bothered me that a book based on this much Einsteinian thought experimentation left this minor detail out of the equation. It kept getting in my way as I followed the plot.

Richards lives in San Diego, and so do I. This means that many of the locales he uses are very familiar to me and I can actually almost follow along, from Torrey Pines to San Ysidro, from Camp Pendleton to Orange County. Most importantly, I have spend a lot of time hiking and off-roading on Palomar Mountain, which is an important location in the plot of this story, and I therefore had very vivid and clear pictures in my head as I read the book.

I enjoyed Split Second enough to read it within a few days while traveling. I bought the second book in the series titled Time Frame since I was sure I’d want to know how the story continues. But after reading a few dozen pages into the sequel I quickly lost interest. I am sure it’s also a very fast-paced plot but I just wasn’t interested in reading more about this specific cast of characters and I decided not to read the next one after all.