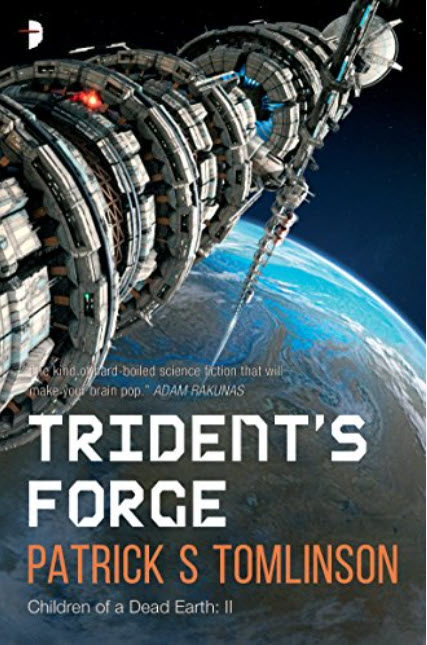 I wasn’t going to read the sequel, since the original book, a generation ship story, wasn’t all that exciting. However, the author roped me in with a few teaser chapters at the end of Book 1 and I read it anyway.

In Trident’s Forge, we meet the characters from The Ark again about three years after landing on the planet they call Gaia orbiting Tau Ceti. Mankind has gained a tenuous foothold. But on another continent on the planet, there is already a sentient race, they call them the Atlantians.

These aliens are slightly larger than humans, but humanoid with a head, two arms and legs, and very pliable, seemingly boneless bodies. It’s kind of strange that the author didn’t do a better job of describing how the aliens look. In my mind, they were simply big, gangly humans from the Bronze age.

Trident’s Forge is a First Contact story, albeit not one of the better ones I have read. The aliens are just like humans, with the same emotions, feelings, even reflexes. Other than looking a little different, and speaking a different language, they are just humans in costumes, and as a result, not very intriguing as aliens.

The story is another conspiracy story. Humanity has brought its worst attributes with them, including the greed of the elite class that will do anything to get rich and powerful at the expense of everyone else, including an entire sentient race. It’s a fast-moving story, quite readable, but unfortunately not very memorable.

I won’t be reading Book 3, even through I thumbed through the teaser chapters. There are too many other books on my reading shelf, and there is too little time left.