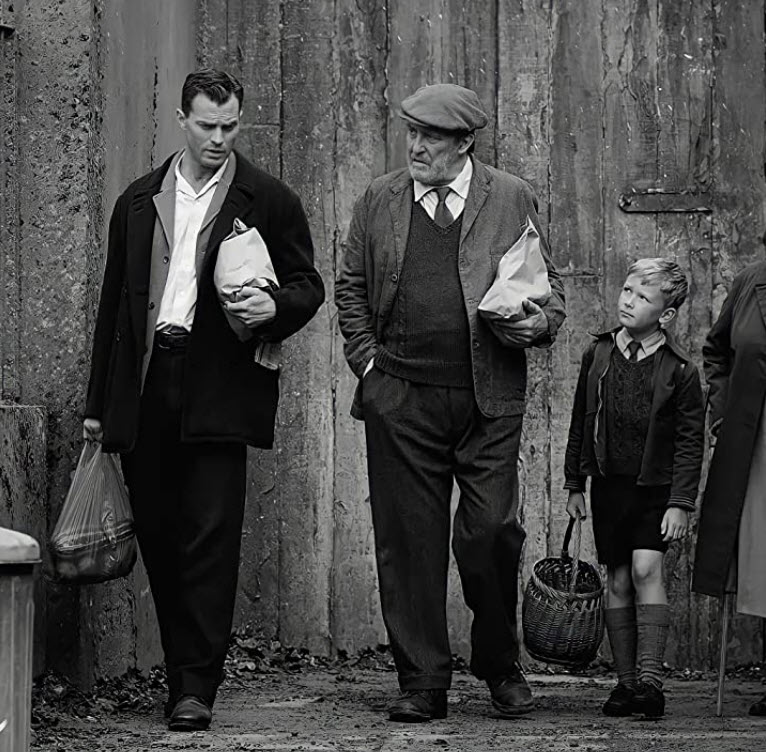 Belfast plays in 1969. Yes, those years when those of us old enough remember there were nightly headlines in the news about Catholics and Protestants killing each other in Northern Ireland.

Some Catholics and Protestants have been hating and killing each other in England for almost 500 years. When Henry VIII wanted to have his marriage to his wife, Catherine of Aragon, annulled, pope Clement VII refused to consent. This angered Henry VIII sufficiently to decide to separate the entire country of England from the Catholic Church.

Religious unrest has plagued the country ever since. Just read some of Ken Follett’s books to get firsthand accounts. A Place Called Freedom is one of those books.

Belfast is a semi-autobiographical account from the childhood of the director, Kenneth Branaugh.

Buddy is a 10-year-old boy from whose viewpoint the story is told. In the photograph above he is next to his grandfather and father, both caring men who do their best to keep their families happy and safe, but can’t overcome the epic battles taking place right outside their front doors.

The entire film is in black and white, except for explosions and when the characters watch movies or stage shows. Those are in color. This creates an odd mood.

The story starts slowly, almost boring, but it builds in intensity. While the subject matter is about extreme violence, there is no actual blood and gore shown. We just see people ransacking property, setting cars on fire and throwing firebombs, nobody is ever actually shown hurt. As we get to know the characters in this family, we get drawn in, and we can’t help but walk out in the end and call it a solid movie, a superb performance by the young boy Jude Hill as Buddy, and a film that will likely attract some Oscars this year.