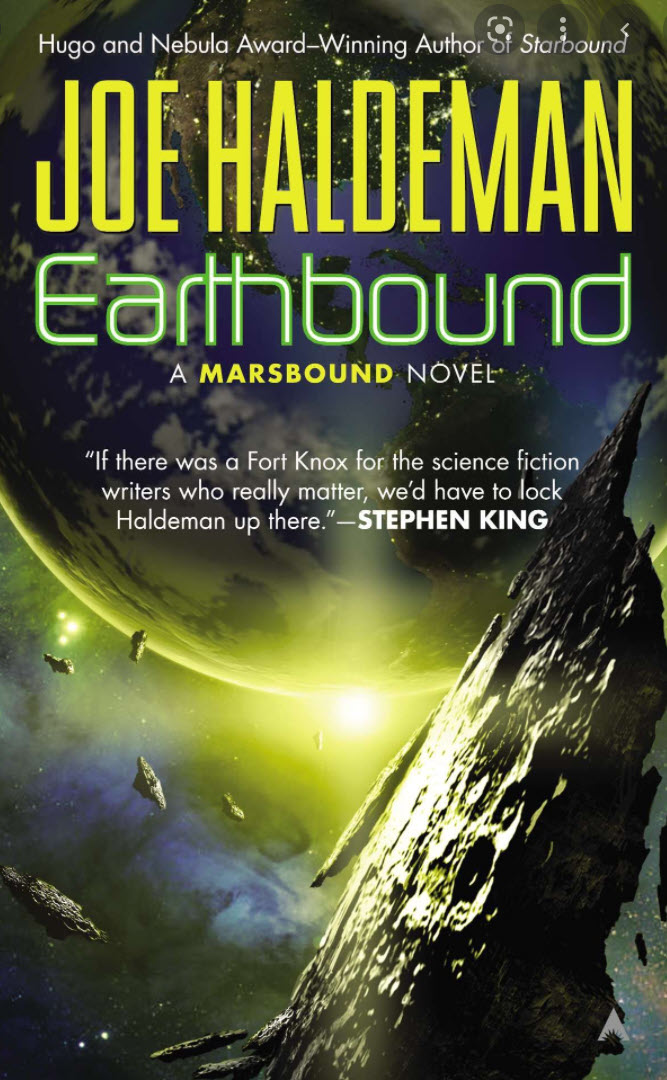 Earthbound is the third in Haldeman’s “bound” trilogy. The first two were Marsbound and Starbound, which I have recently reviewed. I gave them only two stars and one star respectively, and usually I would not read any more books of a series that I rated so poorly. But I made an exception with Earthbound, because I wanted to know what happened next.

In Marsbound, the protagonists traveled to Mars, found Martians, came back to earth orbit quarantine, discovered an alien race with seemingly godlike powers, and were attacked by these aliens.

In Starbound, a group of seven humans and two Martians were sent to the star of the aliens, 25 lightyears away, as ambassadors for the human race. They got there and came back, but not much happened otherwise.

In Earthbound, the group that came back from traveling to and from the alien star for more than 50 years, who had aged only a few years due the time distortion factor that applies at relativistic speeds, found itself stranded on a military base in California. The evil aliens had turned off everything electric in the world. It’s not explained how they did that, and it’s certainly not clear what alien reasoning has made them do that, other than they don’t like other races who can become dangerous by acquiring technology. So Earthbound is really not a science fiction story anymore, but an Armageddon tale of survival in a world that has been thrown back to the technology of the 1800s, however, with a supply of guns and ammunition available in the late 2100s.

Nothing much happened in Earthbound otherwise.