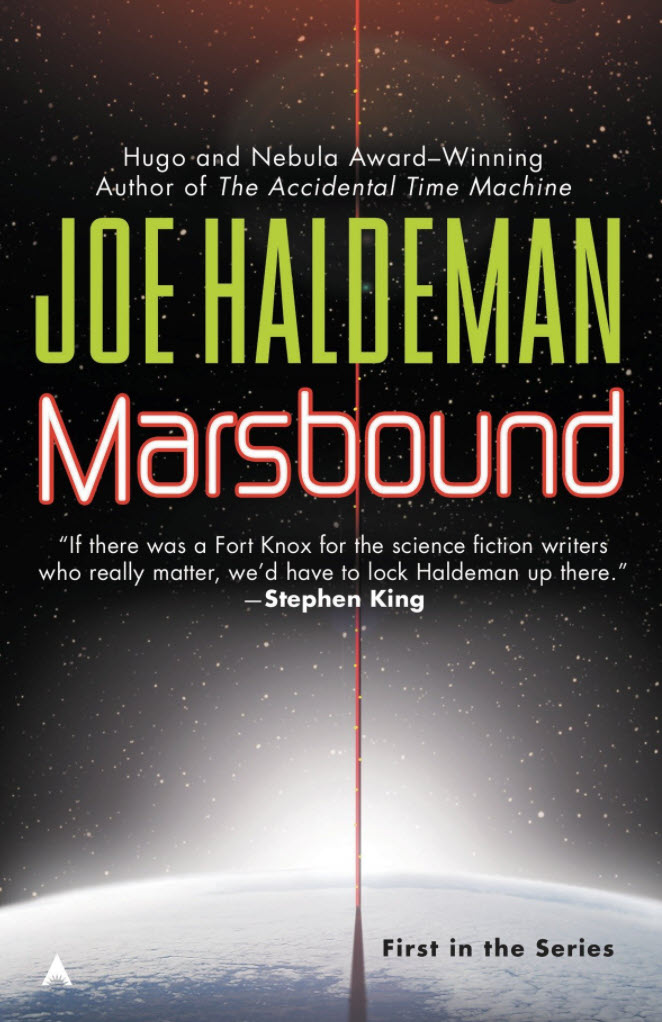 It’s late 21st century on Earth. There is now a space elevator in the Pacific off the Galapagos Islands that allows humans to reach space in a two-week elevator ride, rather than a 12-minute rocket blast. There is a Hilton hotel midway in the balance point of the elevator.

Carmen Dula is a 19-year-old girl traveling to Mars with her family as part of a group of scientist colonists, adding to the 100 or so people already living on Mars.

The story tells about the ride on the space elevator in great detail and much more elaborately than I have read in any other science fiction story. The reader will understand space elevators after this. Then it tells of the months long journey on a spaceship to Mars, the landing there, and the integration of the new colonists with the existing people there.

Carmen is not necessarily an obedient young woman. One night she defies all colony rules, as well as all common sense, and leaves the station in a spacesuit all alone, telling nobody where she went. Sure enough, she has an accident many kilometers away from the base, and believes she is about to die – when she gets rescued – by Martians.

At this point, the story took a completely different turn from what I expected, having read The Martian by Andy Weir recently. Weir stays with current technology in his book and does not venture into a speculative technological future. Haldeman stretches things here.

As it turns out, the Martians in this book are a race artificially created by “The Others” to keep an eye on humanity. Some 30,000 years ago, The Others visited the solar system, found early human hunter gatherers and decided that they could easily evolve into a space-traveling race. They put an outpost on Mars to monitor Earth, which took no effort at all for 30,000 years, until the humans started broadcasting in the early 20th century. Then they got busy and started learning human culture and languages simply from humanity’s broadcasts.

The Others are a highly advanced race which lives in a silicon-based environment embedded in liquid nitrogen. Their metabolism is more than a 100 times slower than that of humans, so there is no way for them to communicate with humans directly. However, they have created artificial sentinels that can translate between the thoughts of the others and humans.

The humans aren’t doing too well – being a bellicose race and never trusting others, and within just a few years of learning of The Others humanity does one stupid thing after another to stoke the ire of The Others.

Haldeman likes to tell near-future stories with space travel and relativistic concepts interwoven, and that makes for an interesting read, albeit a far-fetched one. With the story being told by an immature girl at least for the first half of the book, it feels a bit  juvenile at times, and there is a little bit more sex in the story than is necessary to make it succeed. Nonetheless, I enjoyed it and the concepts described, particularly the experience of the space elevator.