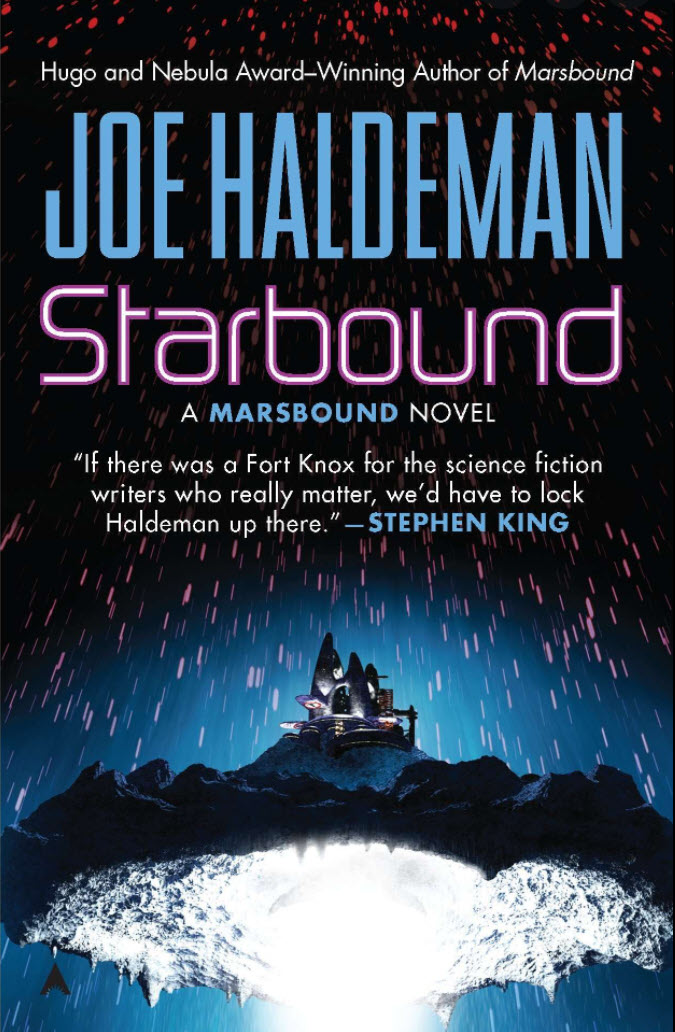 Starbound picks up where Marsbound stopped. Humanity has decided to send a starship to Wolf 25, the home world of The Others.

The starship uses the “free energy” concept provided by The Others through the Martians to create a matter – anti-matter reaction engine. However, for that it needs reaction mass, which it obtains from a large ice asteroid. The asteroid is large enough to provide mass to travel the 25 light years to Wolf 25 and back with mass to spare. The ship accelerates at 1g all the way to the half-way point, at which time it will have reached more than 90% of the speed of light, when it turns around and then decelerates for the second half of the trip. Due to the relativistic speed, the crew will only age 6 years during the more than 25-year journey.

They should be able to meet The Others, and come back, all over the course of a little more than 12 years in their own lives, while more than 50 years will have passed on Earth.

Along the way, unexpected events change their plans and the “meeting” with The Others is not quite what they expected.

While the premise is exciting, and the first journey of a crewed trip to another star could be exciting, the author does not take advantage of the opportunity. There are conceptual problems with the plot, and the story-telling is stilted.

There are some concepts that just don’t make sense. For instance, the ship accelerates at 1g for half the trip. However, anyone studying relativity and doing the pretty simple math will realize that, from Earth’s frame of reference, if you’re accelerating at a constant rate of 1g, then you would reach near the speed of light in about one year. Why keep accelerating after that, particularly when there is a significant plot point about the Martians really suffering in the 1g Earth-standard gravity. They could have turned the engine off after one year, and they would arrive only very marginally later, after turning the engine on for braking again one year out. The whole thing just didn’t add up.

Another massive plot hole is that the entire premise is that the limit of the speed of light affects all races, including The Others. They can’t travel any faster than anyone else. However, somehow they are able to cause terrible destruction to humanity seemingly instantaneously, as the plot of the story will tell.

Yes, you may say this is science fiction, and the author has to right to make up the technology. But this does not work if on one side the author goes to great lengths building a world around the limitations and effects of general relativity, but on the other hand seems to break those rules in deus ex machina fashion all throughout the plot.

Finally, let’s talk about the crew. Humanity sends seven humans and two Martians as the world’s ambassadors to another star to meet a known very hostile race. Leaving the two Martians alone, the human crew consists of two married couples. The first are Carmen Dula and Paul Collier of Marsbound. The other are Meryl and Moonboy, the two xenologists of Marsbound. Then apparently to make things interesting, they add a triad (marriage of three) with two male “spies” and their mutual wife, Elza, who is a medical doctor who also happens to be a nymphomaniac. This causes all sorts of friction as she sleeps her way through the crew within the first few weeks. Why in the world would humanity set up a team of star travelers who would be cooped up in a spaceship tin-can for 12 years and not make sure there will be sexual stability for the journey? I assume it’s for plot purposes, so there is plenty of sex sprinkled into the story. I might add that the sex really does not work in this story.

The author also applies a strange concept of using three different narrators, switching between chapters. One is Carmen, the other in Namir, one of the spies, and the third is Fly-in-Amber, one of the Martians. I don’t see why that was necessary, as it didn’t add anything to the story as far as I could tell. But it was confusing, since I had to figure out who was talking every time a new chapter started with the protagonist speaking in the first person. He could have put the name of the narrator into the chapter title and made it a little more straightforward.

Starbound is a tale with a lot of possibilities, but those are completely wasted. Haldeman is a good story teller, and I enjoy his novels, but this one is just too poorly crafted and constructed, with a far-fetched a plot that I simply was not able to buy into.