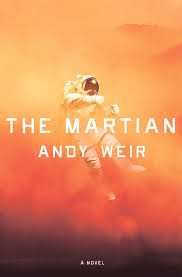 I went on a business trip to Seattle with several colleagues. At the airport in San Diego, one of them mentioned he had just finished a book he really liked: The Martian – by Andy Weir. It was about an astronaut stranded on Mars by himself, and his fight to survive.

I downloaded the book before I boarded the plane and started reading it on the way. I was in Washington for 3 nights. During the days I worked, and at night I read the book. I finished it on the plane back. I could not put this book down.

Mark Watney is one of a crew of six astronauts on a mission to Mars. They are planning on staying for a month. On the sixth day on the planet, a severe storm hits and they are forced to abort the mission and leave in an emergency takeoff. On the way to the ship, Mark gets injured by a flying antenna that punctures his space suit. The bio computer indicates flatlines. His crew mates think him dead and leave in a hurry because they are worried that the ship will be toppled.

But Mark is not dead. When he comes to and assesses the situation, he realizes that nobody knows he is alive, he has no way of communicating with Earth, the next mission to Mars, to a completely different location, is not scheduled for several years, even a rescue mission would take a year to reach him, if there could be one, and the habitat has food and supplies for six people for one month, or enough for one person for six months – not enough for him to survive.

But Mark is an astronaut, and he is resourceful. In MacGyver style he removes the antenna that has impaled him, and he realizes that he was lucky not to be injured seriously. Then he gets to work on a plan of survival.

The story switches between Mark’s log files as he tells the story, and the NASA team that tries to rescue him, as well as his crew mates on their way home. The action never stops.

This is an extremely technical novel. If you love stories about space travel, NASA, exploration and human ingenuity under extreme conditions, like I do, this is an amazingly entertaining and riveting story. If you don’t have an interest in learning what happens when a human breathes in oxygen and exhales carbon dioxide in a closed environment, then this might be over your head and possibly even boring.

For the techies among us, this is an absolute must read. As I said, I could not put this book down.

I learned that there is a movie on the way – with Matt Damon playing Mark Watney. I can’t wait.