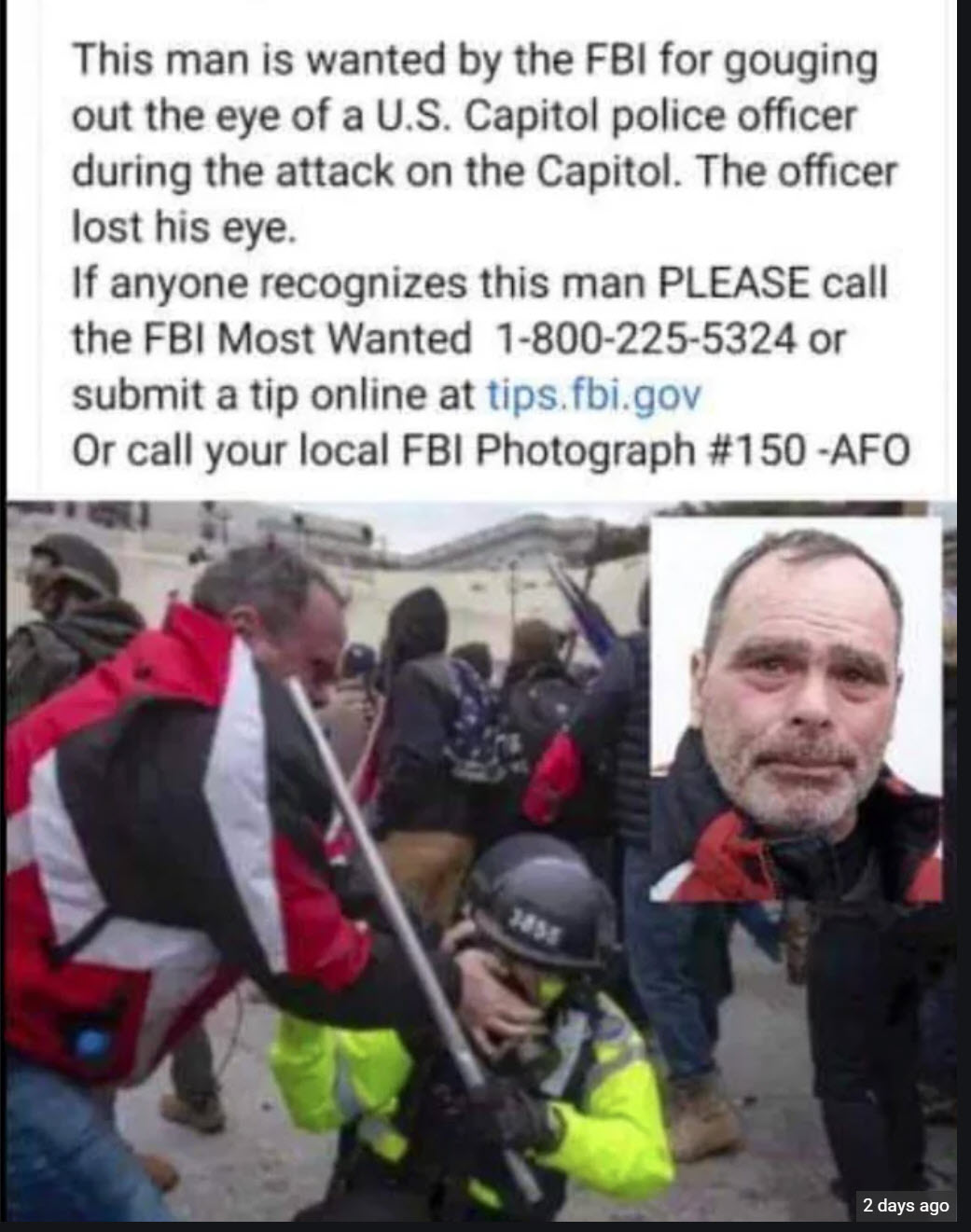 The FBI is looking for the Capitol Rioters. Here is an article in HuffPost with many pictures of wanted criminals.

The man in the picture above gained notoriety as the eye gouger. Here is a picture of him trying to gouge out the eye of a capitol police officer. In the first version of this post, I had stated that this officer only had one eye left for the rest of his life. A helpful reader has since corrected me and stated that the gouger was unsuccessful, and the officer has since fully recovered.

I am a martial artist. In my training, many years ago, I have learned a lot of gruesome techniques of self defense, and I believe if I were trapped in a threatening situation I would have a lot of “weapons” at my disposal that could do serious damage to an attacker. In my entire life, I have never been in a situation where I needed to draw on those skills. That’s because I always make choices that do not put me in such a situation in the first place. I have to say, however, that it has helped me greatly in my confidence walking down the street in a sketchy area from time to time.

One move at anyone’s disposal is eye gouging. You can do it with one hand and one eye, like in the picture shown, or you could use a double-eye technique. I am not going to go into the details, but it’s definitely an effective self defense for anyone being attacked by someone of superior strength in very close quarters. One example would be a woman being raped.

Having this knowledge and training, and knowing such techniques is one thing. It’s another thing to use them frivolously. As a martial artist, the most important “skill” you learn is to respect others and never, ever purposely hurt them or attack them. As a matter of fact, even when using techniques for self defense, a martial artist will think about the appropriate response before counter-attacking. For instance, say you are a female, and your brother-in-law is drunk and tries to sexually assault you. You have choice to make. Do you want to kill him? Do you want to maim him for life? Do you want him to be hospitalized for a while? Or do you just want him off you so you can run away, and he can sleep off his drunken stupor and you can deal with the situation the next day without violence? These are four very distinct choices you have to make before you decide to counter-attack in a given situation.

I cannot imagine in what universe the man shown in the picture above lives, where he thought he had the right to attack a police officer and try to gouge out his eye, thus maiming him permanently, just because the police officer did his job and tried to interfere with the man’s attempt to invade the Capitol. The Gouger did this not because he was threatened or attacked.

He planned a trip to Washington. He went on an airplane. He traveled to a hotel and stayed the night. Then, on January 6, 2021, he went to a political rally and proceeded to do this deed. What else did he do that day? Who else did he severely injure before the day was over? He did this not protect his family, or himself, against some aggression.

He did it because he didn’t agree with the politics of the opposing political party.

In what world, in a civilized country, is it ok to gouge out another person’s eye because of political beliefs or ideological or religious convictions? The only world I can imagine is the same world where it was acceptable fly an airliner into a building and kill 3,000 innocent people. It’s terrorism, pure and simple.

The Gouger got away. He went back to the airport, flew home, and now sits at the kitchen table with his wife and children.

The FBI is looking for him. I hope somebody recognizes him and reports him. Somebody works with this man. He is somebody’s neighbor, or brother, or uncle. I hope he gets his day in court, where he can explain how it came about that he felt he had the right to try to gouge out the eye of a police officer at a “political rally.”

I wonder how he will explain this to his children.