Here is a post by Tim Boyd, the now former mayor of Colorado City, Texas, population 3,920 as of 2019. You can click on the image and enlarge it for better reading. 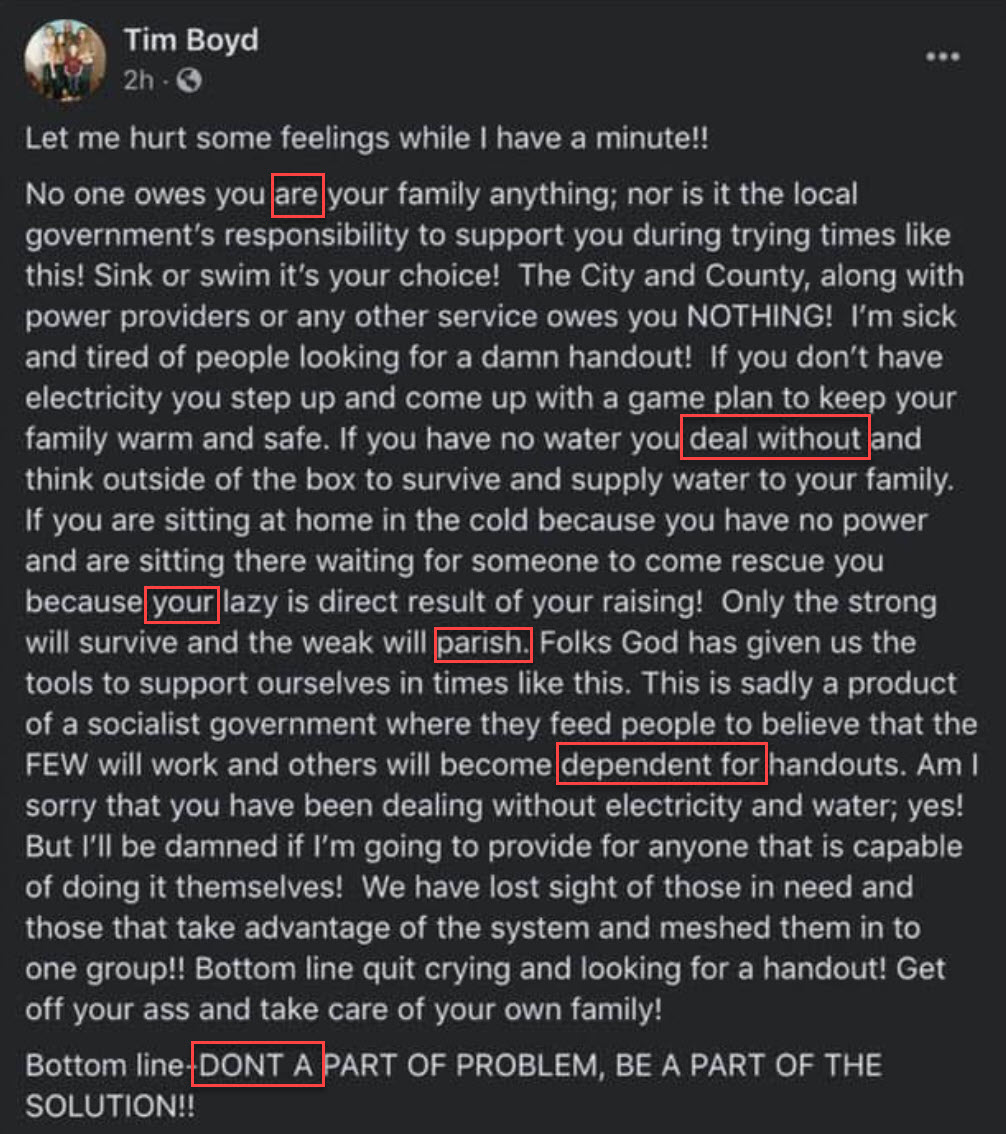 Before I get too far I should mention that the mayor resigned yesterday as a result of this post.

I put red boxes around obvious spelling or grammar errors. We all make spelling and grammar mistakes. I do too from time to time. But to have six of them in one post either means the mayor is not very educated, or he does not pay much attention to detail. The first can be excused. The second not. The mayor is addressing, or rather – assailing – his constituents, but he does not care enough to read his post one more time before hitting the Publish button.

It appears to me that the mayor fundamentally does not understand the role and responsibilities of a municipal government. He was elected to a position that has as its primary function and purpose providing for the safety, health and welfare of the citizens. That’s all we have municipal government for, that’s why it exists.

That’s why we pay taxes.

The mayor insults his constituents. He acts like we live in an agrarian society where we live off the land. In a municipal neighborhood, we do not have goats and cows in the backyard to supply milk, chickens for eggs, a well for water, and a rack of firewood. We do not have wood stoves to heat the house and boil water.

Instead, we have a contract with the water company to supply water, and another with the power company to get electricity, so we can leave our houses safe for our families while we go to work. We pay our electricity and water bills with the expectation that we continue to receive reliable services.

Calling citizens lazy when they are upset about the broken promises of the vendors and the government is an insult on top of injury.

I’ll be damned if I’m going to provide for anyone that is capable of doing it themselves!

So the mayor decides that some able-bodied citizens somehow magically go to the power company and turn the heat back on? The mayor decides who is elderly and can’t help themselves? He calls for people to stop being part of the problem, as if the people brought on the bitter cold in Texas. He calls for people to start taking care of their own families, without any practical suggestions as to how to do that.

Finally, he claims that the whole issue sadly is a product of a socialist government.

This is not 1880 in a Texas homestead. This is 2021 in a modern society where we rely on critical infrastructure to work.

What exactly is the mayor’s job then, if it’s not representing the community, and keeping people safe, healthy and protected?

Well, the mayor has resigned, and hopefully the people of Colorado City get a chance to elect somebody who at least has a rudimentary understanding of the responsibilities and duties of municipal government.

I wish them luck, and I hope that the cold breaks soon and they get relief.