Today I found this ad in my Facebook feed: 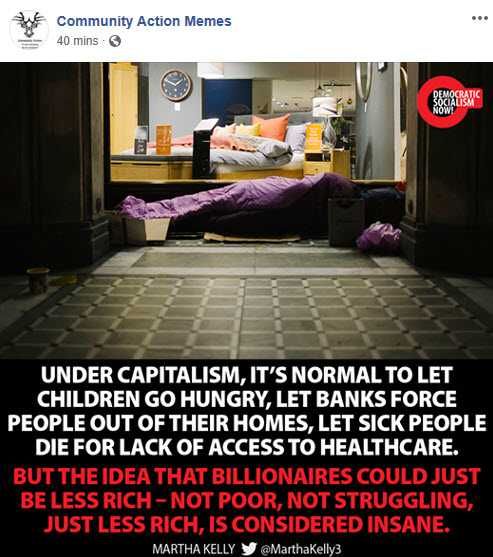 There are several current presidential hopeful front runners who routinely vilify billionaires, most notably Bernie Sanders and Elizabeth Warren. While I am generally aligned with most initiatives of the Democratic platform, I vehemently oppose this notion that “the billionaire class” is the root of our problems in America, and therefore we need to stick it to billionaires to “get even.” I really believe their type of economic extremism makes them unelectable.

This trend is not just American. Britain’s Shadow Chancellor John McDonnell during a protest stated that ““No one needs or deserves to have that much money, it is obscene,” during a protest of McDonald’s workers demanding higher wages.

In August of 2015 I wrote a post titled Musings about Vilifying Billionaires. This post is as valid today as it was when I first wrote it four years ago.

One of the best books about business I have read in a long time was Shoe Dog by Phil Knight, the founder of Nike. Here is my review from April 2018. Phil Knight is now number 16 on the Forbes 400 List with a net worth of $35.9 billion. Phil was a regular guy like you and I in the 1960s when he started selling shoes from the trunk of his car. The story of how he built Nike to what it is today is one of the most powerful stories ever told in business. If you have started and run your own business you will know how incredibly stressful and hard it is it make it work, succeed and survive.

Only somebody who has never had to make payroll, like a politician, will say something stupid like “nobody deserves to be a billionaire.” A statement like that exposes the speaker and is a testament to their ignorance and lack of understanding of basic economics.

Let’s go back to the meme above – Martha Kelly probably thinks it is the responsibility of the billionaires to feed the hungry, clothe the naked and cure the sick. And therefore, we should take the money away from the billionaires and let the government handle giving it to the poor. Yes – good luck with that! The same people that make asinine statements like “nobody deserves to be a billionaire” are the ones whom we’re going to entrust the money they are going to take away from the rich to properly distribute to the poor.

Bill Gates has given away more than $28 billion to charity, and he and his wife have managed how the money is being used. I trust Bill Gates 100 times more that the money is used in the right way and for the right causes than I’d ever trust Bernie Sanders or Elizabeth Warren with the same money. Bill made the money, he knows its value, he understands how money works, and he has an intuitive knack for solving problems. Sanders and Warren do not have any of those skills, and neither do most bureaucrats in government.

When the self-appointed redistributors say they are going to take “a little away” from the rich, who decides who is rich and who is not? Where is the threshold? What’s to stop them from saying that if you make more than $80k in your family you are rich and you have to give your surplus to the poor? Who draws the lines?

I say we need to leave the capitalist system alone.

The workers at McDonald’s can ask about more wages all they want. If they are not contributing more for those more wages, they don’t “deserve” those wages.

If they are envious of the amount of money the CEO makes, why don’t they become the CEO? Problem solved. Oh, it’s hard? Ahh, there lies the rub.

If they want to be rich, why don’t they start a company, like a shoe company (Nike), or a software company (Google, Microsoft), or a rocket company (SpaceX), or a car company (Tesla) or an online retail company (Amazon), or a replacement of all taxis company (Uber), and they can be a billionaires. Hey, any of the people who built the companies I have listed here started from scratch.

Bill Gates was a college student who liked math.

Phil Knight was a jock who liked running and couldn’t find good shoes.

Sergey Brin and Larry Page were math students at Stanford.

Elon Musk came to Canada as a twenty-year-old with no money in his pocket. He shoveled out sewer tanks as one of this first jobs in America, before he started a car company and a rocket company in parallel.

Jeff Bezos started an online bookstore from scratch in 1994.

Read the biographies of these men and then come and tell me they don’t “deserve” to be rich!

The American system works. The tax system should be fair and even for all. But vilifying rich people because they were successful after defying all odds and worked their butts off all their lives does not work and will not get Sanders and Warren elected.

Now I have to get back to work. After all, it’s Sunday night and there is a lot yet to get done.

4 thoughts on “Democratic Socialism and the Vilification of Billionaires”