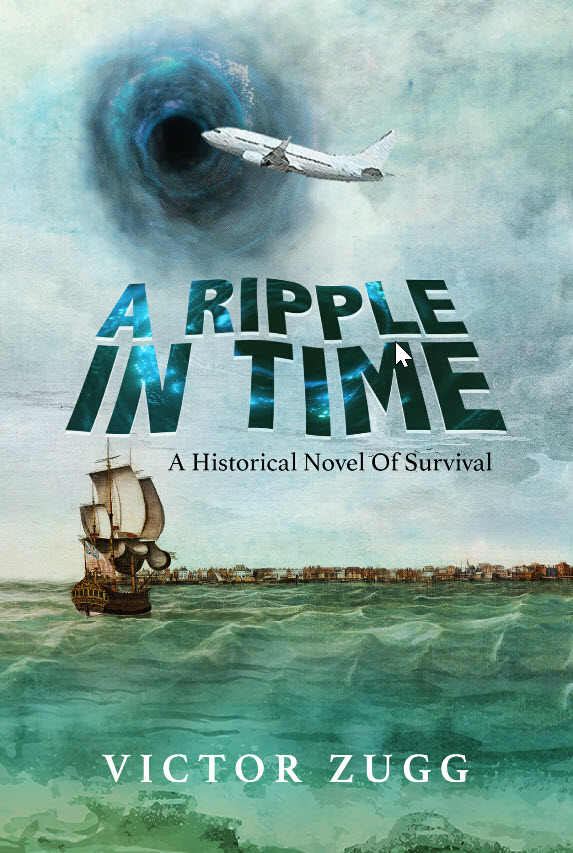 Steve Mason is a Federal Air Marshal on a flight down the eastern seaboard of the United States, to Charlotte, North Carolina.  After a mostly uneventful flight, the plane suddenly hits a dark cloud unexpectedly. Turbulence ensues, strange blue flashes are outside the windows, and just as abruptly as the cloud appeared it stops and the plane enters blue sky again.

However, all communications with the outside world have ceased. The crew looks out the window and recognize the familiar landmarks of the North Carolina coast, but all the cities are gone. After a frantic but unsuccessful search for an airfield to land, the pilots know they will run out of fuel and decide to ditch the plane into the ocean off the coast of what used to be Myrtle Beach, South Carolina.

The landing is not as successful as that pulled off by Captain Sullenberger who landed a plane in the Hudson River in 2009.  The plane crashes hard, breaks up, and out of the 180 passenger and crew, only less than 30 people survive.

Eventually, the survivors realize they landed in colonial America in 1720. There are only four cities of any size in the colonies at that time, Boston, New York, Philadelphia and Charles Town, which would eventually become Charleston. The survivors have to fend for themselves by fighting off marauding bands of Indians, criminal colonists, pirates, not to mention diseases, hunger, and lack of shelter.

The storytelling is stilted and juvenile. There is even a sex scene that is surprisingly explicit and somewhat inappropriate. What bothered me most is the multitude of grammatical errors that should have been caught by an editor. Here are a couple of examples:

Mason caught sight of the man whom had to be the captain. He wore a bright blue coat and a matching three-point hat with a feather.
— Zugg, Victor. A Ripple In Time: A Historical Novel Of Survival (p. 273). Kindle Edition.

“Whom had to be the captain?” That does not even sound right. There are other places in the book where the author misuses the word “whom.”
Here is another one:

He was surprised to learn there were several built prior to 1720 that still exited.
— Zugg, Victor. A Ripple In Time: A Historical Novel Of Survival (p. 294). Kindle Edition.

There are many such errors throughout the book. They are minor, and they don’t destroy the meaning. But they irritate me immensely. It makes me angry that the author is willing to have people pay money for a book that obviously NOBODY even bothered to proofread even once. I should not be finding basic grammar errors in a professional book.

So I didn’t plan on giving the book much of a rating. Yes, it’s a time travel story, and I love time travel stories. That’s the only reason I stuck with the book and continued reading, even though most of the action is fairly monotonous and slow.

But then, the ending is surprisingly good. I enjoyed the last 10% of the book tremendously and found the conclusion satisfying. For a change, here is a book that actually has an ending and is not just a cheap setup for a sequel or a series.

It was going to be 1 star, but the ending brings it up and – at least for me – made it an enjoyable read.

SPOILER ALERT – do not read beyond this point if you are going to read this book!

Some of my readers expressed curiosity about the ending, so I decided to summarize it here.

When they first landed at the beach they ran into a band of Indians. Mason he wanted to start out friendly and searched for a gift. He wore a steel bracelet with an inscription which read “Steve Brown, USA, 82nd Airborne, Operation Iraqi Freedom.” He gave this bracelet to one of the Indians as a gift.

During their ordeal, Mason became friends with the lead flight attendant named Karen. Eventually they had a relationship and there was one sex scene in the night on the deck of their boat.

Toward the end of the story, when the 20 survivors realized that they were probably marooned in 1720 for the rest of their lives, the group decided to buy a plantation outside of Charles Town with money they had obtained by accident from a pirate’s loot. When they needed to decide whose name would be put on the title for the property, they agreed that Lisa and Jeremy Jackson, who had also become close, would quickly get married and take title of the plantation. Upon purchase, the couple stayed in the plantation, and Karen stayed with them, while Mason and a few of the other men went back to the camp by boat to pick up the rest of them and bring them to the plantation.

Karen and Mason were in love by then, and when Mason left, he promised Karen he’d be back in a few days.

During that trip, however, the original pirate attacked them and eventually decimated their boat and everyone perished. Mason eventually was severely wounded and fell into the ocean. As he passed out, he saw blue flashes. Note: blue flashes are associated with the original travel through time in the first place.

Mason woke up in a hospital in 2019. The Coast Guard had fished him out of the ocean four days after the plane had disappeared and he was the only known survivor. Being a Federal Air Marshal, his colleagues debriefed him and he told them the truth. Nobody believed him, of course, and eventually even he himself assumed he had hallucinated the entire experience during the trauma of the crash.

But he missed Karen. Depressed, he went on a road trip to Charleston to see if he could recognize anything in the city. There was nothing left of the old Charles Town of 1720, other than the names of the main streets. On a whim, he entered a history museum. In a display box of Indian artifacts he found a rusted out bracelet, the inscription no longer readable, but unmistakably his bracelet. Now he knew he had really been there. He drove out to the plantation and met an old man by the name of Michael Mason who lived there. The old house had burned down in the Civil War and another one had been built, but it was the same plantation. There was an old painting on the wall that was the only item of value surviving from the pre-Civil War period. On the painting Mason saw Lisa and Karen, along with a little boy. Michael Mason explained that family history has it that Jeremy died from an infection a few years after they got married and they never had kids. But Karen had a son from an unknown father. The little boy was named Steve Mason. Lisa willed the plantation to the boy and he became the patriarch for the long line of Masons who would run the plantation through the centuries that followed.

Mason went home, outfitted himself with survival gear, a stash of antibiotics, and rented a Cessna. Then he spent the next three months flying around North Carolina every day looking for dark clouds with blue flashes. Eventually, in a storm, he found one – and disappeared. That’s the last thing we know of Mason.

After Mason’s disappearance, his friend Ted Wilson at the Air Marshal Service started to investigate. At Mason’s house, he found a shopping list of survival gear, the contract for the airplane, and the address of the plantation. He drove to the plantation, and a young man let him in and they talked about “his missing friend” who had left this address for some reason that neither understood. As Ted walked around the house, he saw a painting with two couples and one young boy. The young man explained that one of the couples was Lisa and Jeremy Jackson. When they never had children, they willed the plantation to Steve Mason, who was the son of Karen and Steve Mason, both also in the painting.

Obviously, Mason had made it back to Karen, his stash of antibiotics had saved Jeremy’s life, and they all grew old together at the plantation.

Ted walked away knowing the truth.

7 thoughts on “Book Review: A Ripple in Time – by Victor Zugg”