I was working today at the offices of the State of Ohio on the south side of the Columbus airport. One of the state workers asked me at 2:00pm when my plane was leaving. Around 5:30, I said. The office is literally about a 7-minute drive from the terminal, so I usually leave around 4:30 with plenty of time to make it through security before boarding.

She said I’d better leave quickly, since they’d close the roads out front. Trump was due to arrive at the airport at 3:30 for a fundraiser and dinner at 5:00 downtown Columbus.

One I arrived at the terminal, I got my first ever live view of Air Force One on the tarmac of the Columbus airport.

Off to the side was this other huge Air Force transport. 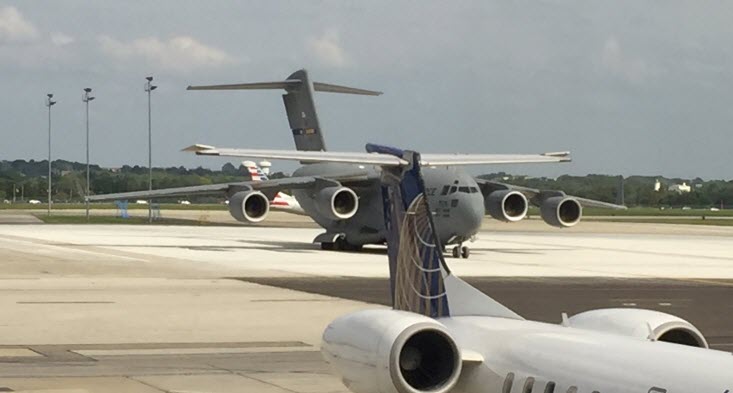 Sorry about the plane in the foreground. I could not get a better vantage point. When the president travels, an advance plane – sometimes two of them – brings his limousine or an entire motorcade. He has to have his own car.

We have the money to fly Trump from Washington to Columbus for dinner on Friday night for a few hours with two giant 4-engine planes.

But we don’t have the money to take care of homeless veterans.

When Bush and Obama were traveling, I didn’t mind so much. They too traveled with two or three planes everywhere they went. That’s nothing new.

But with Trump, I mind a lot.

One thought on “How we Spend Our Money – Trump’s Travels”