The founder of the Chobani yoghurt company is Hamdi Ulukaya, a Muslim immigrant from Turkey. He came to upstate New York 10 years ago with nothing, bought an empty Kraft plant using an SBA loan, and started hiring employees. Ulukaya is now a billionaire. He just made some headlines recently:

The clip below shows how he got started:

This man is not even a United States citizen yet, but he has created jobs for over 2,000 people in the United States already, and growing. Yes, he is a Muslim immigrant.

When the interviewer asks him about how Obamacare affects his business, she is obviously expecting complaints. However, he says “I have bigger problems. I need to make more yoghurt.” I have to agree. Most business people are way less worried about their employees’ healthcare costs than they are about running the business. If the business is run well and is successful, healthcare costs are a footnote at best.

So here is an amazing success story created by an immigrant. To my dismay, I then saw somebody commenting with this under the YouTube video: 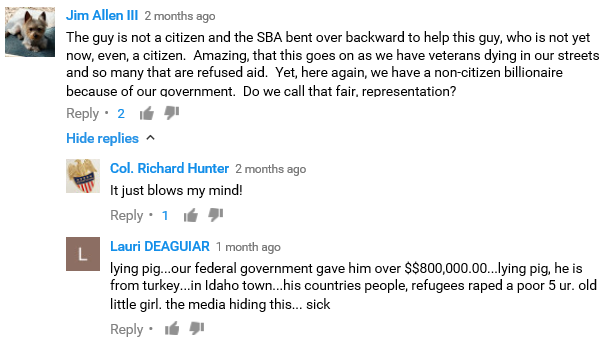 This kind of sentiment in our country makes me sick and embarrassed about my countrymen. Let’s just get this straight:

A guy comes from Turkey 10 years ago, a son of a farmer, penniless. He decides to start a yoghurt company. He goes to the SBA and borrows $800,000 and with that he rescues a factory in upstate New York that was being shut down by Kraft, and he proceeds to turn that $800,000 loan into a billion-dollar company, creates 2,000 jobs, then gives away 10% of his company to his employees, worth hundreds of thousands of dollars EACH, and Jim Allen III, Col. Richard Hunter and Lauri DEAGUIAR have a problem with that?

One complains about veterans dying in the streets. Why, if an immigrant farm boy from Turkey can start a yoghurt company and create American jobs, why don’t the veterans in the streets start some companies?

Another complains that he is a lying pig because, presumably there was a Turkish refugee in Idaho who raped a poor 5-year-old girl? I don’t get the connection. Sorry.

Here we have a self-made billionaire, who used the system, and borrowed $800,000 from the SBA, and built a great company. That’s Ulukaya. He is demonized by comments like this because he is an immigrant, and he is a Muslim.

I know of another self-made billionaire, who used the system (his words), and borrowed a small loan of $14,000,000 from his father, and built a great company. That’s Trump.

Both created thousands of jobs. Both are billionaires. Both “used the system.” One has never filed bankruptcy. Since he never had a billion-dollar loss, he presumably pays federal income tax.

But one is an immigrant, a Muslim and a not yet a citizen.

And the other is Donald Trump. He is running for president.

A tale of two billionaires.