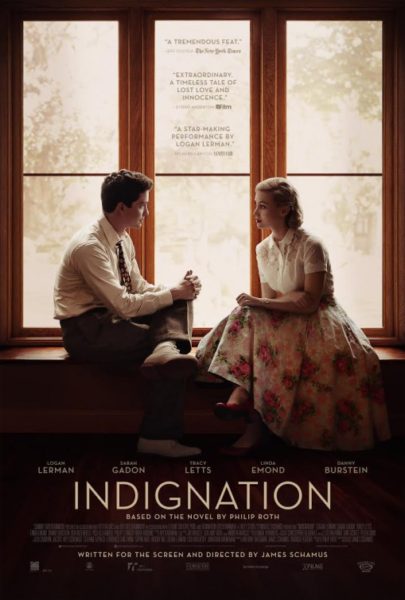 Marcus Messner (Logan Lerman) is a brilliant kid from a working class neighborhood in Newark, New Jersey in 1951. His family is Jewish. His father is a butcher and Marcus helps out in the shop during his senior year in high school.

It’s the time of the Korean War, the draft is on, and some of the sons of the neighborhood are coming back from the war in body bags. Indignation starts at the wake at the house of the Jewish parents of a fallen soldier.

Marcus has received a scholarship from a small town, conservative and mostly Christian college in Ohio, so he is exempt from the draft. As he finds his way in college, he becomes infatuated with classmate Olivia Hutton (Sarah Gadon), and things become complicated for him very quickly.

He is a kid who has his act together and he has a plan. He went off to college partly to get away from his overbearing parents. Nevertheless, through fate and circumstance, the trajectory Marcus had planned for himself does not quite play out as intended.

Indignation is a story based on the novel by Philip Roth. It portrays life of the working class in the early 1950s. It’s also a coming of age story of a young man.

We walked into this movie not knowing a thing about it, and we walked out both stunned about how good it was and how well crafted the story line turned out to be. Our conversation about the movie lasted all the way home in the car, and I have already ordered the sample of the novel on Kindle.

Go and see this movie!