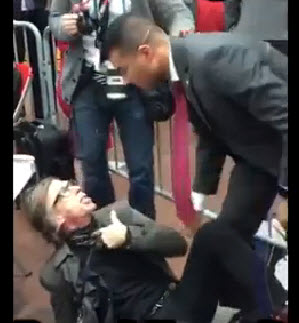 Today there were headlines again about Trump staffers (in suits) beating up a credentialed journalist. There are videos of that event all over Facebook. The picture on the left shows a clip of the journalist on the ground, as he is trying to fend off one of the attackers.

In the last few months, there have been many occasions where protesters were attacked by Trump security forces or even fans and supporters. The YouTube below shows “The Young Turks” excellent monologue and many short video clips of example after example of fans abusing protesters.

Trump even brags about it. “Maybe he should have been roughed up. What he was doing was disgusting!”

So the frontrunner for the Republican nomination, while he is still early in the primary campaign, already tramples on the First Amendment. He says that protesting against him at an event is disgusting, and this fans get violent. The message is, don’t exercise free speech at a Trump campaign event.

What do you think this man will do once he is president?

As disturbing as these pictures are, here is a lesson from history:

In Vienna, as we have seen, he was intrigued by what he called the “infamous spiritual and physical terror” which he thought was employed by the Social Democrats against their political opponents.* Now he turned it to good purpose in his own anti-Socialist party. At first ex-servicemen were assigned to the meetings to silence hecklers and, if necessary, toss them out. In the summer of 1920, soon after the party had added “National Socialist” to the name of the “German Workers’ Party” and became the National Socialist German Workers’ Party, or N.S.D.A.P., as it was now to be familiarly known, Hitler organized a bunch of roughneck war veterans into “strong-arm” squads, Ordnertruppe, under the command of Emil Maurice, an ex-convict and watchmaker. On October 5, 1921, after camouflaging themselves for a short time as the “Gymnastic and Sports Division” of the party to escape suppression by the Berlin government, they were officially named the Sturmabteilung, from which the name S.A. came. The storm troopers, outfitted in brown uniforms, were recruited largely from the freebooters of the free corps and placed under the command of Johann Ulrich Klintzich, an aide of the notorious Captain Ehrhardt, who had recently been released from imprisonment in connection with the murder of Erzberger.

These uniformed rowdies, not content to keep order at Nazi meetings, soon took to breaking up those of the other parties. Once in 1921 Hitler personally led his storm troopers in an attack on a meeting which was to be addressed by a Bavarian federalist by the name of Ballerstedt, who received a beating. For this Hitler was sentenced to three months in jail, one of which he served. This was his first experience in jail and he emerged from it somewhat of a martyr and more popular than ever. “It’s all right,” Hitler boasted to the police. “We got what we wanted. Ballerstedt did not speak.” As Hitler had told an audience some months before, “The National Socialist Movement will in the future ruthlessly prevent—if necessary by force—all meetings or lectures that are likely to distract the minds of our fellow countrymen.”

All the way back in 1921, twelve years before Hitler came to power, he recruited thugs, trained them into strong-arm squads, called them Sturmabteilung (storm division) – which later became known as the S.A., the precursor of the S.S. They were paramilitary groups who wore uniforms with brown shirts, and were basically Hitler’s private security force. They were all volunteers. At events, they intimidated protesters, and had no problem beating up the opposition. Sometimes they would arrive at the rallies of competing politicians and break them up violently.

95 years later, in 2016, this is what’s going on at Trump rallies. This is how fascism starts.

And it never ends well.

2 thoughts on “The Story of the Brown Shirts – Start of Fascism in the U.S.”