In December of 2012, right after the Icelandic volcano Eyjafjallajokull erupted, I published a post here commenting about people posting nonsense about volcanos and anthropogenic global warming. At the time I said:

The amount of misinformation spewed on the American public, driven by purposeful and targeted campaigns to dumb us down, is alarming.

This seems to be a pattern on Facebook, as I came across this picture in my feed on January 2. I have redacted the name of the poster and recipient, since those are not relevant to my argument. 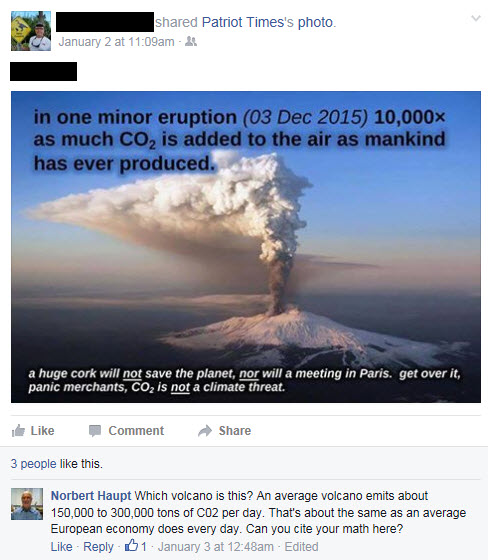 This poster obviously argued that “one minor eruption on Dec 3, 2015, pumped 10,000 times as much CO2 into the air as all of mankind has ever produced. He then insulted 97% of all climate scientists in the world by telling them to “get over it” and calling them “panic merchants.”

When I didn’t know what volcano he was talking about, I asked for more details. When the poster never responded, I did a 15 second Google search and realized he must have talked about the Mt. Etna eruption on December 3rd. There is plenty of documentation about that eruption, and another 30 seconds later I had the facts I needed.

Gas studies at volcanoes worldwide have helped volcanologists tally up a global volcanic CO2 budget in the same way that nations around the globe have cooperated to determine how much CO2 is released by human activity through the burning of fossil fuels. Our studies show that globally, volcanoes on land and under the sea release a total of about 200 million tonnes of CO2 annually.

200 million tons of CO2 seems like an extraordinary large amount. However, the United States Geological Survey (USGS) found that the estimated amount of CO2 generated annually by human activity is 135 times higher.

In addition, volcanos also spew out sulfur dioxide, which can lead to volcanic air pollution. Sulfur dioxide gas reacts chemically with sunlight, oxygen, dust particles, and water to form volcanic smog known as vog. This actually offsets some of the CO2 greenhouse effect by doing the opposite: Inducing cooling by injection of pollution into the atmosphere. So volcanos are often actually balanced out.

It is easy to post a picture like the above in a Facebook feed and let it trickle down to the uneducated and uncritical masses in order to advance an agenda. If that agenda is well-funded by powerful lobbies like the petroleum industry, it can make a significant difference in public opinion. It looks legit, doesn’t it?

Usually 30 seconds of googling provides the facts, though.