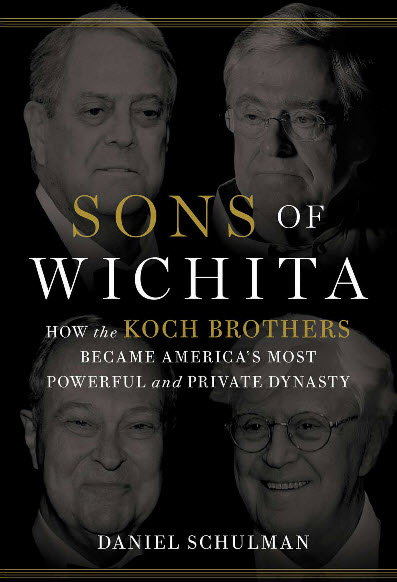 The “Koch Brothers” have been a household name in American politics over the past twenty years; since Obama, however, they have been vaulted into the spotlight. They are either revered or loathed, depending on the point of view. Sons of Wichita digs deep into the Koch family history and background, and leads us all the way to the present time. Their story starts in the earlier part of the 20th century, when Fred Koch, a young and ambitious engineer starts building a business in Wichita, Kansas.

The sad fact is that once people begin to get something for nothing then they want more and more at the same price. It destroys their independence, their self-reliance, and transforms them into dependent animal creatures without their knowing it. The end result is the human race as portrayed by Orwell— a human face ground into the earth by

Fred had four sons, not just two, as we commonly think of the “Two Koch Brothers”, David and Charles. There are also Frederick, who is the oldest, and Bill, David’s twin, who are known a “the Other Koch Brothers” in their own right and with their own legacies.

Some one-star reviewers on Amazon complain about how this is not a business book but a “soap opera” of American politics. I don’t agree at all. The author didn’t try to write a business book. It’s a biography of a remarkable family. Whether you like or dislike their politics, their characters or their deeds does not really matter. He tells the story like it was and is, and readers can make up their own minds and form their own opinions.

Fred Koch created a company out of nothing during a difficult time in America. The depression, the second World War and finally the post-war years. To make it possible, he was engaged in decades of stressful legal battles. Nevertheless, he built a company that was doing some $70 million dollars in business a year when he handed the reigns to his second-oldest son Charles, then a man in his early thirties. Charles turned that 70 million dollar business into a 90 billion dollar business, more than a thousand times as big.

Charles possessed an uncanny ability to sniff out profitable ventures, and when he occasionally mired the company in money-losing deals, he quickly cut his losses. The results of his leadership spoke for themselves. Between 1960 and 2006, the company’s revenues increased from $ 70 million to $ 90 billion. During that timeframe, an original investment of $ 1,000 in Koch Industries would have swelled to $ 2 million, a rate of growth that outperformed the S& P 500 by a factor of 16. This was not just dumb luck. Charles had a formula.

After reading the book, I have come away with several main thoughts myself:

While the book is not an easy read, I found it a page-turner nonetheless. It provides a fascinating view into one of America’s richest and enigmatic families.