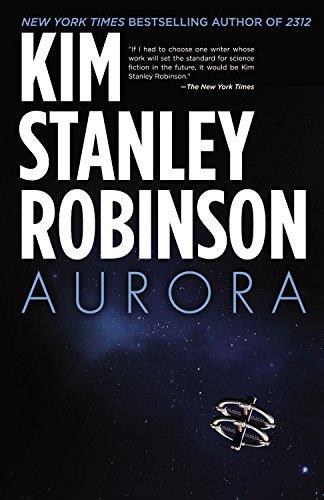 In the year 2545, a star ship leaves Earth with about 2000 people on board on a one-way trip to the star system Tau Ceti (which is interestingly a common destination in science fiction stories for interstellar travels). Tau Ceti is about 12 light years from Earth. The ship travels at about 10% of the speed of light. Figuring acceleration and deceleration, the trip takes about 170 years one way.

Putting this into perspective today, if we were on a ship arriving at the new star now, it would have left Earth sometime around twenty years before the American Civil War. The implications are mind-boggling, and Kim Stanley Robinson does an excellent job describing the society and the culture of the people onboard. He also describes the ship very explicitly and in far more detail than I have seen in many other generation ship stories.

The main story line actually begins about twenty years before scheduled arrival at Tau Ceti. It is mankind’s first excursion to another star system. The inhabitants of the ship do not know what to expect, but they know there is no possible return. The ship is a century and a half old, and things are breaking down. There are constant emergencies related to the ship and its life support systems. When they finally arrive, things don’t go exactly how it was planned, and how could they?

The author meticulously explores the social and moral implications of interstellar travel, and what it would do to the psyche of the travelers.

When the ship arrives, and things don’t go well, some of the crew wants to stay in the Tau Ceti system, and others want to return to Earth. This divides the book into almost two completely different halves. The story abandons those that stay at Tau Ceti. We never hear about them, and the story follows the returning crew. By using advanced cryogenics, they sleep through the trip, and the generation that left Tau Ceti arrives back at Earth about 200 years later, or around the year 2900. They have significant challenges decelerating at the solar system. The speculations about the speed of the ship as it enters the solar system at 3% of light speed are fascinating all by themselves.

After enormous challenges are overcome to decelerate, the travelers actually arrive on Earth. The last ten percent of the book then waxes philosophically about their readjustment, which I actually found quite boring and in retrospect completely unnecessary. The book could have been ten percent shorter and thus probably better. The Earth episodes could have been shortened to a few pages. So the last 10% of the book brought it down by about a star in my rating.

Regardless, Aurora is an education about generation ships, and therefore a must-read for anyone interested in the subject.

I am obviously interested. Other generation ship stories I have read and reviewed in this blog are listed here:

Orphans of the Sky – by Robert A. Heinlein

The Dark Beyond the Stars – by Frank M. Robinson

Seed of Light – by Edmund Cooper

I am sure there were more in earlier years, which I have forgotten about. If any reader remembers another generation ship novel, let me know, and I’ll read and review it here.