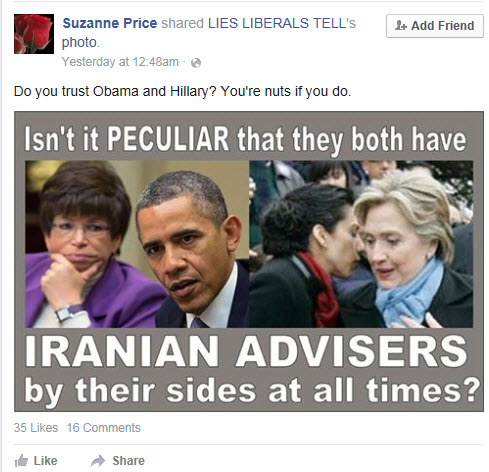 I don’t know the woman whispering into Ms. Clinton’s ear, but sitting behind President Obama is Valerie Jarrett. Here are her credentials [source Wikipedia]:

Jarrett was born in Shiraz, Iran, to American parents James E. Bowman and Barbara Taylor Bowman. One of her maternal great-grandfathers, Robert Robinson Taylor, was an architect who is sometimes cited as the first accredited African American architect.

Her father, a pathologist and geneticist ran a hospital for children in Shiraz in 1956, as part of a program where American physicians and agricultural experts sought to help developing countries’ health and farming efforts. When she was five years old, the family moved to London for a year, later moving to Chicago in 1963. Her parents were both African-American; on the television series Finding Your Roots, genealogical research and DNA testing indicated that Jarrett also has French, Scottish, and Native American ancestry. One of her great-grandfathers was Jewish. As a child, Jarrett spoke Persian and French. In 1966, her mother was one of four child advocates that created the Erikson Institute. The Institute was established to provide collective knowledge in child development for teachers and other professionals working with young children.

Jarrett graduated from Northfield Mount Hermon in 1974. She earned a B.A. in psychology from Stanford University in 1978 and a juris doctor (J.D.) from the University of Michigan Law School in 1981.

I am impressed with Ms. Jarrett’s background and career, regardless whether she was born in Shiraz, Iran.

For comparison, I tried to look up Ms. Price and found nothing but her own Facebook profile, according to which she is the Executive Assistant to the Chief of Staff, Director of Social Media at Stand Up America USA. Should I be impressed?

Bigot :  a person who is obstinately or intolerantly devoted to his or her own opinions and prejudices; especially :  one who regards or treats the members of a group (as a racial or ethnic group) with hatred and intolerance

Based on this definition, and her message above, Suzanne Price is a bigot and she is spreading bigoted messages on Facebook.

Who would I rather have advising the president? Ms. Jarrett or Ms. Price?