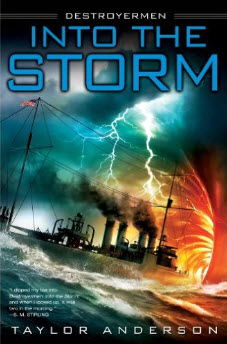 The USS Walker is a destroyer in WW II fighting against the vastly superior Japanese navy in the Pacific. Matt Reddy is its captain. After a fierce and almost lethal battle with a group of Japanese warships, the Walker steams into a squall for temporary protection from the enemy planes and ships. When the squall lifts, they are alone. The Japanese are mysteriously gone. It does not take long before they figure out they were somehow transported into a parallel universe.

They find themselves in a world where the dinosaurs were not wiped out. There are apparently two sentient races on earth. One are the reptilian Grik, raptor-like dinosaurs that are extremely bellicose and inherently evil. The other are descendants of lemurs from Madagascar, called the Lemurians. The Griks and the Lemurians have been at war with each other for millennia. When the USS Walker ventures upon a battle between the two, the humans find that their weapons are far superior to the bronze-age weapons, mostly consisting of swords, spears and crossbows. They appear to be in a position of great superiority, and they can shape the outcome of the war.

Now the race is on to find supplies (food, water, spare parts), ammunition (since theirs will not last forever) and fuel (a steam ship needs oil to run). Running out of those necessities would cause them to perish quickly.

Anderson has a good, clean engaging writing style. He characterizes well, and we get to know the main characters quickly and deeply. The dialog is engaging, and the story fast-paced. Into the Storm is the kind of book that’s hard to put down. Anderson’s alternate world is well-constructed and extremely detailed.

I picked up Into the Storm not realizing that is was the first book of a series. As I got to the end, I noticed that I was just set up to buy the next. Reviewing the series, I found there are six or seven books so far. The series reminded me of the S.M. Stirling series that started with Island in the Sea of Time, which also tells a tale of a ship thrown into an alternate history line, 3000 years in the past.

I like the story, I like the alternate history, I love Anderson’s writing style, and I want to read the next book. Alas, I won’t, not because Into the Storm isn’t a very entertaining book, but because I just don’t have the time and energy to read the next five or six books in the series. There are others on my reading list, and I just have to live without knowing how Captain Reddy and the Lemurians deal with the Grik threat.