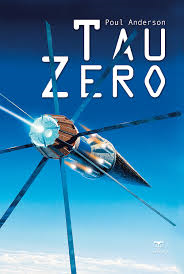 In the nearer future, about a century from now, humanity builds starships. The Leonora Christine is the seventh ship of its generation, and she getting ready to depart. The world selects 50 people, 25 males and 25 females, to travel to the third planet of Beta Virginis, which has previously been visited by a robotic probe and found highly likely to be habitable. Beta Virginis is about 50 light years away. To get there, at the speed of light, would take 50 years, if anything could travel that fast. To send a message back to Earth once they got there, would take another 50 years. So a hundred years later, the descendants of the star farers would first find out about the fate of the crew.

The Leonora Christine is a starship based on the Bussard ramjet concept. The ship scoops up interstellar molecules in a large magnetic funnel it pushes ahead of itself and converts this matter into energy for its reaction drive. Here is the description of the Leonora Christine in Chapter 2:

Her hull was a conoid, tapering toward the bow. Its burnished smoothness seemed ornamented rather than broken by the exterior fittings. These were locks and hatches; sensors for instruments; housings for the two boats that would make the planet-falls for which she herself was not designed; and the web of the Bussard drive, now folded flat. The base of the conoid was quite broad, since it contained the reaction mass among other things; but the length was too great for this to be particularly noticeable.

At the top of the dagger blade, a structure fanned out which you might have imagined to be the guard of a basket hilt. Its rim supported eight skeletal cylinders pointing aft. These were the thrust tubes, that acclerated the reaction mass backward when the ship moved at merely interplanetary speeds. The ‘basket’ enclosed their controls and power plant.

Beyond this, darker in hue, extended the haft of the dagger, ending finally in an intricate pommel. The latter was the Bussard engine; the rest was shielding against its radiation when it should be activated.

At an acceleration of 1g, the ship can accelerate to relativistic speeds (close to light speed) within about one year. Based on Einsteinean physics, onboard time slows down drastically as an object nears light speed. Decades go by on earth while the people on the ship may experience only a few months, or days, or minutes – depending on how close to light speed the vessel travels.

On the way to their destination the ship encounters an unexpected obstacle in form of a dense cloud of matter. As they hit it, some damage is done to the decelerator. In essence, the ship going effectively at light speed has lost its brakes. It can’t stop once it gets to its destination. They have to come up with an alternative plan.

The result is a cosmic journey where the ship travels through entire galaxies (which would take 100,000 years) while the passengers experience it as a mere turbulence lasting a few seconds, speed bumps in star travel. They end up going to the edge of the universe and time itself.

Tau Zero is a very hard science fiction story. Anderson spends time on his character development, but for the most part they are caricature-like and the human side story, while important, is secondary. The scientific concepts he illustrates blow the mind.

The technical concepts for the ramjet are described at Centauri Dreams for those of you that are interested. The Bussard ramjet is also described in this post Cruising the Infinite, among a number of other star travel technologies.

Conceptually, approaching light speed, the ship gets ever more massive, and time slows ever more down. So the trip between two galaxies that are 50 million light years apart could be perceived as taking a day on the ship – depending on how close to light speed the ship travels. The result, of course, is that from the viewpoint of the rest of the universe, the ship is traveling for 50 million years.

Anderson uses these relativistic concepts throughout Tau Zero. It is intense scientific reading. It needs to be read slowly, except for the human-interaction parts, which seem hokey in comparison. I skimmed over those.

One thought on “Book Review: Tau Zero – by Poul Anderson”