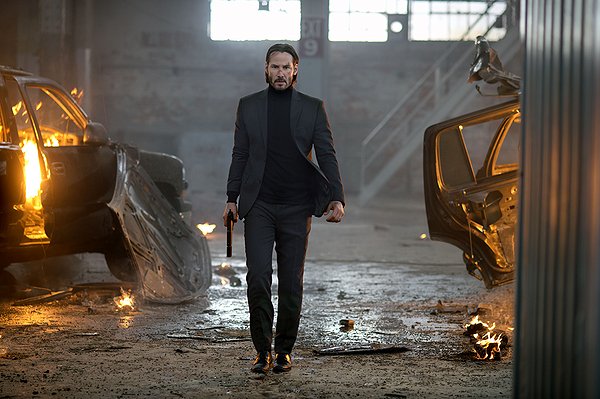 John Wick (Keanu Reeves) is an ex-hitman who lives a quiet life in New York City. He mourns the recent death of his wife. He gets hassled at a gas station by a young punk in a hoodie who acts like he wants to buy his car, but he gets away. But the punk persists and somehow figures out where John Wick lives and shows up at night in the house with a few other thugs, beating him, killing his dog and stealing his car.

It turns out the punk is the hapless son of a Russian mafia boss (what is it with me and Russian mafia movies these days – see here for The Equalizer, which tells a somewhat similar story). To make things worse, Daddy knows who John Wick is. He is visibly afraid of him and wants to work it out. But John doesn’t buy it. If you kill John Wick’s dog, a present from the beloved late wife, there will be no mercy.

John Wick starts a one-man war against the entire Russian mafia in New York City. This is reminiscent of McCall in The Equalizer or Rambo in First Blood.

The movie is one hour and 36 minutes long, but seems much longer. With minor interludes, it consists of John shooting Russians by the dozens, by the hundreds. At the beginning of the movie, hoodie overpowers and beats John in his house. But then John gets mad and overcomes 10 killers all at once in the same room, all movie long.

I don’t understand how this got 83% on the Tomatometer.

The movie seems like a video game where the main character just wanders around the city in all sorts of different locales and keeps shooting people in the head. Nobody seems to ever hit him. It goes on and on.

There is nothing else.