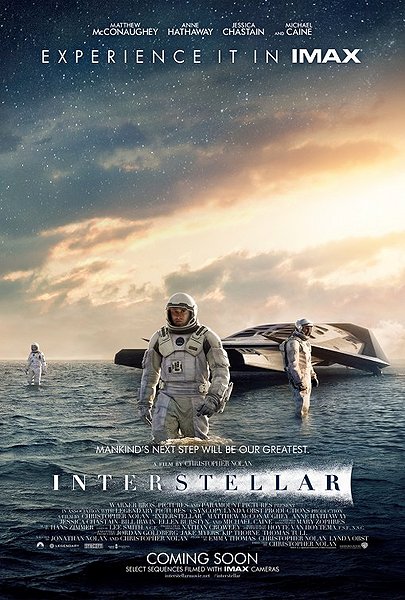 Cooper (Matthew McConaughey) is a reluctant farmer and former pilot and engineer somewhere in the Midwest, maybe Iowa. The Earth is breathing its last breaths and everyone knows that within another generation or two, it won’t be habitable anymore.

His precocious and science-minded 10-year-old daughter, Murph, thinks there is a ghost in her room and on her bookshelves. One day, during a dust storm, she detects binary patters in the sand that collected on the floor in her room. When they figure out the patterns are GPS coordinates, they get in the truck for a trip.

What they find at the end of that road trip is something neither of them could have possibly expected. It would soon changes both of their lives drastically.

It is my self-imposed policy not to write reviews that spoil the movie, and in this case, I find that a very difficult task. So I’ll stop right here talking about the plot or the story, but rather tell you what was in it for me – and what may not be in it for many other viewers.

Written and directed by Christopher Nolan, Interstellar is a huge science fiction epic with all the components that I love about science fiction. The problem with this film, if that actually is a problem, is that the viewer needs to have a solid background in a number of science fiction and science concepts to be able to understand the plot. The plot depends on those concepts. Viewers without that experience and knowledge would likely be lost and would not put the story together.

Be that as it may, for me, it was like Christmas of Science Fiction. It was all there.

Four and five dimensional spaces, tesseracts, and the phenomena a traveler along those dimensions might experience are central to the plot. A being that is able to travel in the fifth dimension, assuming time is the forth, can roll time back and forth at will. Some of that happens in this movie.

I loved the realistic feeling of the interstellar space ship Endurance. The ship is basically a wheel that rotates at a speed of 5.6 times a minute to create an approximately earth-like gravity for the crew.

At one point, there is an explosion on the ship and it starts spinning wildly out of control while nobody is on board. The crew is in a lander and their only chance of survival is to approach the spinning ship and match its rotation exactly, making the lander effectively spin like a top, while it slowly approaches the docking pad. I loved that scene. Matching velocities and rotations of independently spinning objects in space in one of my favorite space travel concepts. I can’t get enough of them.

Then there was time dilation. The Endurance had a crew of four. One stayed behind on the ship, while the other three went down to a planet in one of the landers. As it turns out, the planet was really close to a black hole, where gravity, time and space are sharply curved, causing the experience of time to change. One hour on the surface of the planet is equal to seven years on earth. If such a space traveler has any interest in coming home and seeing his family again, he can’t spend more than a few hours on that planet, lest they all be dead and gone. When they landed, things didn’t quite go right and they were delayed. When they eventually got back to the ship, their crew mate waiting for them for the few hours they were gone had aged 23 years.

There was Cooper Station, a huge generation ship, basically a spinning cylinder with human habitats inside of it, reminiscent of the Arthur C. Clarke’s Rama spacecraft.

There were a few hokey concepts too. For instance, the thought that we could ruin our own Earth in just a few decades from now so badly that an alien planet in another galaxy might be a better option seems very farfetched. But I could live with that.

I got a kick out of the ship’s robot, Interstellar‘s own version of R2D2, except really weird, too large and like a metal slab or a smart gravestone, that had me chuckle a few times.

And the music, the sound track, is superb: Hans Zimmer the greatest in the music business today. He gives another brilliant use of music to accentuate the drama.

Overall, watching Interstellar for me was just a lot of fun, one scene after the other. Science fiction came to life here, just like it should.

If you want to understand the various timelines, storylines, and general movie concepts, click on this link. It does an excellent job filling in the blanks if you watched the movie but didn’t get one thing or another.