Near the very top of Mt. Baldy in California, at over 10,000 feet elevation, rugged trees battle hard winds and blistering sun every day. In the winter, it’s bitter cold and icy. I took a photograph in the summer and made a painting, trying my hand at a loose brush.

It turned out so-so, but I am done with it.

Last week, on June 12, I did another hike of Mt. Baldy. I started from the parking lot in the valley’s campground, just below the ski area parking lot, and headed up. This time I didn’t go up the ski road, but rather took the very steep ascent. You can click on any of the pictures to enlarge them. 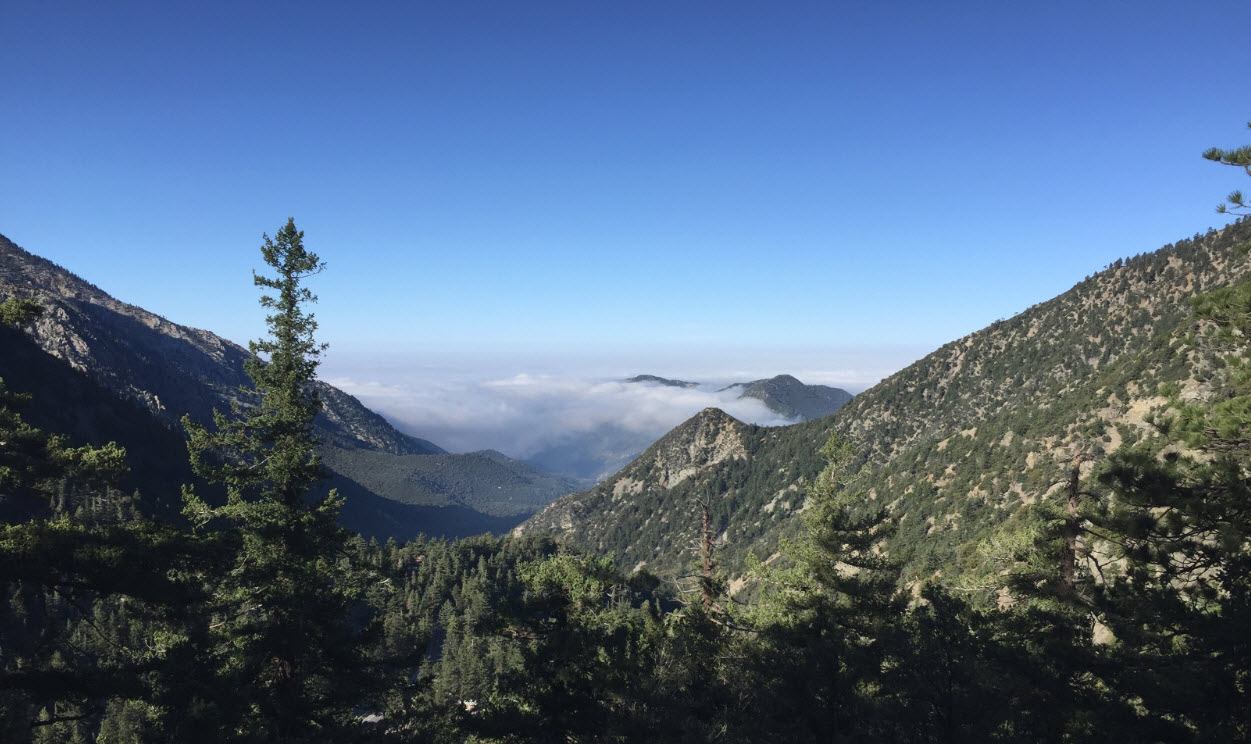 I took this picture shortly after the start. I am at about 6500 feet elevation, looking down into the Los Angeles valley. It’s cloudy down there, and it will remain cloudy all day. Not here. 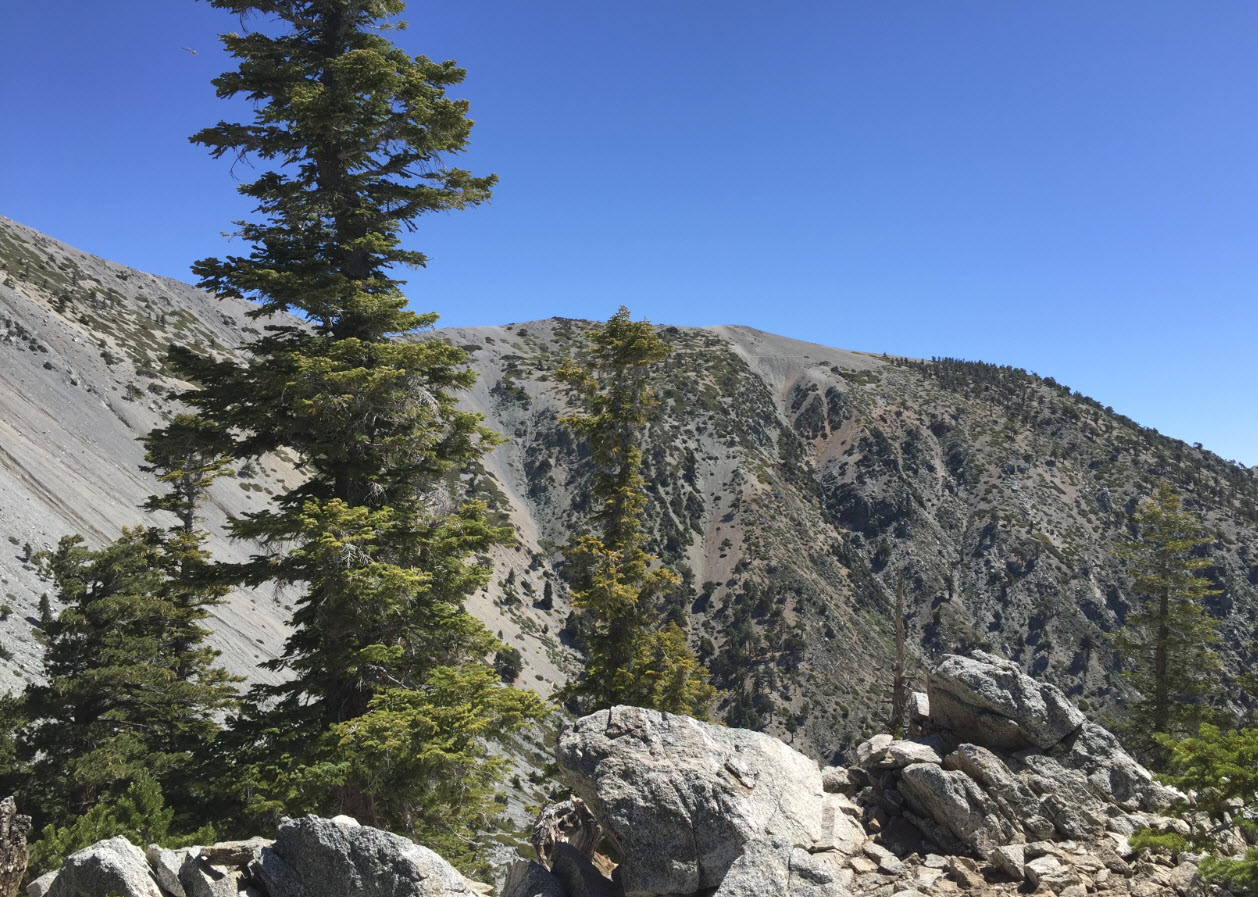 Here I am at about 8600 feet, looking across the valley to the ridge where I will climb down later. The peak is to the left of this picture, not visible. If you look carefully, you can see a slight path going horizontally across just below the very top in the center of the picture. I’ll point that path out again in a later picture from a different angle. 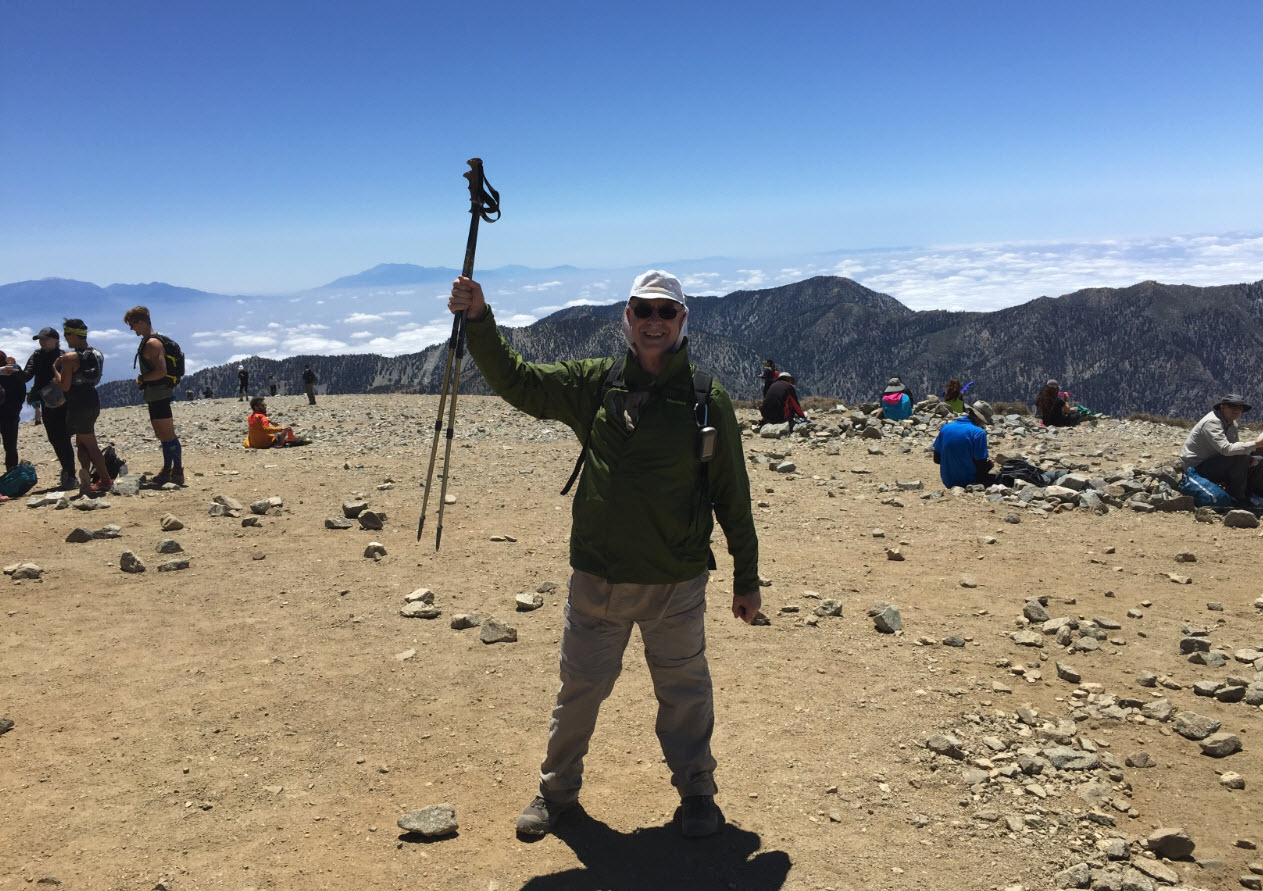 After 4.5 hours of steep uphill hiking, here I am at the peak at 10070 feet altitude. In the background, right by my hiking poles, you can see Mt. San Jacinto. To the very left is Mt. San Gorgonio, the highest peak in Southern California. Mt. Baldy’s peak is a huge expansive and broad, flat area, some of which you can see here behind me. There must have been 100 people at the top when I was  there. It was a very popular Sunday hike. The wind was blowing cold and strong. My fingers were freezing. 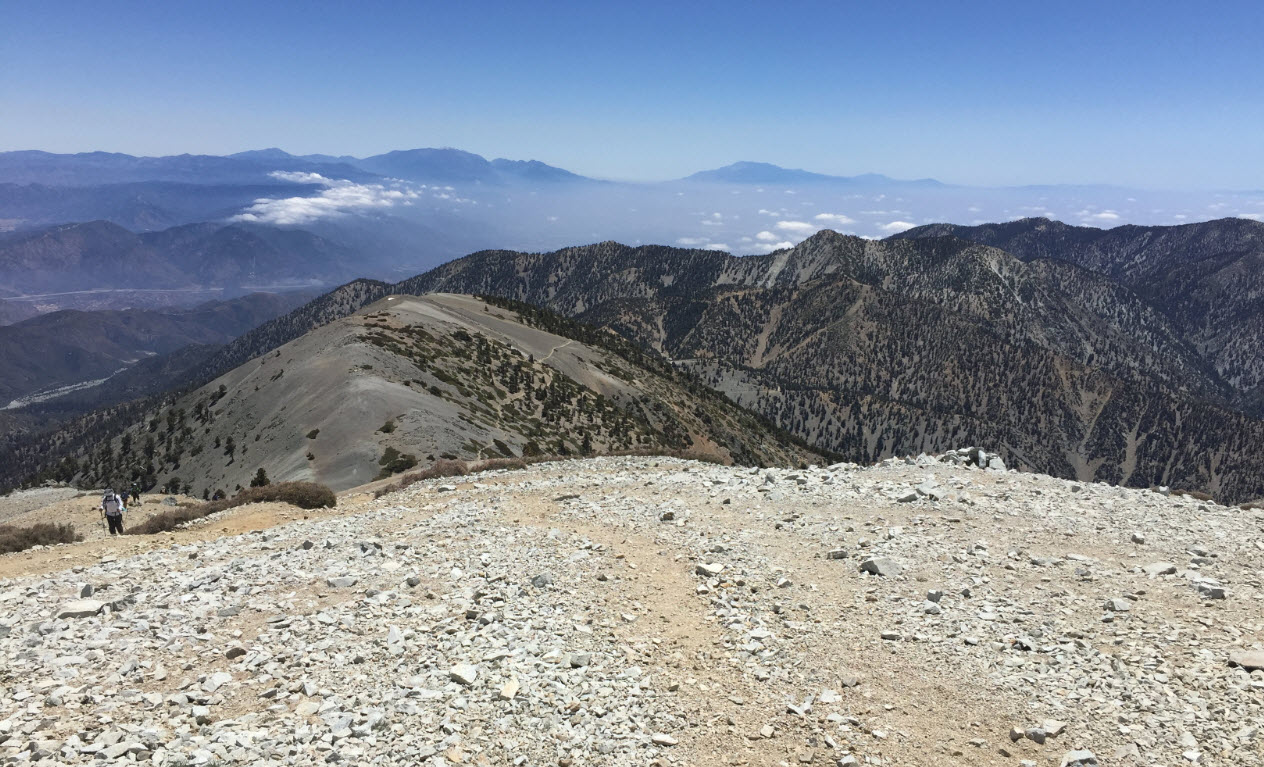 This is looking down just before leaving the peak onto the ridge I pointed out earlier. The path we saw from there is the same we see here as a thin thread in the middle of the photo. The descent from here is also quite steep. 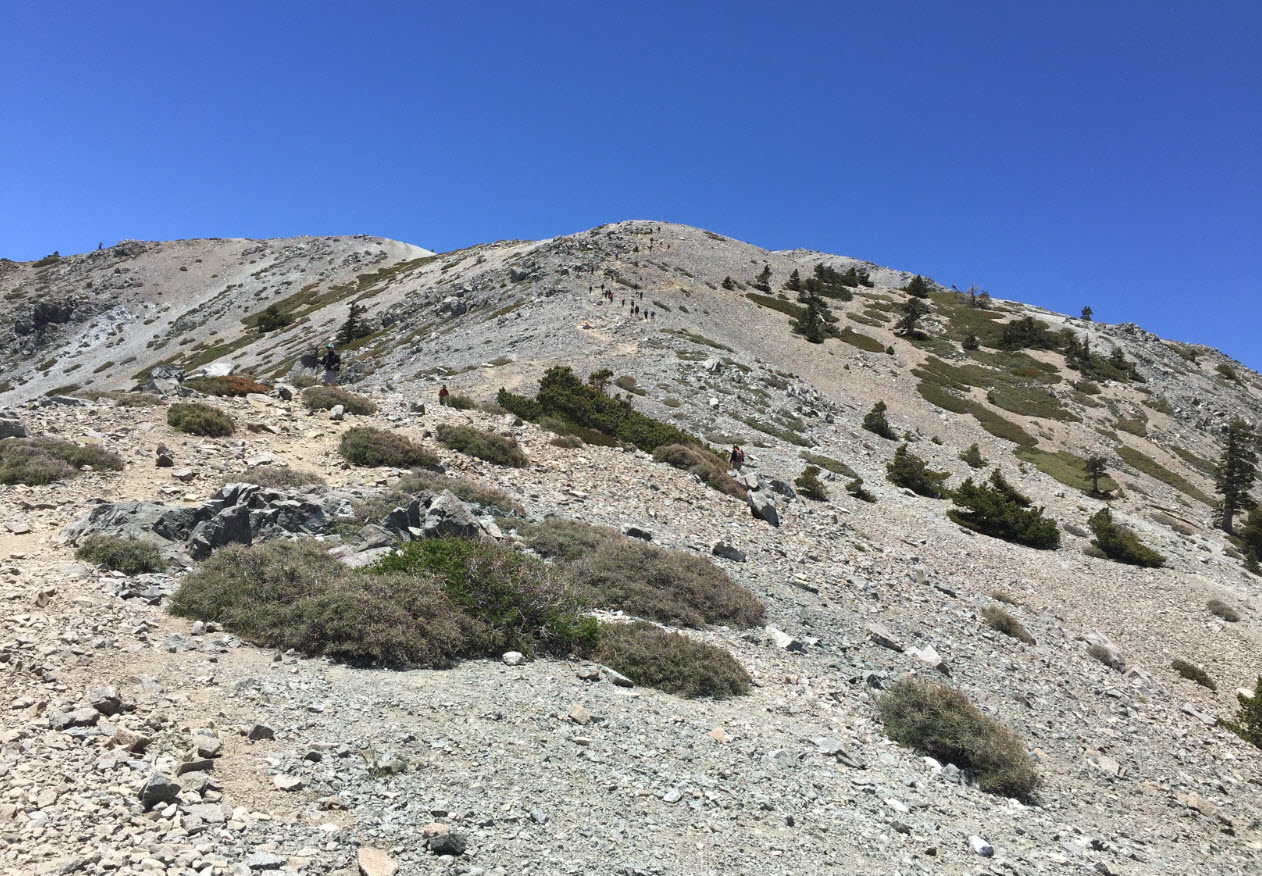 Here I am down on that ridge, looking back up from where I just came. The very back is the peak, and if you look carefully in the center of the picture, you can see hikers, like ants, going up and down along the path. 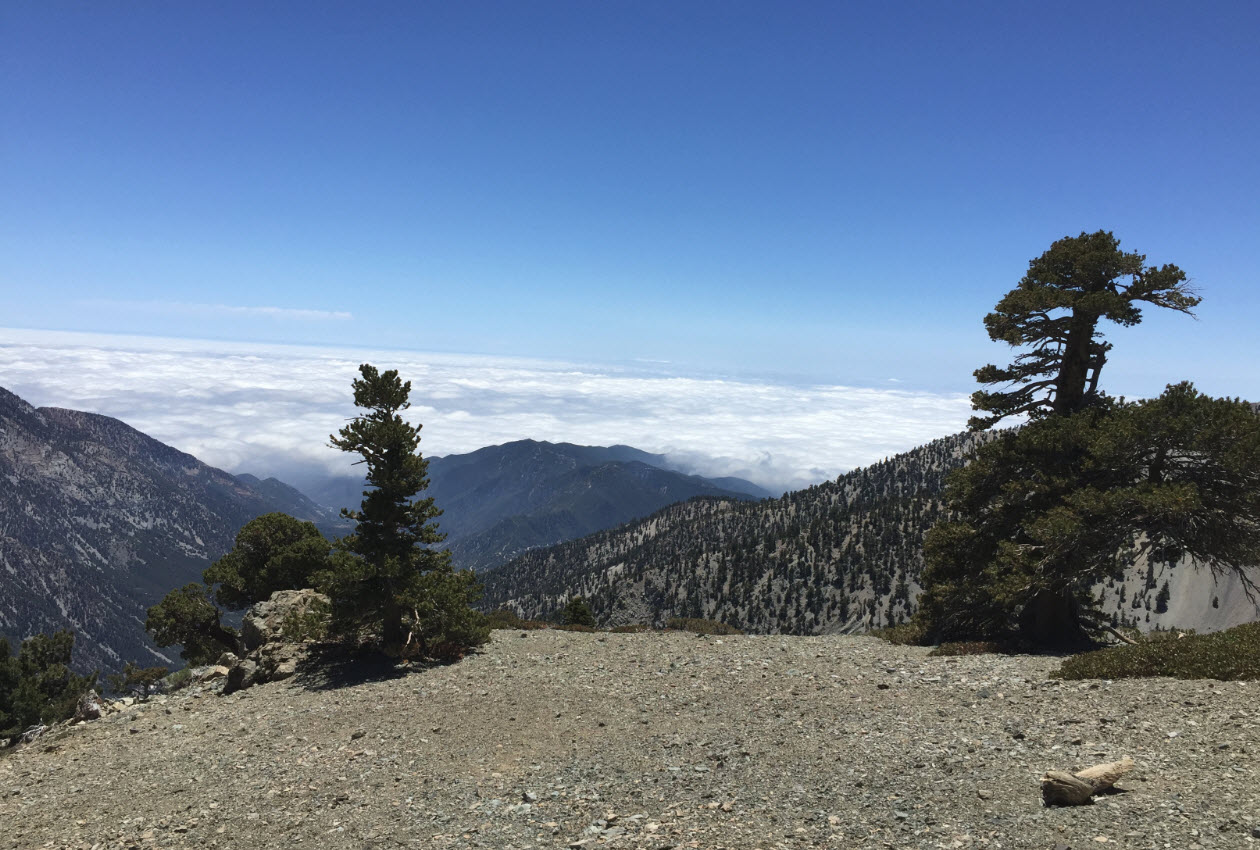 Turning south from the same spot, another look into the Los Angeles valley. It’s still in clouds down there. Here the wind is whipping. The trees here are pretty tough. 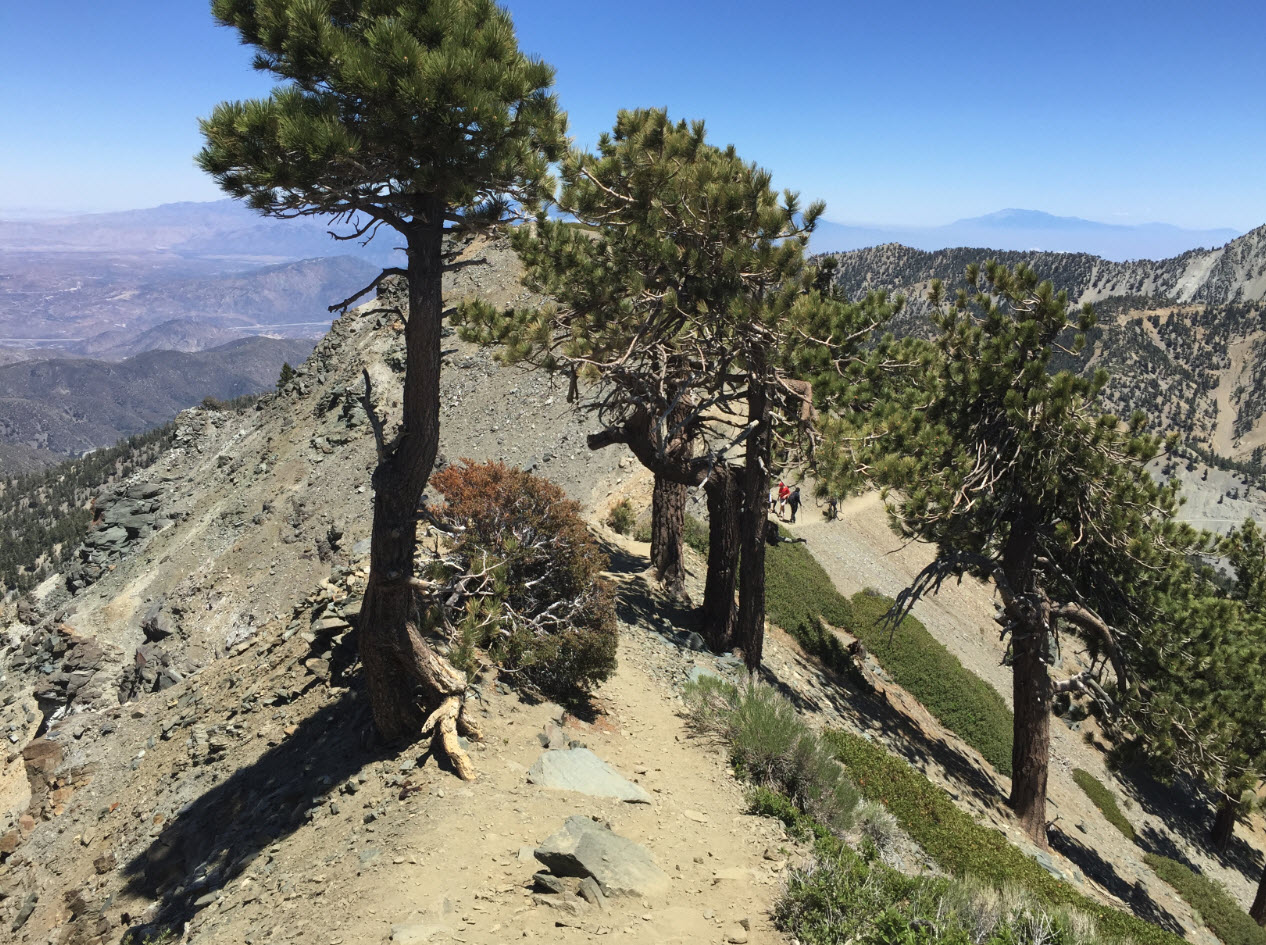 The most remarkable feature of this hike is the “Devil’s Backbone,” a ridge with steep drops to the north and south, and the path is right on top of it. Here we see the beginning of the backbone with a few hikers on the way up. 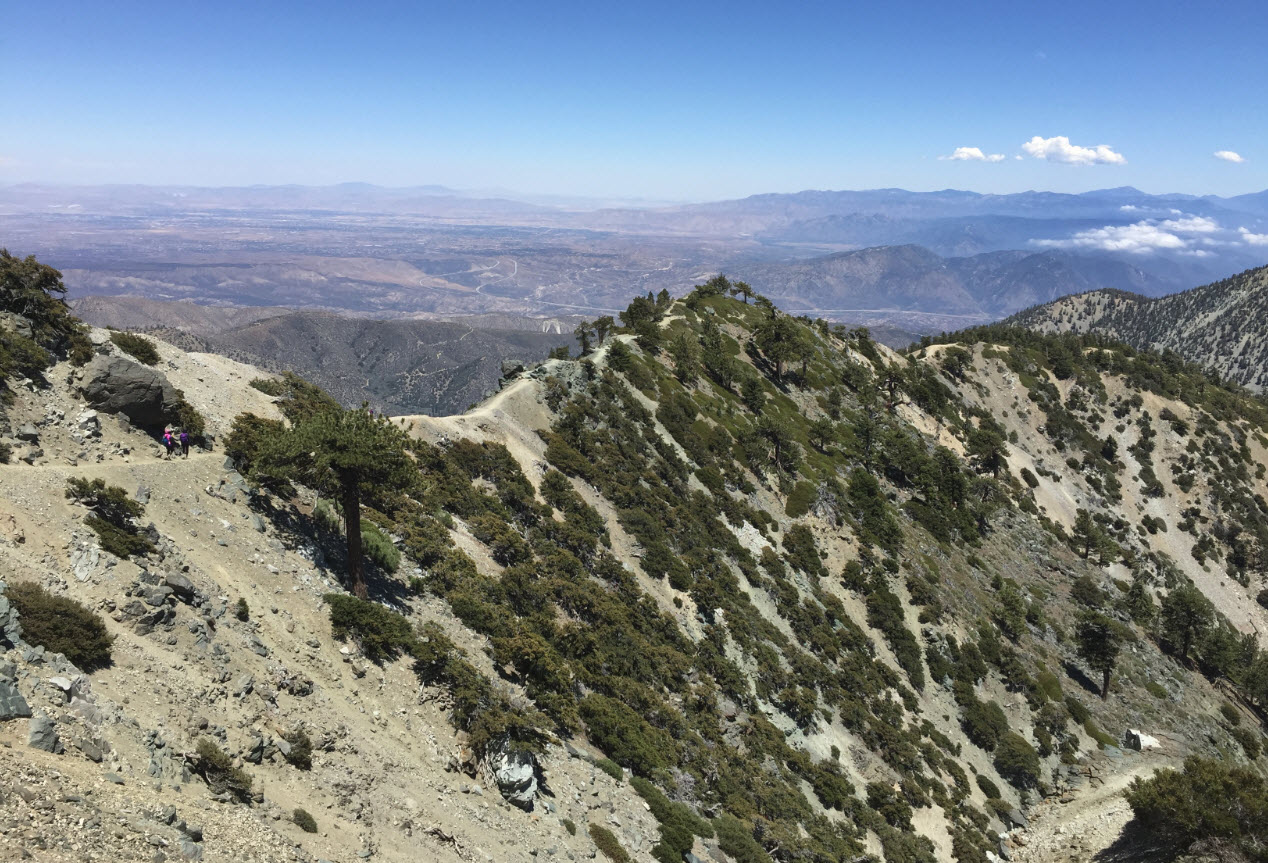 Here is another view of the backbone. In the distance in the back is the Mojave Desert to the north. Note that it’s not cloudy there like in Los Angeles to the south behind me. In the upper center of the picture you can see the thin lines of I-15, the major freeway leading from San Bernardino up through Barstow to Las Vegas. Las Vegas is about 4 hours north of here. 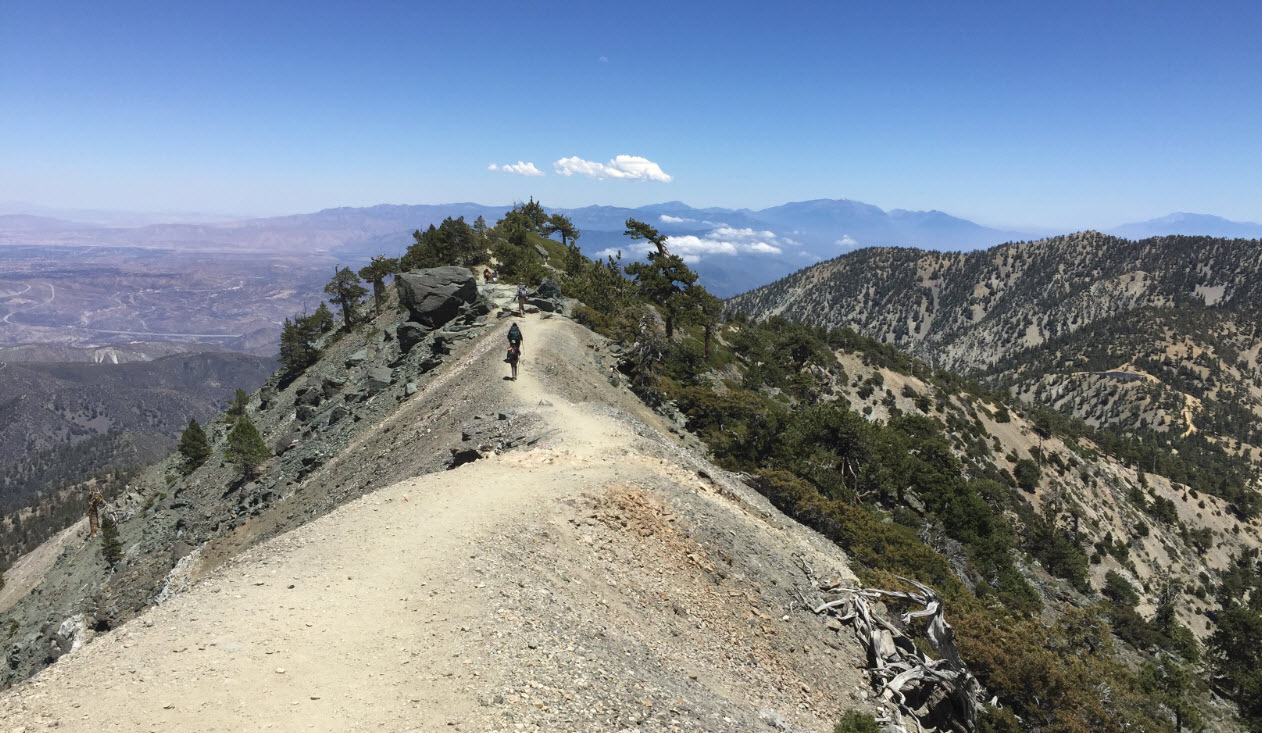 Here we are right on a section of the backbone. This is not a place to get dizzy or trip. There are sections here where the mountain drops 1000 feet in both directions, straight down. 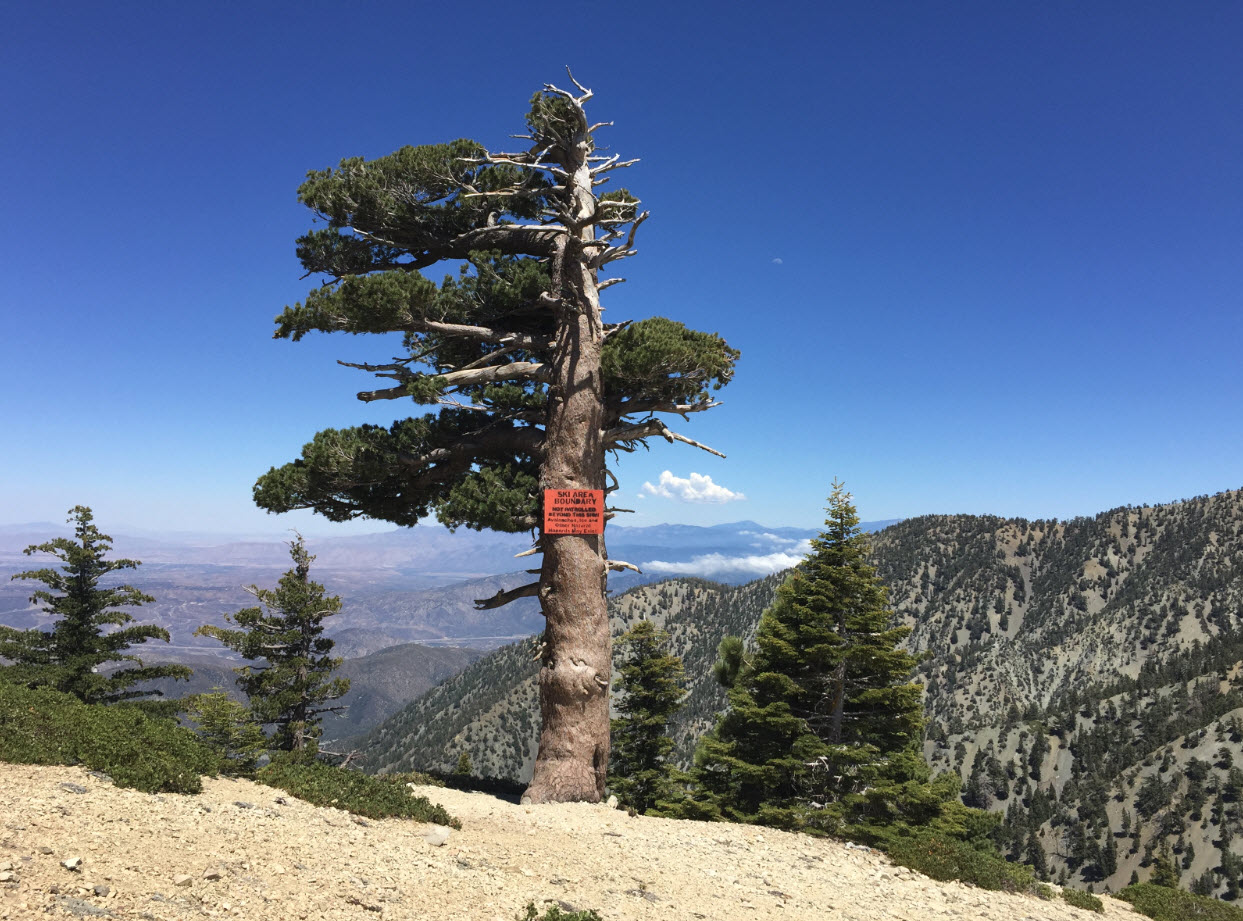 At the end of the backbone is the Mt. Blady ski area. I am at about 8500 feet altitude here just about at the top of one of the chair lifts. The sign tells skiers not to go down that way. Funny, it’s basically a cliff. 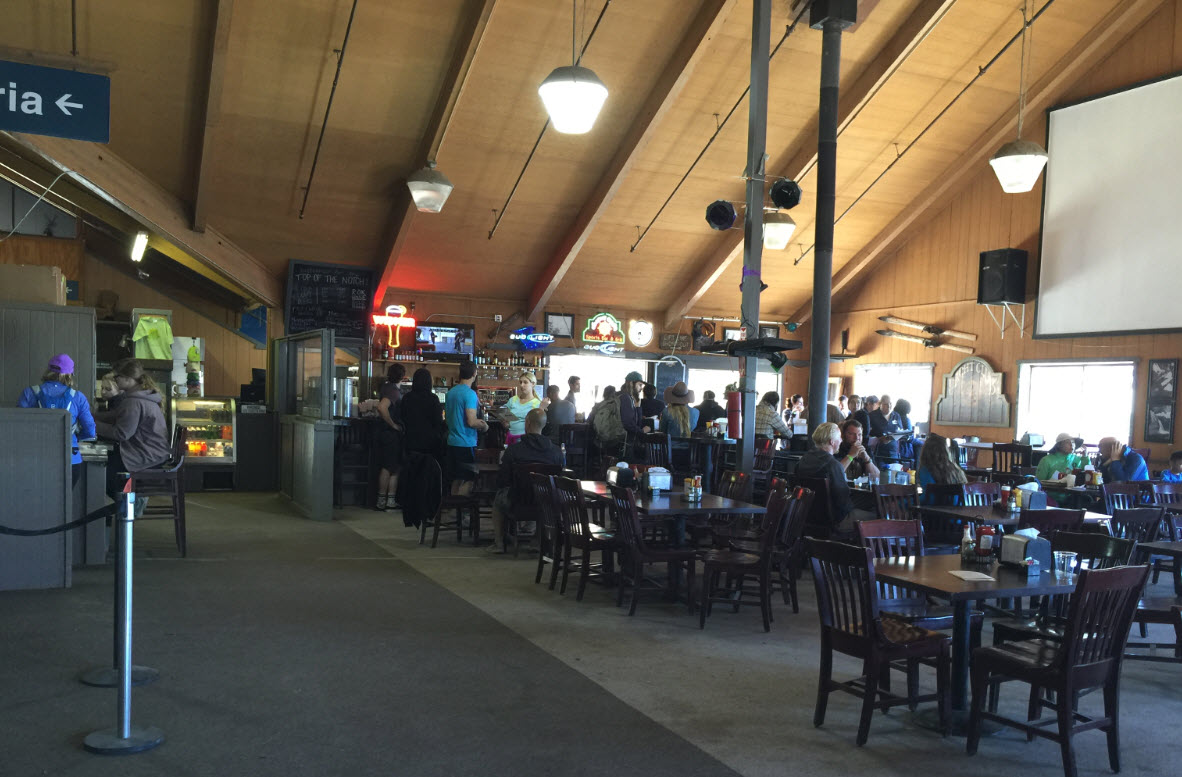 Of course, where there is a ski lift, there is a lodge, not something I usually find at the top of a mountain. It’s a welcome spot for a break. Forget the granola. Here is beer. 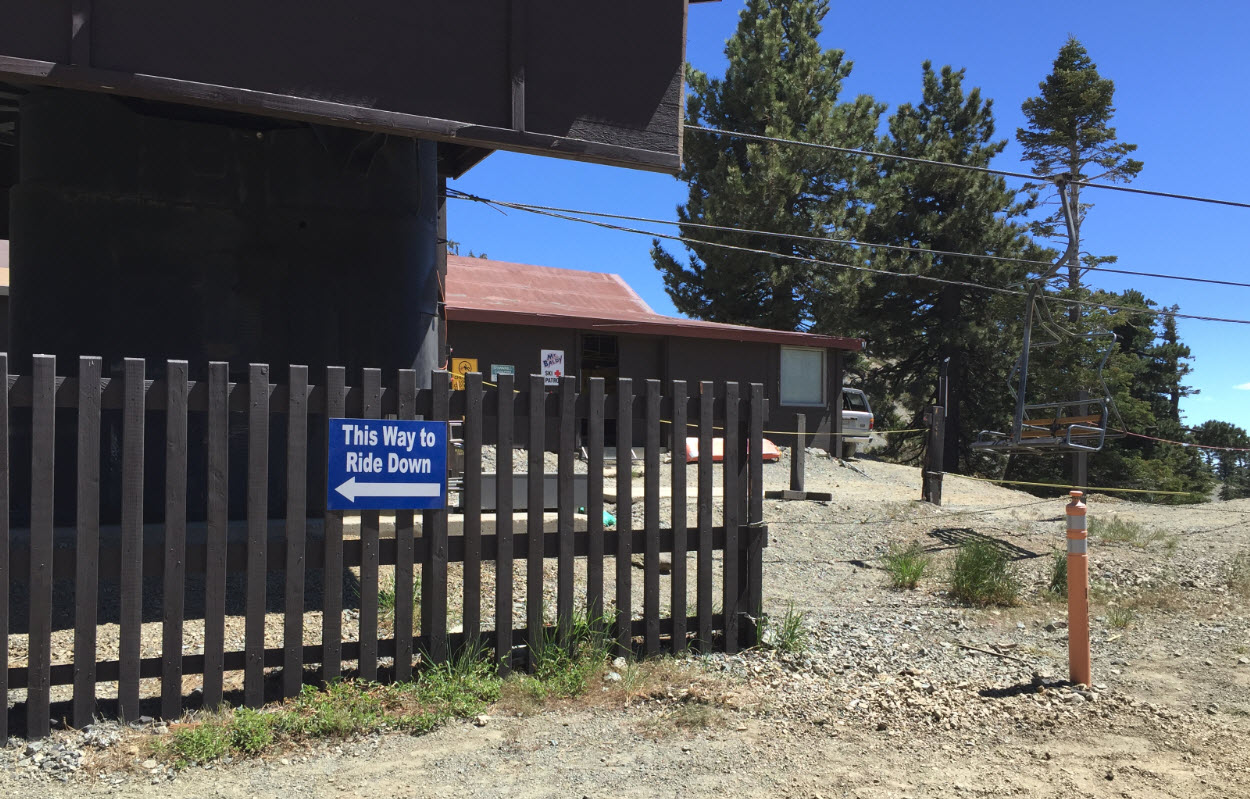 I could have hiked down the last 3 miles on a boring dirt road to the parking lot. I thought about it. On my previous hike on Mt. Baldy I hiked up that way. But my knees screamed for a break. That chairlift and the sign “This Way to Ride Down” were too inviting. I cheated. A $12 ticket did the trick. 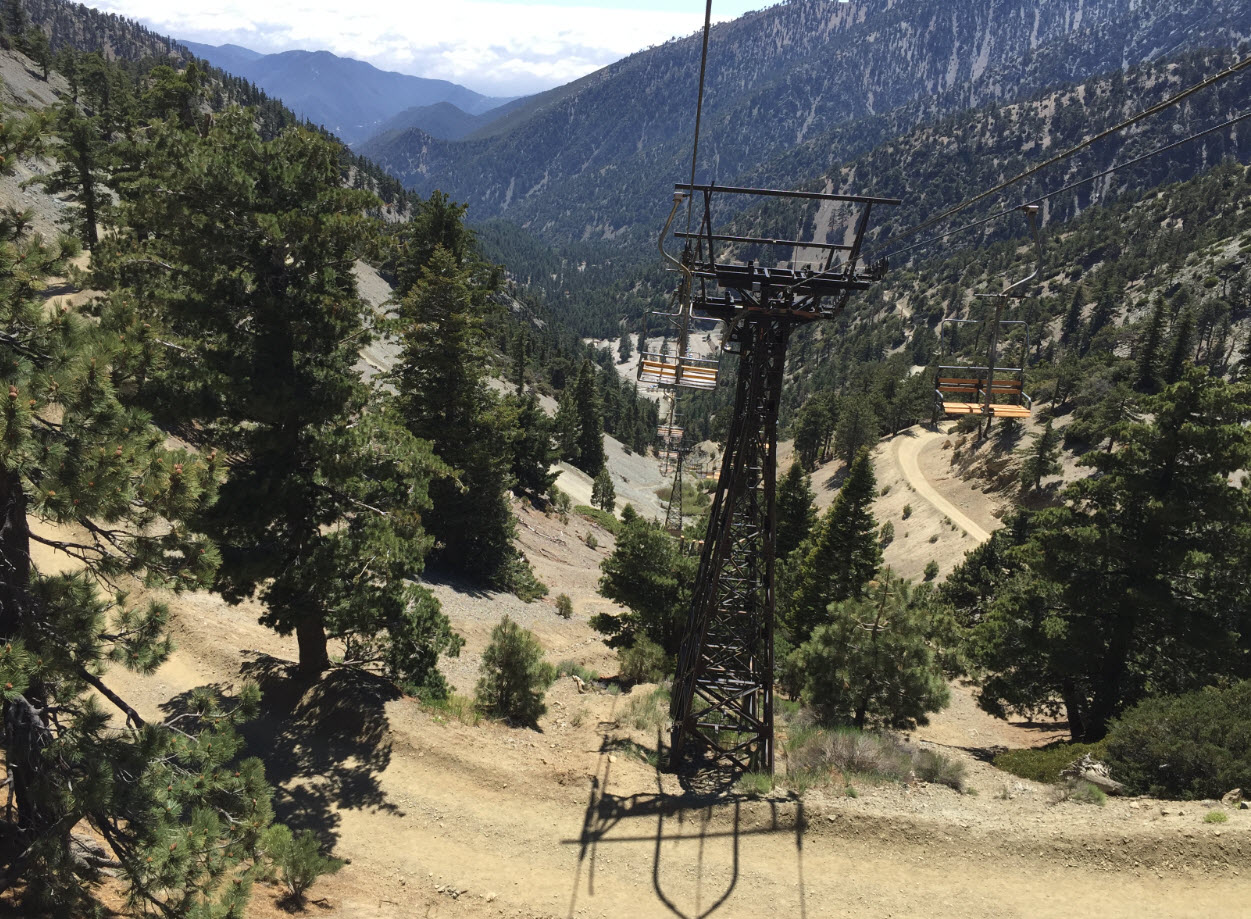 The San Gabriel Mountains are one of my favorite hiking destinations. I made the painting above after a trip in May 2013. One of the most beautiful places in the world.

Of course, there was fierce opposition.

Assemblyman Tim Donnelly, who was protesting the “Federal land grab” of the Monument (the land is already Federally owned), and an unidentified woman who said she “feared the UN would seize control of the San Gabriel Mountains if Obama were to declare them a national monument (no comment).

Protesters from groups like Public Lands for Public People, the owner of the Mt. Baldy Lodge and the California Off-Road Vehicle Association (CORVA). They were led on by a number of public officials from the San Gabriel area.

I am grateful to President Roosevelt the First for his conservation efforts and the creation of the National Park system. This is one of the fundamentally “good” functions of the federal government. If the government didn’t make such efforts, there’d be coal, gold and silver mines in all our mountains, there’d be McDonalds restaurants on top of our peaks, there’d be roads to ski resorts everywhere in our wildernesses – there would be no wilderness left.

Modern Hiker (where the above quote comes from)

I feel strongly that wilderness and natural beauty in our country is much more important than gross national product. The generations that follow us will be grateful.

I would be glad to have more of my taxes allocated to conservation. Sign me up!

Mt. Baldy, sometimes called Mt. San Antonio, is the peak of the huge mountain range just south of Pasadena. It’s 10,064 feet high. The trail head is at 6,100 feet, so it’s a 3,900 foot and very steep climb. I got the idea from Kyle blogging at Hiking Angeles Forest. He was there the weekend before me and pointed out a ridge with a number of flat spots very suitable for spending the night. You might read his account yourself. It drew me right in. On Saturday, May 4th, I made my attempt.

I had been on the top of Baldy several times before, but each time I had taken the route via Baldy Notch and Devil’s Backbone, which is much less step. Also, each time before I did day hikes, carrying a day pack only.

This was a two-day trip, however, and I wanted to break in my new pack. Fully loaded, at the parking lot, it looked like this: My  plan was to hike to Kyle’s Ridge (here you go, I gave it a name) on the first day. I brought five quart bottles for water, only two of them full. I figured I’d need no more than two to reach the creek at the Sierra Club Hut (see below).

Once at the ridge, I’d build my camp, then hike down again to the hut and the creek, fill up all five water bottles, and hike back to the ridge, this time carrying only water.

Five bottles of water should be enough to remain hydrated through the night, provide for breakfast cereal, then keep me in water for the ascent to the peak the next day, and finally all the way back down via the Devil’s Backbone.

Here is the map of my trip, showing my actual hike.

You can see the trail head and the start of my hike at the red arrow. The first 0.7 miles is a fairly steep paved road ending at a major switchback with a great view of San Antonio Falls. Then the road becomes dirt. Following it leads up to Baldy Notch and it was to be my way back down. After 0.3 miles exactly at way point 022 on my map, there is a little side trail that may be easy to miss, climbing up the slope on the left of the road.

The word steep is no kidding here. This is definitely as steep as “the wall” on Vivian Creek Trial on Mt. San Gorgonio. I labored up weighed down by my pack and I found myself surprised how hard it was for me. I blame some of it on my new pack, but most of it on my lack of practice. It had been almost two years that I had done an overnight trip carrying a full pack. I was glad I was alone, lest I embarrass myself by my slow pace.

At 1.2 miles, the view opened up and I saw my destination:

The blue arrow points to the peak of Mt. Baldy, where I wanted to be the morning of the next day. The red arrow points to the Sierra Club’s San Antonio Ski Hut, which was built in 1935, burned in 1936 and rebuilt in 1937. If you enlarge the picture you can see a little white dot, which is a reflection off the hut – I know, not much to see from a distance of 1.7 miles.

And a long, long, long 1.7 miles seemingly straight up the mountain it was. Here is a typical stretch of trail. Just about three hours and 2.7 miles after leaving the parking lot I arrived at the hut at 8,200 feet altitude. The hut was occupied by a group of at least 20 or more rambunctious boys and a few men, all in identical T-shirts, maybe a church group or scouts. It was a noisy lot, so I had my lunch break outside on a bench.

Looking down from my spot, I had a nice view of the valley from where I came. Looking north-east in the other direction, the top of the ridge in the background is the peak of Mt. Baldy, another 1.4 or so miles of trail and 1,800 vertical feet away. But now I faced the crux of the problem. This picture shows Kyle’s Ridge from the hut, basically where I needed to go now, and then back here to fetch water, and then back up again. This is the blue section of trail I painted in the map between the green and blue arrows. With three and a half hours of daylight left, and my legs already weak from the climb up, I didn’t think I could do it. The altitude, the exhaustion, the weight of the pack, the time of day, all told me NOT TO DO THIS.

I considered for a minute to fill up all five bottles and make the trip only once, but even that seemed dangerous in my weak condition, adding six or seven pounds of more water to my already heavy load.

Finally, I considered spending the night near the hut. I decided that the trip up to the ridge under a full pack the next day would still be a challenge, and the presence noisy boys topped it off.

I finished my apple and hiked back down the trail the same way I came. I had a wonderful day hike carrying a full pack. When I got back to the parking lot two long hours later, my quads were jello from the constant braking downhill, and I was glad for having made the decision that ensured my safety.

My resolution is to come back to this spot with a day pack early one morning, go up via Devil’s backbone and come down to Kyle’s ridge, then the hut and complete the circle counterclockwise.