John McCain recently made a lot of headlines. His decision to kill the repeal of the Affordable Care Act may have been the most influential, and the most controversial, vote of his career. His illness may require him to retire soon, but I have always believed that he was an American hero.

I haven’t always agreed with him. If you search this blog for the name “McCain” you will find many posts, some negative, and some praises. I don’t always have to agree with a man on everything to respect him. Let me say it right here: I have always respected John McCain.

If you are at all interested in McCain’s career, here is a review of his book Faith of My Fathers. 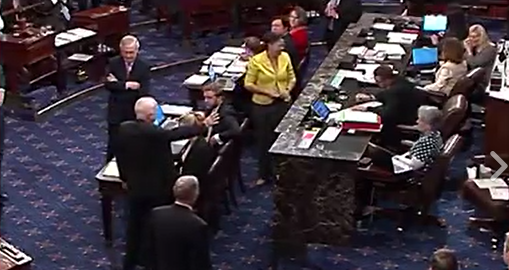 Here is the moment when Senator John McCain voted “No” on the repeal of the Affordable Care Act. Mitch McConnell, standing by with crossed arms, watching every senator vote, walked away defeated moments later. He knew he didn’t have the votes.

It has been incomprehensible to me how a government, by the people, for the people, would want to take action that takes insurance coverage away from a significant percentage of its people.

Picture yourself being one of those 26 million. You may have had a pre-existing condition like diabetes, and now, by the stroke of a pen by your president, that coverage is gone and gone forever. You have diabetes, and you can’t get insurance that you can afford anymore.

Why? Because evil Obama made it so that wealthier Americans pay more taxes to fund shortfalls. Because insurance and pharma executives make millions of dollars a year and their companies are wildly profitable because their non-competitive practices are sanctioned by our laws and regulations. And because a significant percentage of our government is bought off by those individuals and organizations and they have a president who can’t think beyond soundbites on Fox News and will sign anything as long as it serves his aggrandizement.

Congress Republicans wanted to score a point, with the president, and with their paymasters. Now we have a White House that not only appears to have been put in place by the aid of an adversarial power, but it also actively sabotages one of the laws of the land – the Affordable Care Act. Rather than upholding the laws, the government is sabotaging the laws.

Trump says he wants to make America great again. By throwing 10% of the adult population off their healthcare? What kind of problem-solving is that? It’s oligarchy. It’s making himself and those in his orbit in debt rich. I do not understand how he can have 37% of the population is his support. A significant percentage of his own supporters would lose their healthcare coverage. Really? That’s a lot of people supporting Trump with no healthcare. Somebody help me understand that.

McCain understood that, and he listened to his constituents. Unlike dozens of his colleagues in the Senate, who also must know deep down how wrong all this is, he showed backbone and he did what is right for the American people. Too bad there isn’t going to be another opportunity to vote for McCain for president.

For more reading on McCain:

See my open letter, also sent to him in hardcopy: Here.

My book review on Faith of my Fathers. I highly recommend this book to anyone wanting to understand the man John McCain and the experiences of a prisoner of war. If you only read one chapter, read the one about “John McCain’s Towel.”

Here is an article about McCain and torture.

On March 4, Mitt Romney, in an interview with Neil Cavuto, strongly denounced Trump:

Donald Trump is phony, a fraud. His promises are as worthless as a degree from Trump University.

McCain is a decent man of character and integrity, who made one serious mistake of historical consequences: Picking a boor like Sarah Palin, and sticking with her. Otherwise, history might have run a very different course.

The stature of Trump cannot even be compared as being in the same league as that of both Romney and McCain. Those two men have united the GOP behind themselves and neither was able to win – not even close.

Obama beat McCain by getting 365 electoral votes against 173 by McCain.

Neither election was even close, and that was with the GOP united.

In 2016, the GOP, with its most visible and powerful figures, including McCain, Romney, Ryan and McConnell, is not behind Trump, and is really not behind Cruz, a tea party religious zealot, either.

“A house divided against itself cannot stand.”

The GOP is a house divided, with no chance of coming together in just the eight months it’s got left until the election. This house divided stands against a Democratic party with two strong candidates, one of which will bring the other into the fold when the time comes, against a party that won the last two elections.

The GOP is dissolving as fast as the glaciers of the world.  I may not see another Republican president in my lifetime. 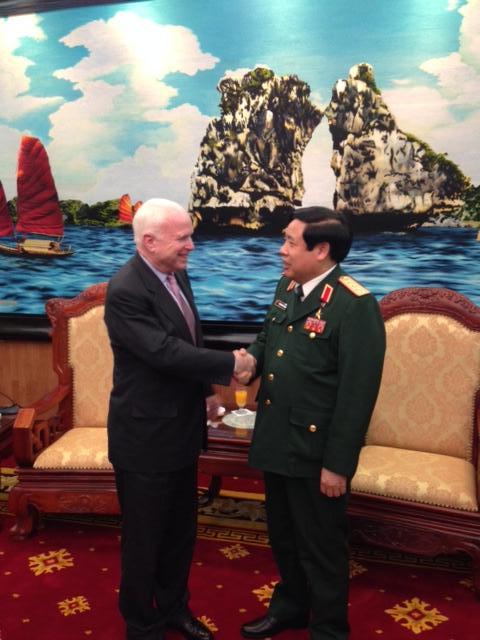 This must be strange and difficult. McCain was a prisoner in North Vietnam for years in the early 1970s. He was humiliated, tortured and beaten, kept in solitary confinement, deprived of medical aid and nourishment.

I learned about McCain’s journey in his book Faith of my Fathers which I reviewed here.

I just re-read that review and this was my closing paragraph:

As I was reading this, enthralled in the story, amazed how any man could endure such hardships and make such sacrifices, I kept having to remind myself that this man I was reading about, and his time in the 1960ies, was the same man that was all over the news right now as the nominee of the Republican Party for president. It didn’t seem real, or possible.

I highly recommend reading Faith of my Fathers to anyone wanting to understand the man John McCain and the experiences of a prisoner of war. If you only read one chapter, read the one about “John McCain’s Towel.”

I can only imagine that going back to Vietnam after the tortures he has endured there must be very challenging.

You can buy the book here.

McCain is introducing a bill to unbundle cable packages.

I hate cable TV contracts. We just reduced our bill by $60 a month by removing some bundle that I didn’t know we had and therefore never watched.

Call me a simpleton, but I watch 3 channels:

Now you have it, that’s all I watch.

I want a TV plan where I can check those three channels, pay $5.75 a month, or whatever it will be, and be done with it.

The cable companies can keep their own drivel and not charge me for it.

This is the most exciting thing I have seen McCain do in years!

Senator McCain has stated that he thinks Susan Rice is not very smart. This is all over the media – example here.

It turns out, Rice was the valedictorian at National Cathedral School in Washington, D.C., a private girls’ day school. She went on to get a B.A. in history from Stanford University, where she received a Truman Scholarship. She went on to win a Rhodes Scholarship, attended  New College, Oxford, where she earned a M.Phil. in 1988 and D.Phil. (Ph.D.) in 1990, at the age of 25.

Compare that to Sarah Palin’s credentials, who was McCain’s choice for vice president:

After graduating from high school in 1982, Palin enrolled at the University of Hawaii at Hilo. Shortly after arriving in Hawaii, Palin transferred to Hawaii Pacific University in Honolulu for a semester in the fall of 1982, and then to North Idaho College, a community college in Coeur d’Alene, for the spring and fall semesters of 1983. She enrolled at the University of Idaho in Moscow for an academic year, starting in August 1984, then attended Matanuska-Susitna College in Alaska in the fall of 1985. Palin returned to the University of Idaho in January 1986, and received her bachelor’s degree in communications with an emphasis in journalism in May 1987.

I don’t know who is smarter, I can just see  the record.

But McCain seems to have interesting judgment about smart women.