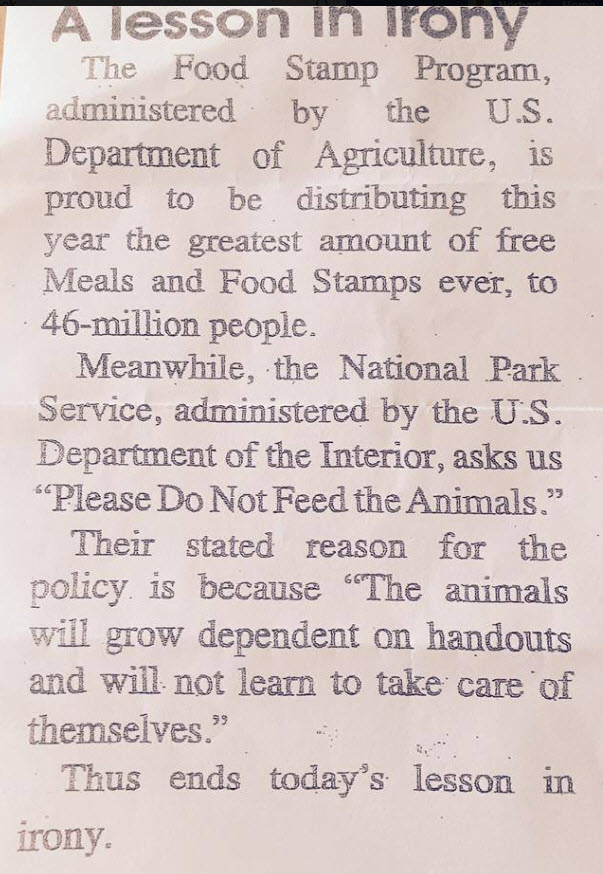 I wonder what the person posting this is offering as an alternative? In his post, he is not offering anything. So I must assume that he advocates abolishing the food stamp program altogether.

I have written plenty about food stamps in posts in this blog. Just search for Food Stamps and see. Here is one with statistics on the food stamp budget and the Afghan war.

I have also analyzed the use of food stamps by state and have found the red states, where the politicians who condemn food stamps the most come from, are using food stamps almost at twice the rate as the blue states.

Let’s for a minute ignore all the other myths being spread about food stamps and just focus on children. It’s not the fault of the children that their parents are poor. I myself grew up in a poor family, and I remember how scary it was as I got older and I realized that my mother often didn’t know where the next grocery purchase was coming from. So what are we suggesting we do with those children who are hungry?

We can turn off the spigot of food stamps and see what happens. It won’t be pretty.

Or we can keep our senses, remember to compare the food stamp budget to other insanities we spend billions of dollars on every month and year, and make an effort to force Wal-Mart and other companies to pay their employees adequately so they don’t have to rely on food stamps.

Then we can focus on education of our children, and raising an educated generation with skills that the economy of the 21st century badly needs and is willing to pay for top dollar.

But if we want our children to stay in school and pay attention, we must make sure that they are adequately nourished. And that is one of the reasons why we have a food stamp program.

If you have other, better suggestions, I am listening.

Senator Arthur Orr from Alabama introduced legislation to not allow food stamps to be given to recipients who have cars. Among other things:

It also adds an entirely new level of bureaucracy, including a requirement that aid recipients sign a contract vowing to strictly adhere to the program’s rules or face jail time.

This is crazy. He wants to put people in jail for not following the food stamps rules? Jail is more expensive than food stamps.

The entire U.S. food stamp program costs about $72 billion a year. That’s how much the Iraq war cost us every year while it was going on. Did you know that 77% of all food stamp recipients are children?

Is it the children’s fault that their parents can’t find a job that pays enough of a wage that they can live on?

Walmart is the country’s most profitable corporation and one of the biggest in the world. An average employee at Walmart makes $8.81 per hour or $15,500 per year, which is well below the federal poverty line for a family of four.

Therefore, people who work at Walmart are forced to enroll in the taxpayer-funded food stamp program to feed their children.

Looking at this another way, Walmart is keeping their wages low so the public takes care of their employees using food stamps which they again use to purchase goods at Walmart. The company profits on both sides of the deal, and the American taxpayer pays the bill.

Studies have shown that a single Walmart can cost taxpayers over $1 million per year.

Now Senator Orr says we can’t give them food stamps if they have a car. So what happens? The parents need a job at Walmart because they can’t find any other decent manufacturing job in many of America’s small towns. Of course they need a car to get to work. They need food stamps to feed their children, but they can’t have a car to have food stamps?

What does he want to do? Let them starve? Euthanize them?

Being poor in our country is “being bad.”

I think churches should pay taxes like the rest of us, and our businesses. Churches are businesses, in my opinion.

In 2013, churches would have paid over $83 billion in taxes. Compare that to $76 billion we pay for food stamps for everone in the country authorized to receive them. This means if churches paid taxes, food stamps would be paid for. Don’t churches preach about feeding the hungry?

We would still have $7 billion left over. That would be enough to house all the homeless in the country.

But for some reason, churches don’t pay taxes.

Yet, when people go to church schools for “education” our government subsidizes them by paying for their childcare while they are “learning.” Check this article about Hasidic Jews in New York, which deals with exactly this subject.

Looking at this chart of SNAP participation (food stamps) from 1969 to 2013, several things are evident:

From the beginning, enrollment went up steadily through Nixon, Ford and Carter. When Reagan came in, it immediately leveled and then started declining moderately but steadily.

Clinton comes, and it drops sharply to pre-Reagan levels.

Bush 43 comes in, and we see the same, sharp steady climb of 41 repeated. What’s with the Bushes?

Then the whopper: Enrollment has almost doubled again since Obama took office. It rose in his early years, but is still rising now in the second term. This is why many call Obama the food stamp president.

I think I want Clinton back. But I can’t.

Oh, wait, there is Hillary. Do we think she bring food stamp enrollment back down again?

One of my readers of a food stamp article posted this comment anonymously:

Very interesting! I am from third world country (Russia). We have not such food stamp program. If you have no money to buy some food – just die. Our country don’t care about own citizens whose are handicapped or retired.

It’s Thanksgiving evening, my favorite holiday. I think about what I am grateful for. This post of only 49 words puts things into perspective for me tonight.