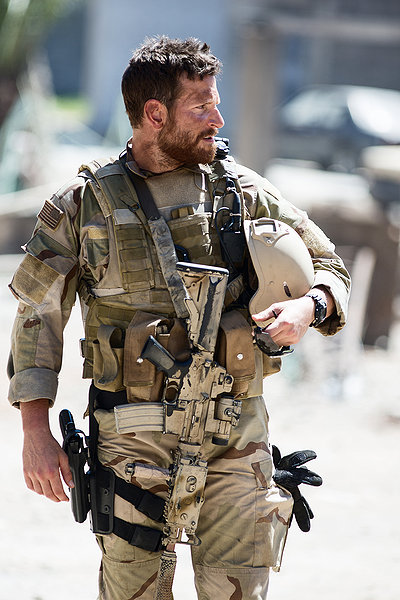 I always find it most difficult to review a movie when everyone knows the outcome, pretty much everyone has seen it, and everyone has an opinion about it – worse, when it’s been discussed on the News for weeks.

American Sniper is the Clint Eastwood directed movie about Chris Kyle, the most lethal sniper in U.S. military history. He was a Navy SEAL and became a living legend during his four tour of duties in Iraq for saving countless American soldiers through this amazing marksmanship. In the end, he died a tragic death back home in Texas, while he was trying to overcome the demons of war that would not leave him.

Chris could only do what he did because he first believed that it was his duty to protect his comrade soldiers, and because he believed that he was protecting his country – and therefore essentially his family.

American Sniper was portrayed by some critics as a glorification of war. Others said that it didn’t question the legitimacy of the war sufficiently. That may be true, but I don’t think Chris with his book and Clint Eastwood with the movie tried to moralize about the war. They both wanted to tell a story that needs telling, over and over again.

I am lucky, because I never saw war firsthand. I never saw a man killed. Watching the scenes of urban battles, with soldiers going from house to house in Iraq, kicking in doors just to find an Al Qaeda leader, brings to light the insanity and uselessness of the war in the first place.

I found myself sitting in a theater watching American soldiers getting killed and maimed, watching Iraqi children getting tortured by their own countrymen, and I questioned why the whole thing was going on. I may be completely mistaken, but by doing what we were doing in Iraq we fanned the flames that cause extremists to rise up against us. We basically shot their country to pieces, created a power vacuum, so they themselves could descend back into ethnic and religious strife that has been raging for centuries before us. How an American soldier, like Chris Kyle’s own brother, reconciles this with protecting his own country, is beyond me.

I know that in the above two paragraphs I have not reviewed a movie, but moralised and stated my own opinions.

American Sniper is the kind of movie that makes me think about these things, and I think it will make every viewer think about them. Is it really worth it to do this to our young men and women in uniform?

American Sniper brings these questions to the forefront – and that alone is worth it.