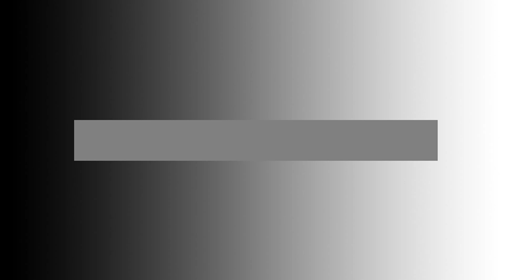 The bar in the center of the image is actually one solid gray bar, not a gradient. This is hard to believe. You can just place a piece of paper above the bar on the screen. Still not convinced? To see the proof, click here, and scroll down to the animated version – and picture credit.

This shows me how much our perception is subjective. I would swear in a court that I saw a bar that was lighter on the left and darker on the right.

Two thoughts struck me when I saw this picture, and a third was bestowed upon me later.

1. Oh how the human eye deceives. See my other post just before this one to that effect.

2. There are some man-made places in the world, that, even though I have never seen them in person, I still instantly recognize them on a picture. Those are true works of genius. Some of them include the Sydney Opera House, the Eiffel Tower, the London Tower, the Empire State Building, the list goes on.

3. Then a faithful reader pointed out to me that my second point made no sense – since the building in the picture is actually the Lotus Temple. Thanks, MB, for saving me from looking like an idiot. Now I know what the Lotus Temple looks like. Which brings me to the 4th point:

If  you haven’t figured out why the giant is so big, check out his shadow. That’s where the clue  is.

We have all taken pictures of a glorious sunset, the best ever, only to find later that the photographs don’t quite do it justice. I have therefore often refrained from taking pictures at all at amazing places or events, like the Grand Canyon, a sunset, or a moonrise, or a concert, since the time spent fiddling with the camera just took away from my attention to the actual event and therefore the experience itself.

On a recent road trip I experienced this more than ever. I was driving across the Mojave Desert. Endless sand flats, distant mountains, grand skies dominated the landscape. Then I saw a freight train approaching. Four locomotives pulled a seemingly endless trail of wagons reaching into the distance as far as the eye could see. I saw an idea for a dramatic painting. A freight train in front of the Mojave. The train was colorful, it popped out of the desert landscape vividly and in three dimensions. My eye saw the painting forming.

Since I was driving down I-40 at 70 miles per hour on an empty freeway, I just pulled out my iPhone and snapped a few pictures of this stunning site. And here is the result:

My eyes didn’t see the glare of the windshield and bug stains and dusty wiper smears. My eyes saw the train huge and impressive, making its way down the track with powerful engines across a forbidding landscape. My eyes saw brilliant colors and stark shapes and movement of the train across magnificent desolation of the desert.

My eyes saw what they wanted to see. But the camera saw what was actually there. Reality let me down.

That’s why artists need to go out to be surrounded by nature to do their work, at least some of the time.

Look at these Korean women. Do they not all look very similar? It’s almost like looking at the same model, using different hair styles, makeup and clothes.

They are actually all in the same Korean beauty pageant.

We Westerners say that all Asians “look the same,” don’t we?

This is because they all get the exact same plastic surgeries and the surgeons follow the same formulas for noses and eyes and everything else they had done, including fillers, cheek implants, forehead implants, eye jobs, nose jobs, jaw reduction, breast jobs, calf muscle implants, and fat grafting. Every single one of them has had nose and eye surgery.  Even the makeup they use is the same.

Apparently, Koreans can’t tell them apart either.  They are jokingly referred to as “Samsung Robots.”

Once they become mothers, however, the problem will be that none of their daughters will look anything like them. They’ll have their natural faces.

I am really thankful that I am not a Korean Beauty.

Here is a special kind of art and illusion by Kaia Nao – that is almost unpleasant. Try to read the text. If this freaks you out, go to this site where I found this and check the comments for hints. As an artist, I often struggle picking the right colors, mixing the right shades, so the resulting canvas matches what I see, and that way creates an illusion of reality for the viewer of the painting. My technique is not to mix paint much on the palette, but rather on the canvas itself. My paintings take a long  time because I keep putting on transparent layers of different colors until I have the shade I want.

The dominant concept above is: mix colors to match what I see. But what do we actually see as compared to what we THINK we see.

Watch this video below and you’ll never trust your perception of shade and color again. When I was in college, studying art, I used say that orchestral music was one of  the most complex forms of art, since it required so many participants for a work of art to be created, including the composer who dreams it all up, the various orchestra instruments and their players, with lifetimes of practice each, the conductor and the theater where the concert takes place. That’s a lot of coordination.

In comparison, a lowly painter like I can just paint something in his painting corner and hang it up on a wall.

Here I found another kind of art which is completely new and entirely different from anything you have seen before, applying many different skills, from planning, storyboarding, drawing, painting, photography and online publishing, with an amazing amount of man-hours of work.

See for yourself and check out BluBlu. Make sure you have 8 minutes of time and click on the arrow to run the video.

Since the Mindfreak shows were aired on A&E in 2005 and 2006, I always enjoyed watching Criss Angel shows. I think he is the best in his class.

So naturally, when I found out that they built an $85 million theater in the Luxor for a Criss Angel and Cirque du Soleil collaboration, I was eager to go and see the show.

Last Sunday we drove to Las Vegas with the sole purpose of going to the 10:00pm showing of Believe.

Fortunately, I didn’t read the reviews before. Here are a few samples:

They are absolutely AWFUL.

If I had read these reviews before booking, I would never have gone.

I actually enjoyed the show. It was an experience and adventure. Criss Angel staple tricks are appearing and disappearing, levitation and mentalism. He did some of that. He also did a few slight of hand tricks, like the classic pulling doves out of handkerchiefs. All of it done masterfully.

The Cirque du Soleil dancing and occasional acrobatics fit well within the story line and the music, as always, was superb and contributed in a large way to the experience.

One thing I found that was new was the clever way the show mixed video with reality. There were several occasions or stunts where characters walked onto the stage out of a screen, or walked or jumped from the stage into the screen. At one time, a flock of doves (lots of them) appeared to be flying out of a screen, right into the audience, to the back of the theater, where they disappeared.

There were also sequences where you could not quite tell  what was video and what was stage reality.

When you see Criss Angel critics, bloggers or commentators, they often talk about how he “fakes” things by hanging from wires, or body doubles, etc.

HELLOOOO. This is an illusionist. When he is suspended from the air, or apparently walking on water or up a wall, he is hanging from SOMETHING.  How else would this be working. When he is performing a mentalist trick, he is not reading the person’s mind. He is simply using some trickery that has not occurred to you and he has diverted your attention from the trickery sufficiently to fool you. I also got a kick out of the people commenting about being able to see the cables suspending the human angles flying. Duh! This is Cirque du Soleil. Did they really think that we were going to think the angels actually flew?

On the other hand, of course, Criss Angel should have anticipated that, and not have an act of flying angels at all — they really didn’t add to the story and we could have been fine without it.

My main criticism was  that there was not as much magic as I would have liked. I saw David Copperfield a year or two ago live, and while I thought some of his stuff was dated, he did a lot more active magic and not so much fluff.

So yes, I can see how Believe might not have the 10 year contract lifetime, and how it might eventually flop, unless he cleans  up some of the rough edges and listens to the critics.

Because, after all, the reviews are absolutely miserable. And there must be some kernel of truth.

No, it’s not about politics, for once.

Take a look at this neat optical illusion.

You can spend hours in that site, checking out random illusions.