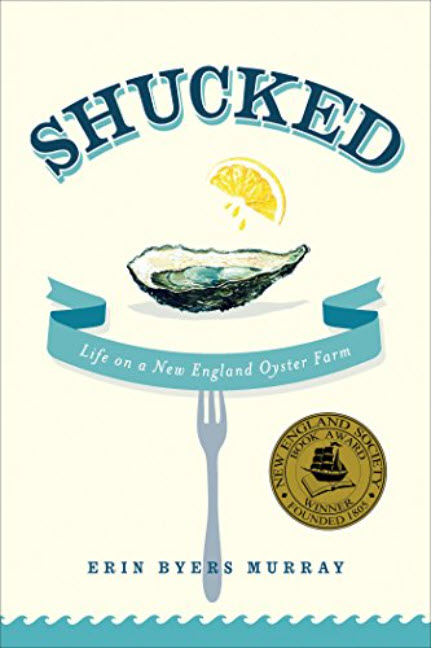 I have never eaten an oyster in my life, neither raw nor cooked, at least as far as I know. Maybe there was one in a Jambalaya or other dish once. But I can say with confidence that I have never been much interested in oysters.

I am not a cook. I always say that I am a grateful eater.

I am also not a foodie. I just came back from three days in Washington, DC and I stayed downtown, a couple of blocks from the White House, surrounded by great restaurants, and I didn’t step foot in one of them. When I am alone, Subway and Chipotle seem to do the trick.

So what was it that had me read a 352-page non-fiction book written by a culinary writer about working on an oyster farm in Duxbury, south of Boston? Simple: a friend recommended it, and I loved reading Shucked.

Erin was a young food writer who wanted to fully understand the farm to table process. Where does food come from, and  what does it take to bring it to her table?

She quit her job writing, and started working on the Island Creek Oyster Farm. Initially she was going to just do one season. She went out on the bitter cold New England bay and did backbreakingly hard labor harvesting oysters in March, learning everything about the farming of oysters over the months. Later on she worked with the seeds, the younglings that would have to be raised to be next year’s crop.

In the process, not only did she learn the mechanics of farming oysters, but also the business of oysters. Working on a renowned farm, she had access to some of the country’s most famous chefs. She was invited for a one-day internship in New York’s prestigious restaurant Per Se, and then partook in a 23-course meal that lasted for five hours.

The author vividly describes work on an oyster farm, shows the challenges of the trade, and provides a glimpse behind the scenes of the running of world-famous restaurants.

I learned a lot. I found myself googling the names of many of the chefs she talks about, and their restaurants. The book was very engaging, informative and never dull.

Now I’ll have to go out for an oyster meal, don’t I?