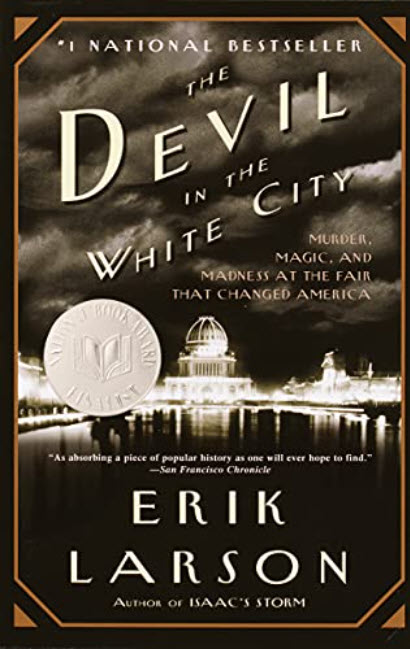 The Eiffel Tower was built for the World’s Fair in Paris in 1889. It was meant to be one the main attractions at the Fair,  and its focus was the vast constructions in iron and steel that were the great industrial advancement of that time. It took about two years to build and it inspired the world and became one of the most iconic architectural structures in the world. You cannot think of Paris today without the Eiffel tower.

After that, the architects in the United States and particularly in Chicago, the city that was vying to host the next World’s Fair in 1893, were challenged to come up with something greater than the Eiffel tower.

The result was “The White City” built out of swampland along Lake Michigan.

Why do I know all that now?

The Devil in the White City is not a novel. It’s a documentary about the building of the World’s Fair in Chicago. There is no dialog in this book, but narration and exposition of minute facts about the vision and the people who made that vision happen. Real-life characters who were associated with the fair included Buffalo Bill, Theodore Dreiser, Susan B. Anthony, Thomas Edison, Archduke Francis Ferdinand, whose assassination on June 28, 1914 provided the spark that ignited World War I, and many others. The father of Walt Disney was a carpenter at the fair. Walt probably learned a thing or two there. Finally, there  was a young engineer named Ferris, who had to try several times to propose his idea to build a giant wheel in an effort to out-Eiffel the genius in Paris and his tower. His name eventually also became a household name, as we have all been on a Ferris wheel.

And most of all, Daniel Hudson Burnham, the genius architect who went on and gave the world many buildings, both before and after the Fair, was the relentless driving force behind making the vision a reality. Beyond the White City, one of Burnham’s most recognizable buildings is the Flatiron Building in New York City.

There was also a notorious serial killer associated with the Fair. H. H. Holmes was a young, dashing medical doctor who moved to Chicago and started a spree of fraud and killing, all seemingly in plain sight. Holmes was obviously a psychopath, someone who cares about nobody and nothing but his own ego and satisfaction. To him, human beings, friends and enemies, were simple toys in the game of cat and mouse that kept him entertained. Humans were completely disposable. The book got me into the mind of the psychopath and I must honestly say that Holmes was the most evil person I have ever read about.

Seldom have I read a documentary that is so gripping, so life-like, and one that taught me so much about a time and a place in history that I really had not paid much attention to.

4 thoughts on “Book Review: The Devil in the White City – by Erik Larsen”