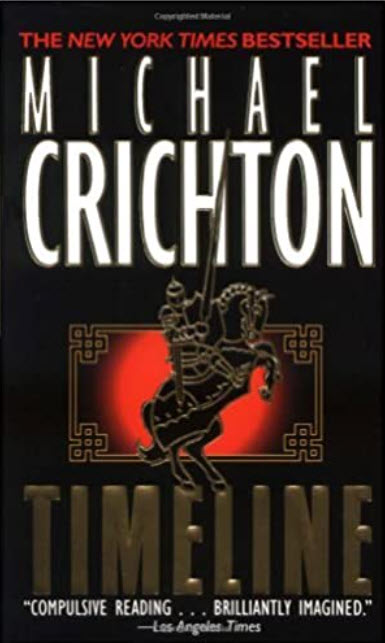 Timeline was first published in 1999 and, having read most of Crichton’s books, I head read it right away. I remembered it vaguely as a time travel thriller. So I picked it back up again a couple of weeks ago.

In France, a group of archeologists are studying a medieval village, complete with two castles and a monastery. All the buildings are ruins, of course, but they have a rich history dating back to the 14th century, while the Hundred Years’ War was raging, and England was routinely attacking and invading France.

Their research is being funded by a multinational corporation. The company is led by a self-obsessed science tycoon in his mid thirties. It has developed a technology based on quantum science that allows them to travel in time. When one of the archeologists goes back to 1357 and does not come back, the company coerces some of the young scientists to follow him and bring him back.

To avoid anachronisms, they are not allowed to bring any technology, modern weapons or any objects from the future. When they arrive, practically in the middle of a battle, trouble starts quickly and the race to get back home begins.

Timeline is less of a time travel novel, and more a historical novel. The majority of the story takes place during a mere 39 hours starting on April 7, 1357. The protagonists have to battle knights, solve riddles, and play the opposing parties of the war. The whole thing is reminiscent of an episode of the modern television series The Amazing Race: “And now the contestants have to invent gunpowder to impress Lord Oliver. They only have two hours to do it or they’ll be thrown in the dungeon and miss their chance to make it to the next stop.”

Timeline is a historical thriller with a neat plot twist, where scientists get to visit the heyday of the castles, the ruins of which they study in the 21st century.