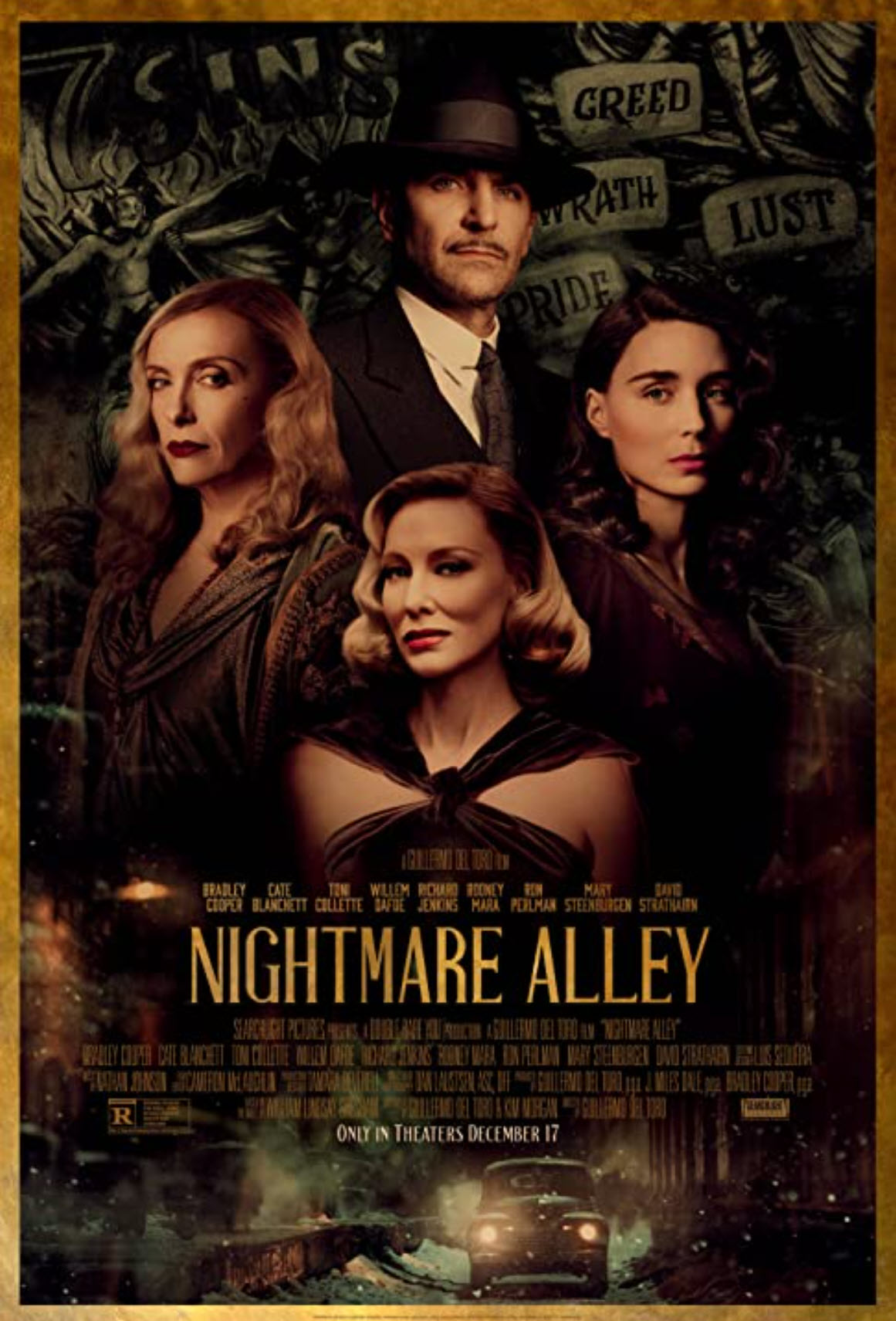 We like to go to a movie on Christmas Day in the afternoon. What were we thinking when we chose a movie titled Nightmare Alley to give us Christmas cheer?

Nightmare Alley plays in the late 1930s somewhere in America. Stanton Carlisle (Bradley Cooper) is a hapless young man who hates his father enough to make him freeze to death before he burns down his house with his body in it in the opening scene. As he escapes from the law, he ends up at a carnival by coincidence. Out of sheer desperation, he hires on and becomes a “carny.”

He learns quickly from his boss Clem (Willem Dafoe) and several other characters. The mystic Zeena lures him in, and her older and alcoholic husband Pete (David Strathairn) teaches him mentalism – appearing clairvoyant, revealing secrets about random people in the audience by verbal clues from an accomplice. He makes a name for himself in the carnival and is quite successful. Eventually he is put to he test by the female psychiatrist Lilith (Cate Blanchett) in the audience, who eventually becomes his accomplice and partner in crime in a series of ever more daring pursuits.

Watching Nightmare Alley is a nightmare. It is based on the 1946 novel Nightmare Alley by William Lindsay Gresham. In 1947, it was turned into a movie of the same name the same name starring Tyrone Power. So this is another remake. It’s over two and a half hours long, which is easily 45 minutes more than would have been necessary. It moves very slowly, and you never know where the story is going. For the longest time, there really does not seem to be a plot. It portrays the times in a moody and depressing light.

I learned what a “geek” is. Geek was originally an early 20th-century term for a carnival worker who was so unskilled that the only thing he could do at the carnival to entice an audience was to bite off the heads of live animals. Essentially, a geek was a socially undesirable person who lacked any skill or ability. Obviously, the term has morphed into something entirely different in the last three or four decades from those gruesome beginnings. But the geek in the carnival is more important than meets the eye at the beginning of the story.

This is a very well-done movie with an intricate plot and powerful cinematography which makes the experience depressing. It was too long. Too crazy.