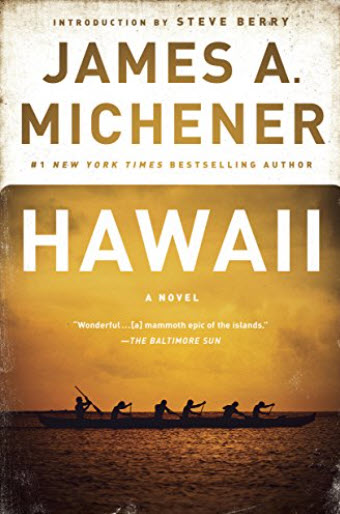 I first read this book in 1993 during my first ever trip to Hawaii. It’s a long book and I didn’t finish it during the one-week trip, but brought it home with me and worked through it. I had good memories of the epic stories.

So this year, on another trip to Hawaii, I decided to read the book a second time.

I enjoyed the introductory chapter of the formation of the Hawaiian Islands millions of years ago. The book brings to life how the islands were formed and how its flora and fauna became established. That chapter of the book is priceless and I still think about it every time I visit the Islands.

The next section describes in detail the lives of the islanders in Bora Bora and the surrounding islands in the South Pacific thousands of years ago. We learn what their lives were like, driven by superstition, and brutal beyond belief, particularly in their paradise-like environment. We find out what might have motivated those early islanders to make a trip by canoe, thousands of miles to the north, to eventually find and settle Hawaii.

I also enjoyed the journey of the missionaries from England in the early part of the nineteenth century, by brig, round Cape Horn and eventually to Hawaii. The book describes in excruciating detail the difficulties seamen encountered trying to round Cape Horn. The only other book that comes close to that I have read is Two Years Before the Mast by Richard Henry Dana – which I very highly recommend – particularly if you are a Southern Californian. You’ll never see the California coast the same way again after reading Dana.

When the missionaries finally arrived in Hawaii, at Lahaina in Maui, they immediately set to work destroying the culture and spiritual world of the natives, forcing the exploitative practices of the Christian religion upon the people. Descriptions of their methods and practices further foster my dislike of religions in general.

Abner Hale is the lead missionary on Maui, and he is a hapless, rigid puritan with a chip on his shoulder. Nobody likes him, but his relentless drive, and his industrious nature, get things done and moving forward. He hounds the natives and emotionally brutalizes them.

And then I got bored with the book. The religious lecturing goes on for dozens and dozens of pages, and at 25% I finally gave up. I remember it’s an epic work, I remember enjoying the book over 25 years ago, but those memories are not strong enough for me to endure another 75%. There are other things to read.

Not star-rated because I didn’t finish reading the book.