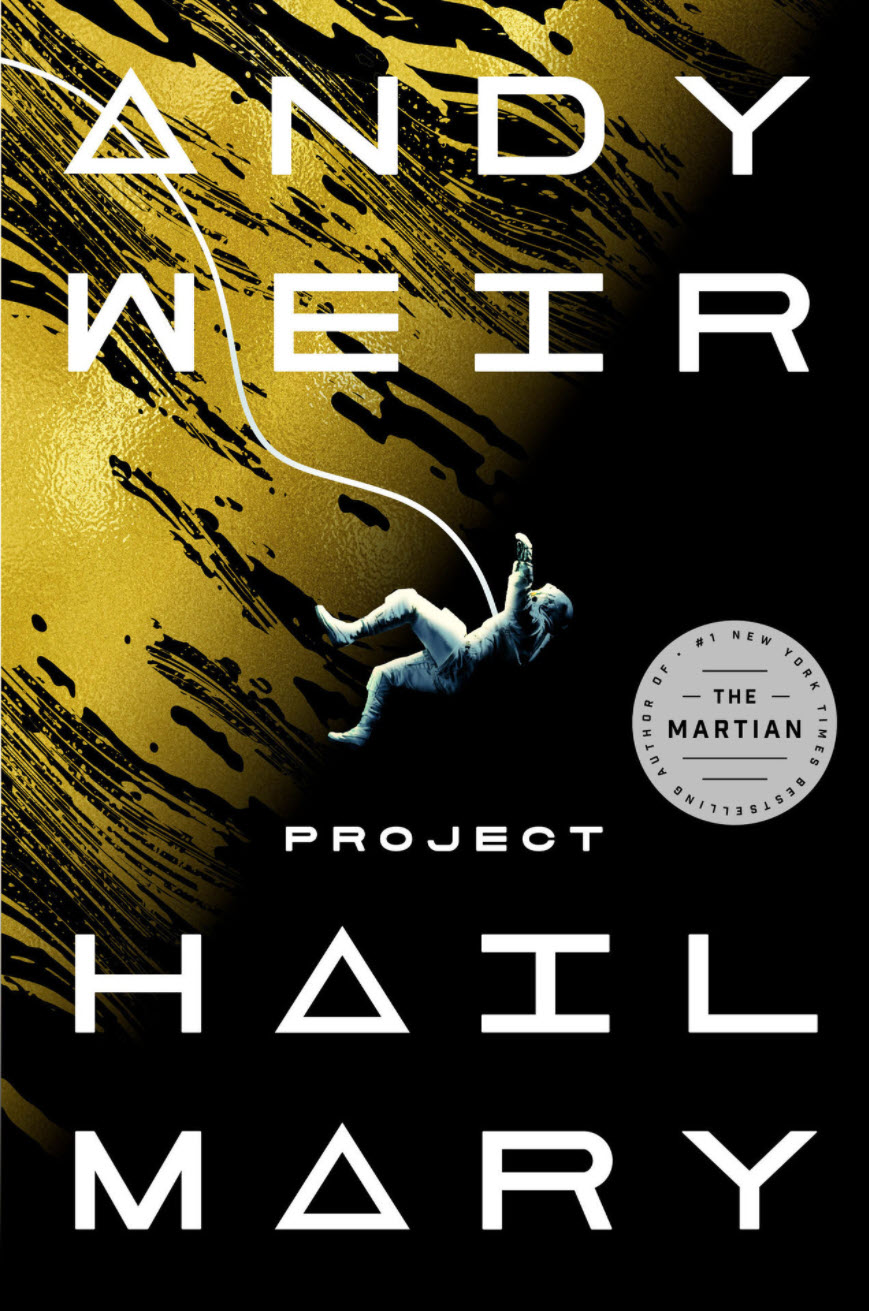 A man wakes up from a coma. He can’t remember who he is, where he is, and why he is there. He is tended to by a robot. He has a scientific mind, and he gradually figures out he must be in a spaceship, since the gravity is 1.5 g, which he determined by timing dropped objects. He is alone. The two companions with him on the ship are long dead and mummified. He figures out he was in an induced coma, probably to escape the boredom of a long journey.

But it gets much worse. After some observations of the stars around him, and the sun, he realizes that the sun is actually not the sun but some other star. Now he knows he is in trouble. The nearest star to the solar system is more than 4 lightyears away, so it must have taken decades to get to where he is. Decades alone in a spaceship.

Gradually, as his memory returns bit by bit, vignette by vignette of flashbacks, he learns his name is Ryland Grace, and he is a scientist sent on a one-way mission to investigate a solution to an existential problem at home: The sun is being drained of energy and the earth is rapidly cooling, Not only does he have to somehow survive alone, lightyears from home, his mission is actually to find a solution to save humanity and transmit his results back via high speed probes. It’s an impossible situation.

Andy Weir, who burst into the science fiction world with his first novel The Martian (which I reviewed here) has done it again. Project Hail Mary is one of the best and most satisfying science fiction stories I have ever read. Andy Weir’s stories play in today’s world, or in the very near future, perhaps just a few years off. All the technology in his stories is our technology today. There is Google and Facebook, there are laptops and iPhones. In near-earth orbit there is the good ol’ ISS. That’s the stuff Andy Weir’s science fiction is made of. He writes as the narrator in the present tense, which gives the story a feeling of rapid action.

Project Hail Mary is a page-turner that kept me riveted to the very end. It gets a solid four stars.

I recommend that you do not read beyond this point if you intend to read the book. You should read it first, and then come back here to find out some of the reasons why I think this is one of the best science fiction stories ever, and I’ll also talk about some of the plot holes or flaws of the story (there aren’t many).

By astronomical observations and triangulations he figures out he is at the star Tau Ceti, which is about 12 lightyears from earth. Tau Ceti turns out to be the only star in the local stellar neighborhood that is not afflicted by the energy loss that the sun experiences. All other stars are also dimming. But here it gets interesting. An alien space ship approaches him and starts interacting with him. On board is an alien that is the most interesting, in my opinion realistic and credible alien life. My bone to pick with alien stories is that the aliens are too humanoid, usually about the size of a human, and suited to be in the same atmosphere. This alien comes from a planet in the 40 Eridani star system, which is 16.5 light years from earth. Grace calls them Eridians. The aliens resemble large spiders, the size of a medium-sized dog, with a carapace of about 18 inches in diameter and about 10 inches high. It has five arms, each with “hands” that have three opposing claws. They use the arms or legs interchangeably. They have no eyes and no sense of vision, since their planet is pitch black due to a very thick atmosphere of ammonia. The pressure on their planet is 29 times that of earth. It would crush a human instantly. Their body temperature is 210 degrees Celsius or over 400 degrees Fahrenheit, so extremely hot. Imagine a creature that lives in 29 atmospheres of pressure with a body temperature of twice the boiling point of water, that breathes pure ammonia. There is no way such a creature would be able to survive a minutes in our world. And likewise, we’d burn up within seconds on theirs, and be crushed by the pressure and gravity.

The aliens have no vision, and all communication is via sound and echolocation, similar to whales. When Grace meets the alien, they quickly establish a way to communicate and learn each other’s languages. Over weeks, they build a sufficient mutual vocabulary to actually communicate productively. That done, they get to work on solving the existential problems of both their home worlds.

Some of the problems I had:

The Eridians do not know about radiation. They have no vision. There is no light on the surface of their planet. So how did they ever develop astronomy and space travel?

The technology of the Eridians is described as equivilent to that of earth in the 1950s. They have not yet invented the semiconductor or even the transistor and as a result they don’t have computers. However, their materials science is amazing and they can build just about anything from a simple raw material which is stronger than anything humans can build. They have robots. How can you have robots if you don’t have electronic processors?

There is one short episode back on earth where two brilliant scientists hook up and have a sexual relationship. It’s just a few pages of description, it’s pretty awkward and unrealistic, and it has nothing at all to do with the plot. Weir should have just left that part out.

Then there is the way Weir ended up on the mission. That was too dramatic and unrealistic, and he could have written the story without that twist and it would have been more credible. Yes, the amnesia he initially experienced after waking up would not be there, but so what. The story would have worked just as well.

But that’s all I could find that I had issues with. I like the science in this story, and the plot holes I described above are minor enough that I can accept them.

The description and depiction of the alien, however, is superb. The Eridians are the most realistic, credible, exotic and yet totally plausible aliens I have ever read about.