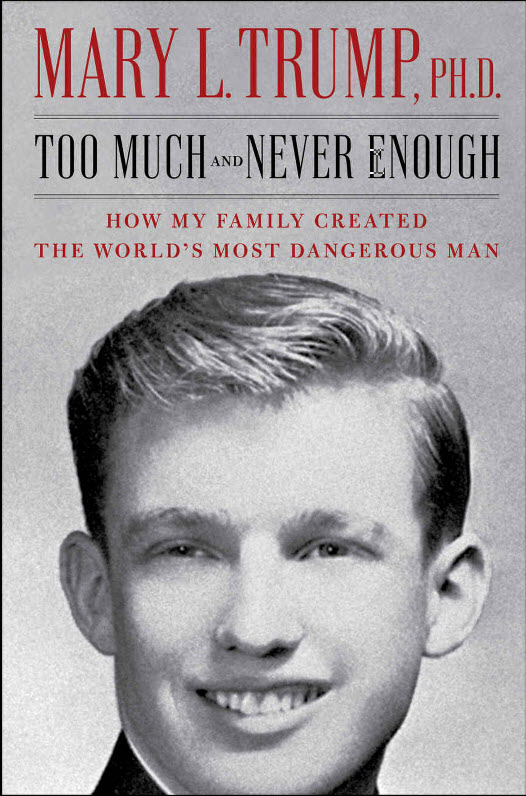 Mary Trump’s tell-all book about her brother Donald Trump sold 1.35 million copies in the first week after publication. My copy was one of those.

Mary is an educated professional, a psychologist and a very good writer and story-teller. She is the oldest daughter of Trump’s oldest brother Freddie, who died very early in life. She has unique insight into the upbringing and lives of the five Trump siblings by her grandparents. Of course, Trump and the White House tried to stop publication of this book. Trump tweeted:

“Mary Trump, a seldom seen niece who knows little about me, says untruthful things about my wonderful parents (who couldn’t stand her!) and me, and violated her NDA,” Trump wrote on Twitter. “She’s a mess! Many books have been written about me, some good, some bad. Both happily and sadly, there will be more to come!”

Some Trump supporters have called the book a “book of lies” but I doubt that when they say this they have actually read it.

There is nothing scandalous about it. It just tells the story of a family in Brooklyn, led by an autocratic and self-absorbed man, Fred Trump, who build a billion-dollar real estate empire, and who shaped Donald Trump into the person we see today.

If Trump hadn’t ascended to the presidency, none of this would have been interesting to anyone, and the Trump Organization would have gone on doing what appears to be shady business for decades to come.

But that is not how things went.

Here is an except:

Donald was to my grandfather what the border wall has been for Donald: a vanity project funded at the expense of more worthy pursuits. Fred didn’t groom Donald to succeed him; when he was in his right mind, he wouldn’t trust Trump Management to anybody. Instead, he used Donald, despite his failures and poor judgment, as the public face of his own thwarted ambition. Fred kept propping up Donald’s false sense of accomplishment until the only asset Donald had was the ease with which he could be duped by more powerful men.

There was a long line of people willing to take advantage of him. In the 1980s, New York journalists and gossip columnists discovered that Donald couldn’t distinguish between mockery and flattery and used his shamelessness to sell papers. That image, and the weakness of the man it represented, were precisely what appealed to Mark Burnett.

Too Much and Never Enough is a very readable book, not too long to become a tedious read, and it explains Donald Trump. What he does, how he acts, and more importantly, what he doesn’t do or say just makes sense after having read this book.

I would highly recommend it to everyone, both Trump supporters and the rest of us.