We have now been confined to our homes for almost five months with no end in sight. The pandemic is raging in the US, and California has the highest numbers. The country’s gross domestic product (GDP) dropped 32% per today’s news, which is by far the largest drop ever in history – since we have been measuring GDP. I understand how this happened. I have probably filled up the gas tank in my car three times all year. I have not been in an airplane or in a hotel room in five months. This has not happened in 40 years before. I have not bought anything of significance. There is no place to go, and eating out is a hassle. It has made me turn to the simpler rewards, and rewarding they are.

For instance, last weekend Trisha brought home a little bag of sunflower seeds. I planted six of them in a pot and watered them twice a day.

Here are all six sunflower sprouts after just five days of nurturing them.

Check out the ones at 1:00 o’clock and 3:00 o’clock. They still have the seed shell on top of the leaves. The sprouts pushed up the shells with them. I will let them grow to six inches, and then I’ll plant them near the fence. They are the kind that grows to 12 feet. I am so looking forward to that.

Then, a few days ago I was out by our wall trimming the hedges and pulling out dead wood. All of a sudden a bird’s nest fell down. I didn’t even realize there was a nest in that bush, but as it fell to the ground, it was too late. Four little baby birds were screaming, and the blue jay parents were fluttering about overhead in frightened anger and pain.

There was no way to get the nest back up into the bushes securely enough. So we quickly found a box, put the nest in it, and scooped up the four baby birds and put them into the box and stuck the box into the hedge on the wall. Then we left them alone.

Within an hour, one of the babies had climbed out of the box, jumped the six feet to the ground and tried to squirrel away. We caught it, put it back, but by that time it was dark. The next morning, only three babies were left. By the following morning, only two were left, but they seem to be steady and doing well. I feel very badly to have caused the demise of two of them, albeit accidentally.

We looked up how to feed baby blue jays and actually gave them some softened cat food pellets, and they liked them. We didn’t know if the parents would come back and take care of them, so we were determined to keep them alive if we had to. We can see the box right outside our kitchen window, and we have meanwhile spied mom or dad in the box.  The two remaining babies look good. We’ll let mom take care of them now, but we’ll surely keep taking their pictures: 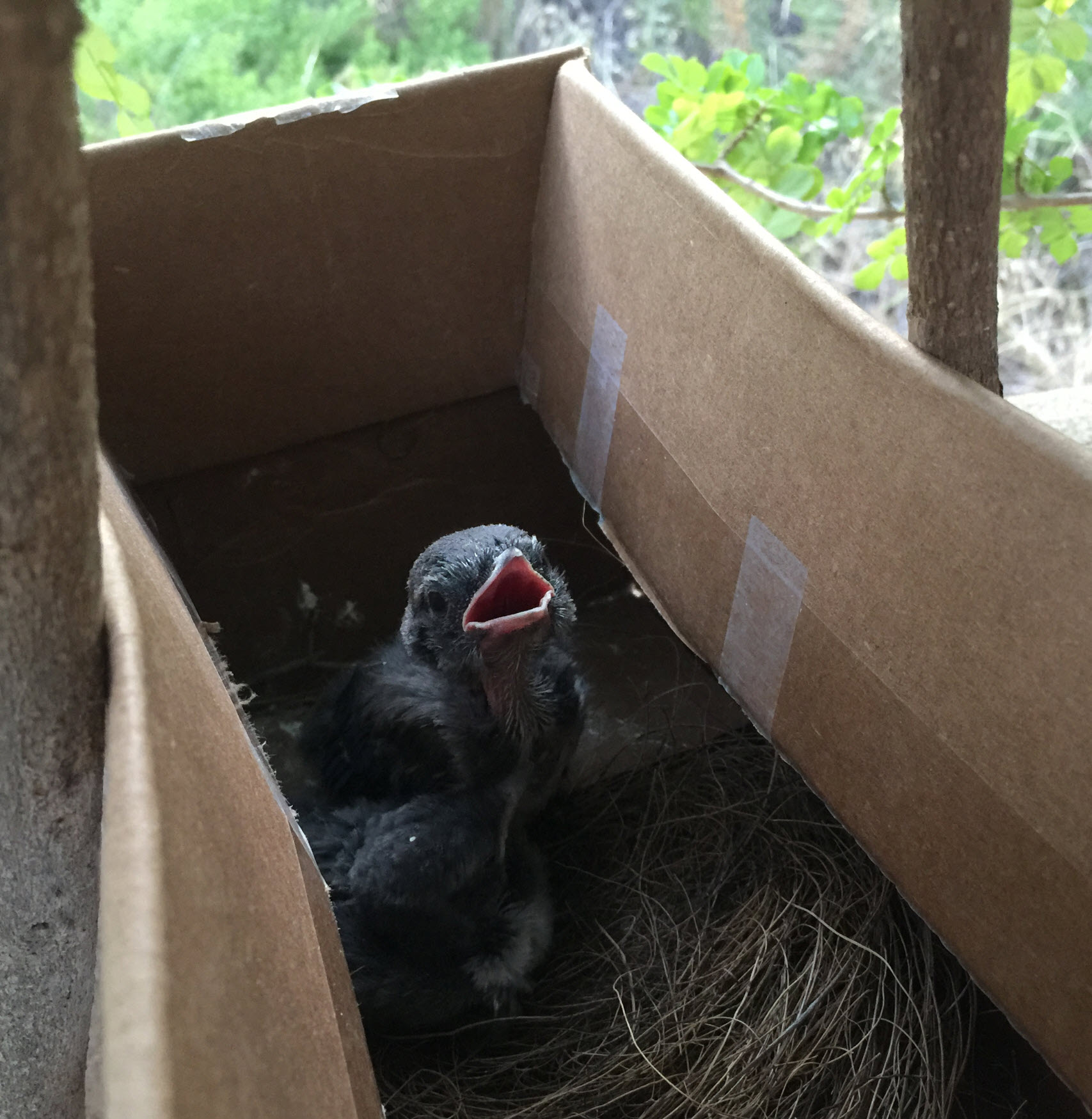 Here is one of the little ones. The other is lying down next to it on the left.

The rescued baby birds and the sunflower sprouts are the simple pleasures in life that seem to be more rewarding than all the gross-national-product trappings we are conditioned to need. I am looking forward to showing off our blue jays here as they grow up.

2 thoughts on “Sunflowers and Blue Jays”